When was the last time you bought a physical product that delivered an awesome experience? If you’re a Onewheel rider, you probably know the answer. Onewheel is a personal electric transportation vehicle that looks something like a powered skateboard, but feels much more like snowboarding on fresh powder.

Onewheel is the creation of Kyle Doerksen, founder of Future Motion and inventor of Onewheel. “I grew up in western Canada and I loved that floaty feeling of snowboarding on powder and I wanted to have that experience while riding around town.” .

Product innovators like Doerksen and Future Motion are typically leaders in their space, bringing a vision to physical form and creating a market where none previously existed. But being first to market doesn’t necessarily guarantee long-term success. Future Motion has to move quickly to stay ahead of the fast-followers looking to cash in with copycat ideas. That means constantly innovating to make the Onewheel go faster and farther than the competition. To get there, Future Motion relies on rapid prototyping with 3D printing as a big part of its design philosophy.

Doerksen relates, “When it came to building Onewheel, one of the things I was excited about was that we could actually use 3D printing to make components that we could bolt onto a Onewheel and test ride right away. So we’ve used FDM® type prototyping extensively from the very first Onewheel prototypes.”

Engineering an experience like snowboarding when you’re actually rolling over city streets takes a lot of trial and error. Some design ideas can’t be validated with just a CAD model; they simply need to be tried out, often through multiple iterations. It’s another reason why Future Motion engineers rely on FDM 3D printing. “The ability to 3D print can definitely decrease the time it takes to iterate,” says engineer Beau Robertson. That kind of rapid idea development is what helps Future Motion keep the competition at bay.

“We use 3D printing literally day and night and it just helps us move really quickly. People see our success, they want to copy us and try to outdo us in one way or another. So we’re using 3D prototyping to quickly advance our product”

Functional prototyping gets more demanding when the product is a moving vehicle, even a small personal electric vehicle like the Onewheel. Designed to emulate the carving action of a snowboard or surfboard, it’s inevitable that riders will want to push their Onewheel to do more. 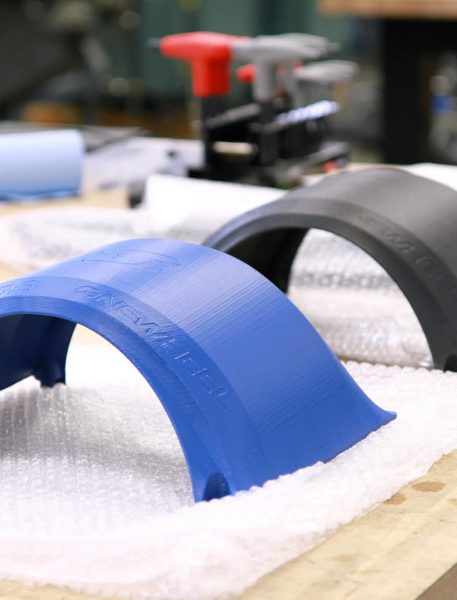 Two of Onewheel’s key structural parts are its aluminum side rails. But trying out a new rail design calls for time-consuming machining, and puts the brakes on fast idea implementation. As a solution, Future Motion went back to their FDM rapid prototyping philosophy but this time, employed FDM Nylon 12CF™, a carbon fiber-filled thermoplastic strong and rigid enough to support a Onewheel rider.

“The nylon-12 (carbon fiber) gives us the ability to prototype a part that we would typically want to machine out of aluminum, and be able to test it and use. We can iterate more quickly this way,” says Robertson. 3D printing with carbon fiber nylon that’s strong enough for functional prototyping lets Future Motion innovate fast and refine the Onewheel, helping maintain their market leadership.

Doerksen believes they’ll expand the use of 3D printing as new materials become available. Their current FDM printers “are workhorses,” giving Future Motion the capability to produce the parts they need. But as Doerksen relates, “Now the frontier for us is really prototyping in these new materials that are stronger and higher performance, and let us do things that we could never have done before.”

FDM Nylon 12CF™ is a carbon-filled thermoplastic with excellent structural characteristics. The material is comprised of a blend of Nylon 12 resin and chopped carbon fiber, at a loading of 35% by weight.

This combination produces one of the strongest thermoplastics in the FDM® material portfolio. It has the highest flexural strength of any FDM thermoplastic, resulting in the highest stiffness-to-weight ratio.

"We can print a piece that previously only metal would have been strong enough to meet our performance needs. Now we can print it out of carbon-filled nylon and actually bolt that up and ride it, which really helps us work faster and try new things."

More Canadian manufacturers will have access to metal 3D printing, thanks to Javelin and Desktop Metal

Taking the lead in Smartphone Mounting System design with SOLIDWORKS

The Rapid Prototyping Shop of the Future

Shaping the Talent of Tomorrow with 3D Printing