The saw-wielding, flame-throwing BattleBot uses Desktop Metal Studio System parts that can withstand the demanding environment of the battle arena and adhere to the competition’s strict build timeline.

BattleBots® is a televised robot combat tournament that challenges teams of engineers from all over the world to design, build, and control a robot—demonstrating creativity, engineering skills, strategy, and driving ability. Each robot must be no more than 250 lbs with at least one independently-powered weapon. Robots fight in a closed arena surrounded by bullet-proof glass, going head-to-head to avoid elimination and get closer to the championship title.

When designing a robot, teams consider several factors that will determine its ability to beat the competition while withstanding various obstacles built into the arena. These considerations include:

The design of each component is critical to the robot’s overall performance while the limited development timeline leaves little room for iteration.

Comprised of MIT engineering students and graduates, Team SawBlaze is a Boston-based competitor whose robot’s weaponry includes a diamond abrasive rescue saw blade and flame-thrower. The blade is mounted to a controllable rotating arm that positions the saw at the front or back of the robot. This helps to stabilize the machine while enabling a bi-directional offensive. The flame-thrower emits green flames at 350°C in the direction of the saw’s target, delivering “slash and burn” blows to the opponent. 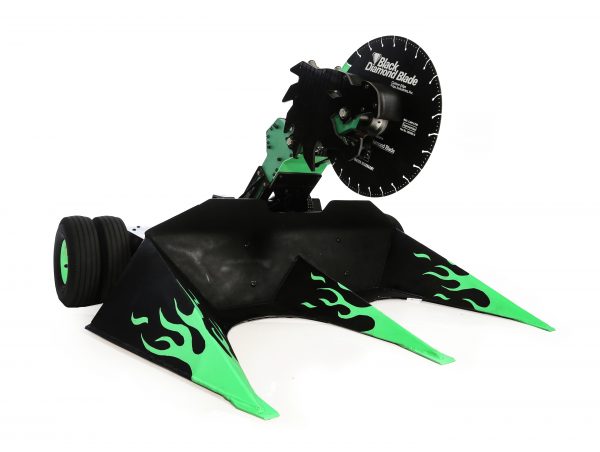 The 2018 season featured the shortest build calendar ever, allowing just one month to build and ship the robot. Each component plays a critical role in the robot’s ability to perform, so the more design iterations the team is able to do before the final build, the better. Jamison Go, Mechanical Engineer at Desktop Metal and Battlebot SawBlaze team captain, saw an opportunity to leverage the benefits of metal 3D printing with the Studio System—including design flexibility, rapid iteration in-house, high-performance materials, and reduced production costs—in order to spend more time fine-tuning custom parts for the robotic assembly.

“In contrast to most BattleBots robots that apply brute force, SawBlaze applies precision damage. This strategy is much more difficult to execute. Working against a limited development timeline, our processes must be extremely efficient in order to achieve an optimized and consistent strength-to-weight ratio as the robot moves and comes into contact with the competition.”

One of the key components of the SawBlaze robot is the backstop: a sub-assembly that straddles and protects the blade. As various loads are applied during battle, the backstop must demonstrate stiffness, strength, hardness, corrosion resistance, and heat resistance. 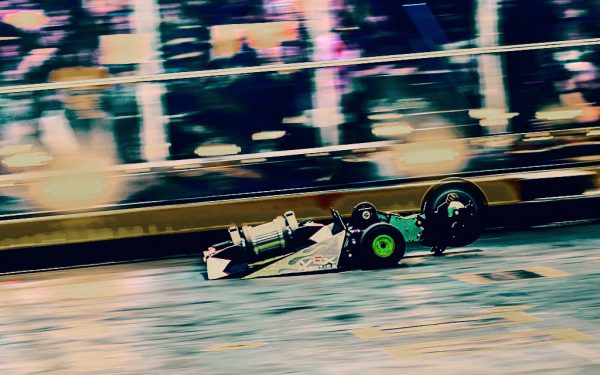 As a structural component, it must be able to resist bending and lateral motion while being as lightweight as possible. The team considered multiple fabrication processes to print the two end pieces that would be later assembled with the metal cross-bar.

With a limited timeframe and budget, the fabrication method is an important consideration—particularly for custom parts like the backstop. The cost and lead time introduced with third-party manufacturers leaves no room for iteration, while the design limitations of machining in-house would jeopardize part performance and introduce a significant opportunity cost due to the number of manual steps required.

The challenge of achieving lightweight strength made the backstop an ideal candidate for metal 3D printing. The team designed the part with “cut-outs” and leveraged closed-cell infill throughout the part to eliminate excess material and reduce its weight in techniques that are impossible with other manufacturing methods.

The two ends of the backstop were printed in AISI 4140 low-alloy steel with the Studio System and then fastened to each end of a metal cross-bar. 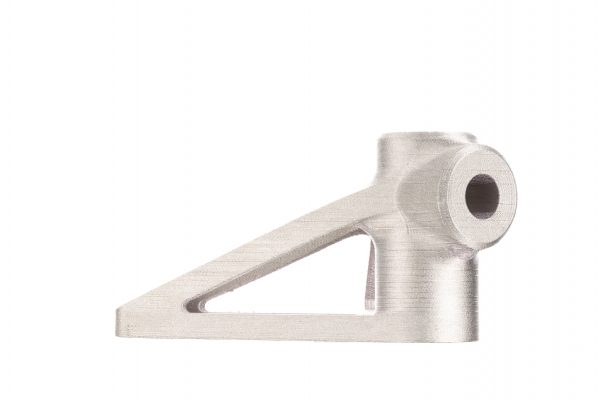 Achieving a 90-95% reduction in part cost and reducing the part’s weight, the Battlebot SawBlaze team was able to leverage the benefits of in-house metal 3D printing process to produce a strong part that is ready for the arena. Throughout the tournament, the Studio System-printed backstop functioned flawlessly, withstanding repeated and varying stresses without failure. SawBlaze successfully fought and won multiple battles—its first victory: a knockout in just 94 seconds.

Watch the full video below:

The Desktop Metal Studio System is the world’s first affordable, office-friendly metal 3D printing system. Safe and simple to use, the Studio System was designed to bring metal 3D printing to the shop floor by allowing engineering and design teams to make metal parts faster, without the need for special facilities or dedicated operators.

Featuring a cloud-based software architecture, the Studio System enables the user to go directly from CAD to part. By having one software platform across the system, designers and engineers can work with one digital file for a metal part throughout its entire lifecycle instead of needing to use 3rd party equipment and software to get a final part.

Stamping Dies and Tooling 3D Printed for the Manufacturing Floor

How to Inject Metal Additive Manufacturing into your Company

How to make your prototypes realistic – but not too realistic!