“Run Happy” is more than a slogan at Brooks Running; it’s a state of mind. “Everyone here runs,” said Kenny Krotzer, associate footwear developer at the company, based in Seattle, Washington, “even the CEO. He wasn’t a runner before joining the company, and now he’s a die-hard.” But staying ahead of the curve in shoe design and technology requires nothing short of fancy footwork.

“We’re working on two to three seasons of shoe designs at once. We’ll get files for all five fall shoe designs in a two-day window and then have two days to get them printed and confirmed.” Brooks’ overall process “was a bit of a nightmare,” said Krotzer. “Lots of waiting, missed deadlines, things piling up.”

Design validation is a huge component of the business, according to Krotzer. Product fit and functionality come first, but design is a close second. “There’s a lot of give and take in shoe design and the ability to quickly change a concept is key.” Brooks’ designers create seasonal models, which are sent to Asia for conversion to CAD files. The designs are reviewed back in the U.S., prior to 3D printing an outsole and midsole prototype. Before their ability to 3D print in-house, the footwear company used a local service bureau for prototyping, jockeying to get a place in their queue to meet tight deadlines. Printing on-site means the company doesn’t have to get in line with a vendor or pay a rush fee, saving thousands of dollars per season. 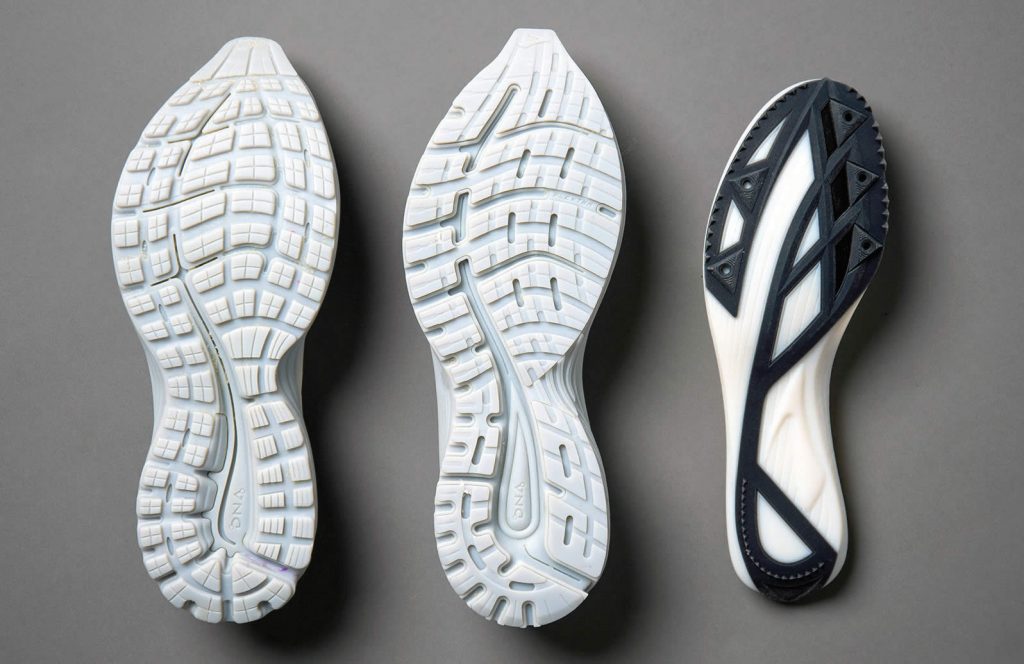 After purchasing a Connex3™ 3D Printer for in-house prototyping, Krotzer admits that daytime running breaks aren’t the only thing keeping employees happy at the footwear company. “We aim to build the best performance product on the market and now we have a new tool to help us get there. Our 3D printer has revolutionized our entire design validation process,” said Krotzer. In addition to saving time during the design iteration process, the company also saves $500 to $800 per shoe design.

The large print bed on the Connex3 enables Brooks to print four to five outsole, midsole combination prototypes at a time. “We’ve seen the number of project delays drastically reduced now, thanks to our eight-hour turnaround time. Even with redesign, we can get files, prototypes and review them all within a 10-hour span. Design validation literally takes half the time with our 3D printer,” Krotzer says.

For now, Krotzer says their 3D printer saves Brooks “untold time and headaches” during the design validation process. “There’s such freedom with having it, the ability to set up a redesign to print overnight and it’s ready in the morning. And as for colour,” Krotzer said:

“We’ve only scratched the surface. Our Connex3 has the capacity to print dozens of colours and while we only need black, white and gray right now for our outsoles and midsoles, that could change someday.”

Krotzer is hopeful fully-functional prototypes could be a part of Brooks’ 3D printing future.

The avid runner and footwear developer doesn’t hesitate to look forward to a time “when that’s where we will have to go to stay relevant. Pushing innovation. We look to Stratasys for that and I can’t wait for a material that could mimic the materials we need for the entire shoe. That’d be awesome. Just think, we could print fully-function prototypes, then head out to the trails and take them for a spin. We’re already a pretty happy place, but just imagine that!” Krotzer said.

“We’ve seen the number of project delays drastically reduced thanks to our eight-hour print time. Even with redesign, we can get files, prototypes and review them all within a 10-hour span. Design validation literally takes half the time with our 3D printer.”

How do Automotive Manufacturers Speed Designs to Market with 3D Printing?