Extreme sports equipment 3D printed with the Stratasys Origin One

The world of sports equipment is constantly evolving, and technological improvements are key to maintaining competitiveness, but manufacturers are struggling to keep up with changing customer demands. Two designers, drawn together by their passion for snowboarding and the technology and design behind snowboarding gear/equipment, decided to take matters into their own hands and create a customizable, 3D printed solution. Slicelab and f=f design studios came together with the Stratasys Origin One and Henkel Loctite teams to reimagine an integral part of snowboard bindings: the high back.

A snowboard high back is the piece of the binding that rises up and supports the rider’s lower calf, helping the rider steer the snowboard by using it as a lever to change the snowboard’s angle. The better the part’s design, the more control the rider has.

The design team selected Stratasys Origin One for its ability to print extended bridges and steep overhang angles without compromising on quality— reliably producing parts that are indistinguishable from injection molded. Another key differentiator, supporting the excellent print quality, was its extensive material catalog. These capabilities ensured that the print would be successful and economical, in terms of materials and energy used. The Origin One customer support team was highly active in assisting the designers in troubleshooting design iterations, ensuring a perfect print, and selecting the right high impact, flexible, aesthetic Henkel Loctite’s IND 3172, to meet the project’s requirements.

There is no current market offering for custom-built snowboard bindings—the best option is to buy a few different versions from a variety of companies and test out what works best for each snowboarder. The Slicelab, f=f, Stratasys and Henkel collaboration was born from a dream of swappable high backs, which would allow individual riders greater control over their snowboards and could be changed out quickly.

“Being a longtime boarder and Colorado local, I have noticed how much technology has played a role in winter sports, in terms of durability, performance and especially comfort and convenience. We began to develop a proof of concept for this idea of being able to switch out custom pieces of gear that would be tailored to the rider’s daily preference and everchanging weather conditions, like using low light goggles vs. full blackout reflective ones, depending on what the forecast shows prior to hitting the mountain,” said Diego Taccioli, Co-founder and Designer at Slicelab.

Slicelab and f=f designed the snowboard high back to support one of Slicelab’s founders, Diego Taccioli, and his desire to be able to ride mountain runs, then visit the terrain park to practice jumps, spins and other tricks on the same day. His preferences and physical stature were used to tailor the piece to match weight, strength, impact and flexibility factors determined during 3D modeling with FEA tools.

An internal lattice support structure allowed variable flexibility throughout the piece, which would be impossible to produce with injection molding, the usual manufacturing choice for snowboard binding components. To have a successful outcome, only a 3D printer would do—and that printer would need to be compatible with a high-performance material that could take the extreme impact and flexion required. The printer would need to be able to handle a tall print with significant architectural challenges—a legitimate “torture test” for any manufacturing technology. The final requirement: have it done by the following week, when Taccioli was set to shred. 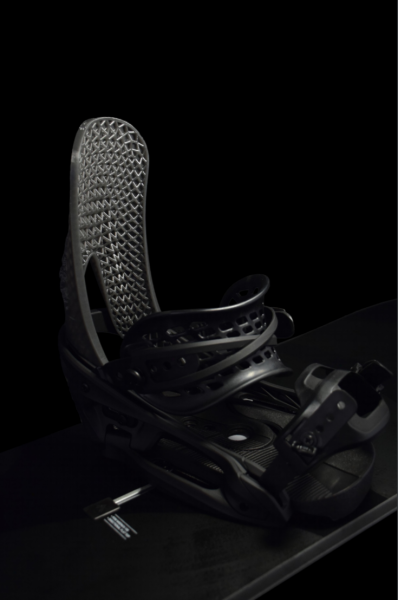 Stomp the landing with Stratasys Origin One and Henkel Loctite.

The groundbreaking plan for the lattice high back kept the final design super light and gave extreme control over which areas would be able to flex and which would stay rigid during usage of the product. Slicelab and f=f then added reinforcement to the highest stress areas by building out a model of the Rocky Mountains in Colorado over the otherwise smooth back, which added needed strength and personalized aesthetic appeal.

The Stratasys Origin One, a high-speed, accurate production printer, utilizes Programmable PhotoPolymerization, or P3™, which enables incredible accuracy and durability, while also accelerating print time. These superior capabilities allowed for significant overhangs and bridges that other 3D printers and hardware would be incapable of without failures or defects. The whole piece was printed with just one single support, to preserve the end look and feel while conserving material. The entire project was also able to go from CAD file to clipped in and ready to ride in just under fourteen hours.

The high back was printed with a material formulated to prioritize impact strength and resistance, without compromising on surface finish, that is also tappable and polishable. Henkel Loctite IND 3172 is rated at 1400 MPa and allows for 100% elongation at break, which ensured that the piece was in no danger of snapping or warping during use, which is key for rider safety and total product success. But what about cost? When comparing the outcomes of 3D printing against what could be expected with injection molding, the results were financially comparable, with several benefits falling in 3D printing’s favor, aside from the viability of the product. The ability to rapidly produce a product in under a day, from design to completion, cannot be overstated. Additionally, printing allowed for 57.96 grams of material to be conserved. The final kicker was the lack of shipping time and cost—the Origin One is small enough to be kept in an office, instead of sending parts overseas or to a factory for creation, so the project could be completed locally.

While commercially available snowboard bindings are currently made with injection molding, 3D printing this binding part allowed for lighter weight, greater control components and better support where the rider needed it. The Origin One’s comprehensive— and growing—materials catalog also enabled the usage of the best material for the job, and the strong partnership between Stratasys and Henkel Loctite enabled world-class support of the designers throughout the process.

The real test? Breckenridge resort in Colorado. Taccioli was able to make his snowboard plans and try out the high backs on several courses; they performed exactly as desired.

“With additive manufacturing being where it is today, it’s possible to forecast that less hardware components or sizing adjustment features would need to be built into products in the future,” explains Taccioli. “Being able to plug in the mechanical properties of the material into parametric software allows us to simply tweak a few inputs to generate geometry for any type of difference in performance we are looking for, whether it be a casual day of riding or an intense powder day.”