Learn how Rutland Plastics production of jigs and fixtures were 3D printed in a fraction of the time and cost on their Objet 3D Printer without tying up their CNC machinery.

Rutland Plastics is a custom injection molding company located in Rutland, United Kingdom that produces products for a wide range of companies and industries. Because each project is unique, Rutland must create complementary jigs and fixtures to position and hold the project’s components during manufacturing operations like assembly, gluing, drilling, and measuring. They are important because they streamline the production process, help employees become more efficient, and ensure consistency of the final product.

However, as the company grew, its practice of creating jigs and fixtures became a burden. Rutland traditionally made approximately 100 new jigs and fixtures annually from aluminum on its CNC milling machines. This process cost $1,500 per piece or $150,000 per year. But the true cost to the company was far greater. Each new jig and fixture also took 3 days to create. This meant that the company was precluded from using at least one of its machines to generate revenue for 300 business days.

Another problem was that Rutland’s engineers were constrained by the CNC machine’s inability to produce jigs and fixtures with sharp corners and deep contours. As a result, the jigs and fixtures were not optimized for the specific need they were meant to address in the manufacturing process, which created the need for additional adaptive work or support tooling.

Finally, identification labels and felt pads had to be manually added to prevent loss and inadvertent scratching of production parts respectively.

Rutland had originally purchased a PolyJet™ 3D printer to produce rapid prototypes but then realized it was also an ideal platform for producing jigs and fixtures. 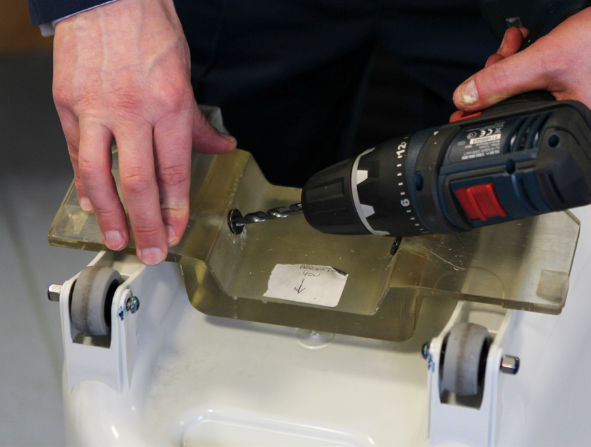 With the assistance of PolyJet technology, Rutland became able to produce jigs and fixtures with exceptional surface finish and intricate detail, benefits which were unattainable via conventional milling machines. Plus, Rutland’s engineers were able to leverage the 3D printer’s multi-material capability to produce rubber-like surfaces that would cushion and protect production parts that came in direct contact with the fixture. Identification labels were also added to ensure jigs and fixtures were not lost. What’s more, all of this could be accomplished in a single build on the 3D printer thereby eliminating additional steps.

By taking full advantage of their 3D printer, Rutland was able to reduce the cost of producing jigs and fixtures and reclaim its CNC machines exclusively for revenue generating processes. In total, the switch reduced Rutland’s per-fixture cost from $1,500 to $900 or from $150,000 annually to $90,000 — a $60,000 (40%) savings. It also allowed Rutland to add 300 production days for one CNC machine back into its annual operations plan.

Finally, the company was able to produce customized jigs and fixtures faster than ever before by using the 3D printer — a 66% time savings compared to CNC milling. Now, engineers can literally design a fixture during the day, print it overnight and have it ready for use the next day. As Carl Martin, Technical Manager for Rutland Plastics put it, “We can now produce jigs and fixtures in a fraction of the time and cost on our Objet 3D Printer without tying up production machinery.”

“Plus, we don’t have anymore machining constraints. We can literally print something that we couldn’t have manufactured any other way,” adds Simon Grainger, Rutland Plastics’ Design Engineer.