Schneider Electric relies on a Stratasys F123 3D printer for a range of production applications, including assembly-line tools, jigs, fixtures, robot grippers and other end-of-arm tools — all of which were previously outsourced to third parties and produced using expensive injection molding or CNC processes.

Schneider Electric is a global manufacturer and provider of energy and digital automation solutions for efficiency and sustainability. The company combines state-of-the-art energy technologies, real-time automation, software and services into integrated solutions for homes, buildings, infrastructures and data centers. Embracing the rise of Industry 4.0, Schneider Electric has embarked on a large scale implementation journey: the ‘Smart Factory’ project. The strategic move aims to increase production efficiency while reducing costs, as well as strengthening the company’s competitive edge and ability to deliver innovation. Since the program’s inception, additive manufacturing has played a key role in achieving this goal.

A prime example of this is Schneider Electric’s plant in Puente la Reina, located in Navarra, Spain. A division of Schneider Electric España SA employing around 250 people, this facility specializes in the manufacture and assembly of electrical apparatuses and equipment, including light switches, sockets and other related products of New Unica, Odace and Ovalis ranges. With efficiency enhancement central to its value proposition, the plant has always been at the forefront of innovation within the group and was one of the first to incorporate automation within its manufacturing infrastructure. Fully embracing the Smart Factory initiative from the outset, the team at Puente la Reina turned to industrial-grade additive manufacturing to speed up its Industry 4.0 transformation. 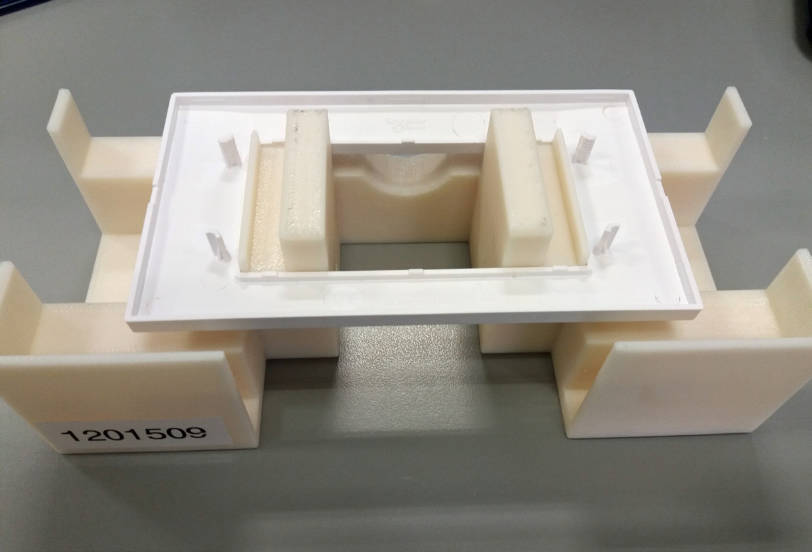 “The inherent benefits of additive manufacturing for cost-effective, low volume production made it the ideal solution for our tooling needs. This is an area where we saw huge opportunity to optimize efficiencies given much of it was outsourced,” explained Manuel Otamendi, Industrialization and Maintenance Manager – Global Supply Chain at Schneider Electric’s Puente la Reina plant.

After testing several 3D printing technologies, the team decided to invest in Stratasys FDM Technology™. “We found it provided the most reliable and repeatable production method for 3D printing a range of manufacturing tools on the factory floor.”

“Not only are we able to efficiently produce our manufacturing tools in-house, but we now also have the capability to design the tools we need in the exact shape, size and quantity required.”

As a result, Schneider Electric purchased a Stratasys F170™ – a cost effective, industrial grade FDM 3D printer. The large range of engineering-grade thermoplastics available are ideal for both design and production applications. The 3D printer was put to work immediately and became a staple workhorse on the company’s factory floor. 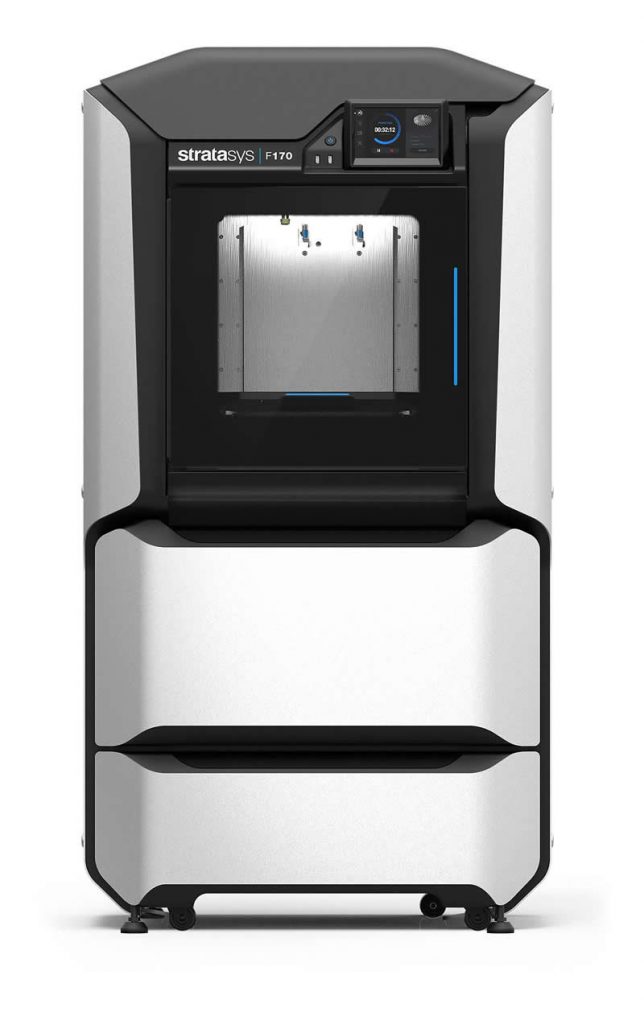 Otamendi explained, “We bought the Stratasys F170 to produce a limited number of tools, but once we got it up and running, we realized how advanced it was and the potential to extend its use to a much wider range of tooling applications across the production line. We’re now cranking out over a hundred new designs a year.”

Schneider Electric relies on the Stratasys F170 for a range of production applications, including assembly-line tools, jigs, fixtures, robot grippers and other end-of-arm tools – all of which were previously outsourced to third parties and produced using expensive injection molding or CNC processes. The company uses Stratasys PLA, ABS and ASA materials to replace a wide array of previously aluminum tools. One such example is the production of grippers for robotic arms. Leveraging its Stratasys F170 3D Printer, the team discovered a method to not only improve the performance of the robots, but also secure major cost savings. 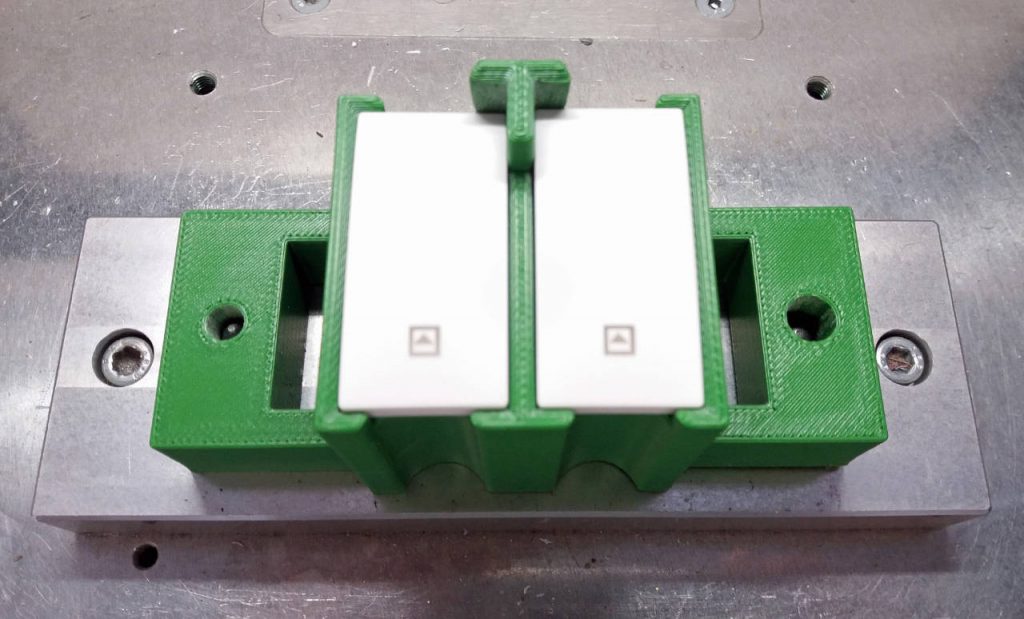 “It’s not uncommon for aluminum parts of the mold to break when they collide, and when they do, be very expensive to replace,” explained Otamendi. “To circumvent this, we are now able to replace costly aluminum grippers for robotic arms with 3D printed alternatives using PLA.”

The 3D printed tool offers the same mechanical performance properties as the traditional tool, and helps protect more expensive aluminum parts when the molds collide. “Should the 3D printed tool break, we can quickly 3D print a lowcost replacement within hours. To put the cost saving into perspective – outsourcing a machined gripper used to cost us 200 euros per tool. Now we can 3D print one on-demand for around 100 euros each,” Otamendi said.

“Additive manufacturing has transformed the way we work and changed our entire mindset in terms of the way we think about doing things in the future.”

“Another great application are the tools used for our hand presses – we’re able to design and 3D print both the bottom and upper part of the tool, tailored to each specific final product to increase performance,” said Otamendi. “Not only are we able to efficiently produce our manufacturing tools in-house, but we now also have the capability to design the tools we need in the exact shape, size and quantity required.” 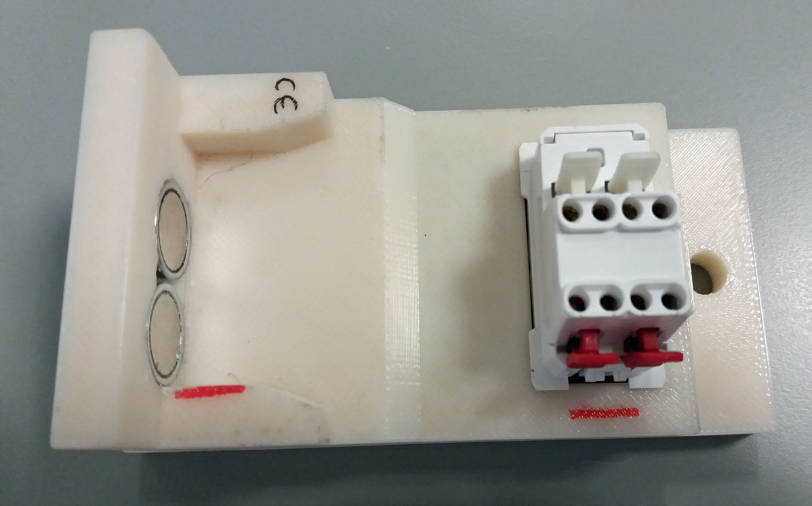 “In the past year, using Stratasys FDM additive manufacturing we’ve achieved a saving of about €20,000 in the production of assembly-line tooling alone,” he said. “The time-savings are equally important to us as a business. Using the Stratasys F170 we’re able to produce new high performance tools in just one day, whereas it would have taken at least one week to outsource the same tools previously. This reduces our dependency on suppliers and gives us much more control over tool production, which has increased the overall flexibility of our manufacturing process and accelerated our time-to-market for many products.”

These significant operational efficiencies led to high-level acknowledgement from the wider Schneider Electric business. As part of the Smart Factory program, the plant in Puente la Reina won the internal European-wide Schneider Electric competition for the large quantities of 3D printed manufacturing tools produced, the outstanding time and cost savings achieved, and its contribution to accelerating the plant’s Industry 4.0 transformation.

The team plans to continue leveraging their Stratasys F170 to further optimize the tooling process, but is also exploring other high-performance FDM materials for end use parts. Otamendi sees increasing applications for the technology, and believes it will play an important role in the plant’s digital transformation goals.