Learn how Form Automation can have a new end-of-arm robot tool produced within just a few hours with a Stratasys F370 3D printer.

Form Automation Ltd, established in 2001 and based in the UK, specializes in robotics. Its mainstay, pick and place machines, are essential for the food packaging industry and are used worldwide, from the UK to Australia. Its robots need to run 24/7, which means that any unforeseen machine issues can be costly.

For end-of-arm tooling, replacement in the event of breakage is both laborious and time consuming and can result in unwanted production line downtime. In search of a solution, the company turned to Stratasys 3D Printers. Initially focused on prototyping work to improve the designs, Form Automation was so impressed with the speed and strength of the 3D printed prototypes, it decided to invest in its own in-house 3D printing capability to make production line tooling. Now, the team relies on the Stratasys F370™ 3D printer to quickly and cost-effectively produce replacement end-of-arm tools for its network of robots.

It is essential for these robots to run efficiently and continuously, which means that if any end-of-arm tools become damaged, the team would face setbacks that could take hours to resolve. Traditionally, the tools are produced in aluminum, with part production outsourced to an external company. “The end-of-arm robot tools are complex, and if any part of the stem gets bent, the whole tool is out of action,” explained Martin Grisdale, Company Director, Form Automation Ltd. “Replacing an aluminum part would have incurred significant delays to the production line. Thankfully, with the F370, I can now have a new tool within just a few hours. Coupled with that, the cost to produce 3D printed end-of-arm tools is less than that of producing the same parts in aluminum.”

Produced using Stratasys’ flexible TPU elastomer, the 3D printed stem is more than 50% lighter than a conventionally-produced aluminum part — resulting in better machine performance. “As the 3D printed version of this tool is much lighter, only one engineer is required to refit the replacement tool to the machine,” Grisdale said. “The reduced weight also improves the efficiency of our robots, which can now run at much faster speeds thanks to the lighter tools.” 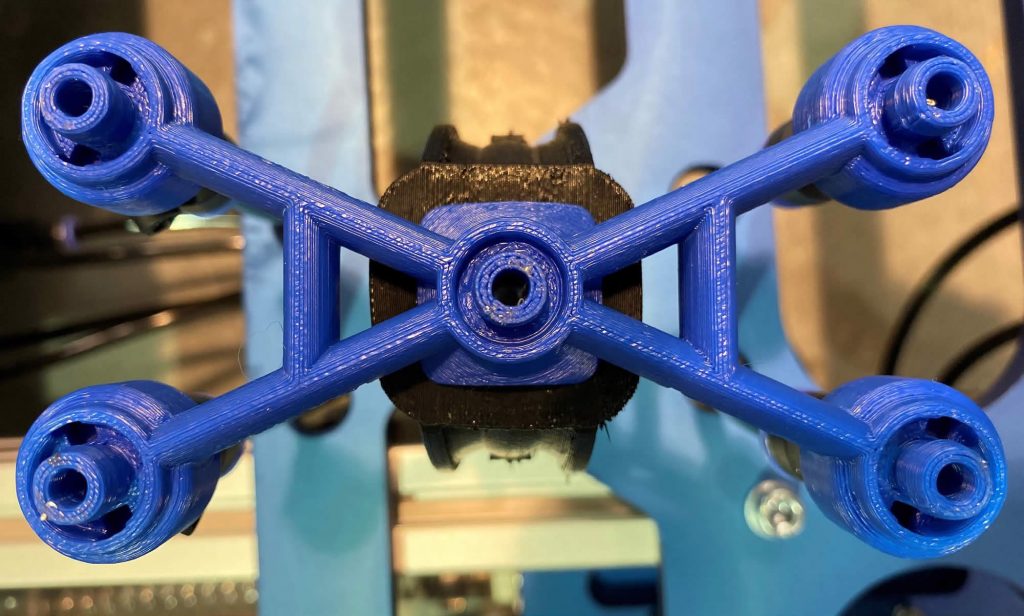 The company has also seen a reduction in the frequency of damage to the end of arm tools, the stems of which would previously bend or snap easily. Thanks to the resilience and flexibility of the TPU material, this is now a much less frequent occurrence.

For Form Automation, one of the biggest challenges in manufacturing its end-of-arm robot tools was the sheer number of parts that comprised each one. When produced traditionally, the tool was made from 20 individual, intricate and often hard to assemble pieces.

Form Automation began to rethink the design of these parts. The freedom afforded by additive manufacturing enabled the team to overhaul the design completely. Using GrabCAD Print™ software, a more simplified design saw the 20 individual pieces reduced to only two — a dramatic reduction of 90%. A 24/7 robot needs a 24/7 technology and having the F370 in-house means that the team can complete the job, even when they’re not on site.