Powersports Athlete Amputee Designs Prosthetic to Stay in the Game

After surviving a snowmobile crash, powersports athlete Mike Schultz’s left leg was amputated three inches above the knee. What would have been a career-ending accident for most people was an opportunity for the founder of BioDapt.

Watch the video and learn more about BioDapt’s humble beginnings and Schultz’s passion to encourage and enable other amputees to stay active and engaged in life.

A Different Kind of Injury

In 2008, Schultz had just signed with a new racing team. On the second round of the International Series of Champions (ISOC) Snocross Championship, he got a horrible start and decided to push hard to make up lost time. While racing down rough terrain Schultz hit a dip on the track and was catapulted from his snowmobile.

He landed with all his weight on his left leg, which was fully extended on impact. The extreme force caused his leg to crumple. “My foot ended up on top of my chest in the wrong direction,” recounts Schultz. “I [literally] kicked myself in the chin with my toe.”

Schultz had broken many bones in his racing career, but this injury was a far cry from a simple bone fracture.

To survive the crash, his left leg had to be amputated about three inches above the knee.

“Having the ability to communicate with these files back and forth while traveling is really key to keeping the design process moving forward all the time.”

Schultz’s dad said that one of the first things his son said after waking up from the surgery was, “Get on with life.” In the spring of 2009, Schultz got up on his first prosthetic leg. A few months later, he realized he needed something better: a prosthetic that would enable him to get back into powersports. Schultz was convinced he could design one himself.

As a powersports athlete, Schultz knew how his body needed to function to be successful on the racetrack. He also understood suspension and the various mechanical components of his racing machines. Now his task was applying that understanding to building a new leg. 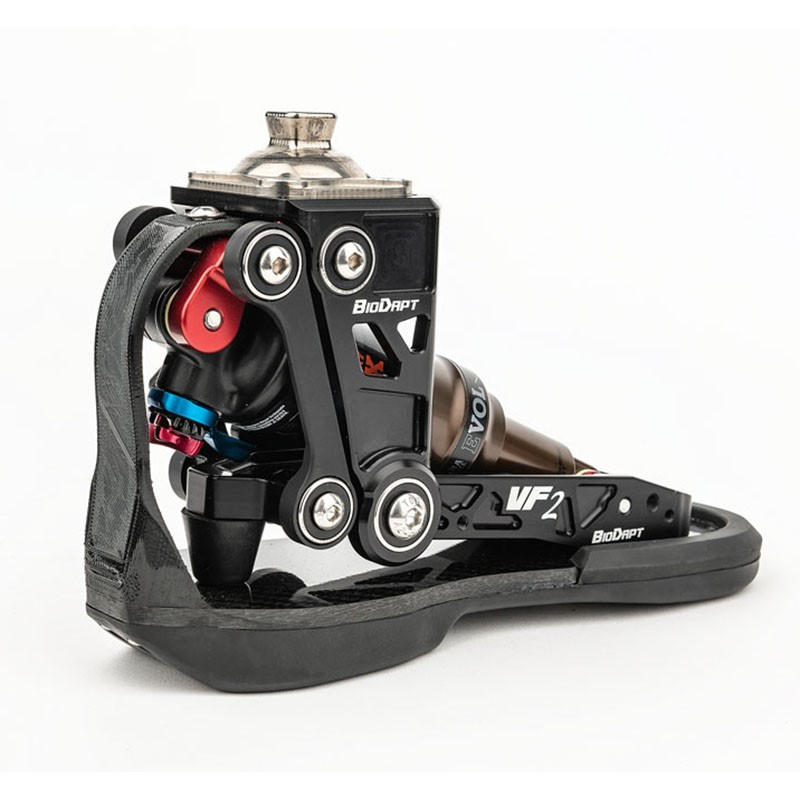 With a natural interest in how things work, his training from a ninth-grade drafting class, and lots of paper (and even more erasers), Schultz designed a new leg that would enable him to continue doing the things he loved. After six weeks of drawing and redrawing a solution, Schultz knew his invention would soon get him back into powersports.

Seven months after his injury, Schultz competed in the Summer XGames supercross event and won a silver medal—on the leg he designed in his garage.

Who Else Needs Help?

That’s when Schultz began to fully grasp that his prosthetic device could help more people than just himself.

Schultz knew there were a lot of amputees that wanted to snowboard or do other activities. And he also had a special passion for helping veterans. Schultz started thinking about how he could make the equipment more versatile. In early 2010 he started a company called BioDapt with the goal of creating the highest performance lower-limb prosthetic equipment for action and powersport activities on the market.

Opening Doors for Others

Schultz’s wife Sara has witnessed many new customers putting on a BioDapt prosthetic for the first time: “You see them light up because now they have the opportunity to do what they love to do.” People tell Schultz, “you have changed my life.”

At the 2018 Paralympic games in snowboarding, nine athletes got on the podium with a total of eleven medals—all were wearing BioDapt equipment.

“That was a really proud moment for me and the rest of my company,” says Schultz. “Winning [a medal myself] is pretty awesome, but when you can have a positive effect on a lot of other people—that is priceless.”

Schultz continues to build versatility into his prosthetics because he wants them to enable wearers to engage in as many sports and activities as possible. Today, the Moto Knee can be used for snowboarding, skiing, cycling, off-road motorcycling, ATV, weight training, horseback riding, and water sports. And the list continues to grow as BioDapt forges onward in research and development to help as many people as possible.

Discover the Latest Features and New Enhancements in SOLIDWORKS 2021

New capabilities and enhancements to the SOLIDWORKS® portfolio of solutions will help you maximize the productivity of your design and manufacturing resources, while empowering you to deliver innovative products faster.