Brothers Jesse, Luke, and Mason Hambly were college students when they had the idea for a healthy thirst quencher that presses fruit juice directly into water. The trio of brothers, who deferred college a couple years to try to make it on the professional snowboarding circuit, noticed that their college classmates were infusing water using the same inefficient method of submerging fruit in infuser bottles. After testing infuser bottles, the brothers noted that while they helped them to drink more water, the infused water lacked flavor. In fact, they learned that instead of releasing fruit juice into the water, infuser bottles did the exact opposite: The fruit absorbed water, bloated, and created a mess that had to be cleaned out later, without ever releasing the flavorful juice inside.

That experience led to the idea for a water bottle with a twist dial on top, which operates a press inside. By turning the dial on top, users press the juice from fruit and its flavor directly into the water. Luke, who was studying design engineering at Conestoga College, took on the concept of pressed water as his senior design project, and the Pressa Bottle was born.
“While I was an engineering student at Conestoga College, I learned how to use SOLIDWORKS® 3D design software,” Luke recalls. “I found SOLIDWORKS to be very user-friendly—with lots of YouTube lessons and tutorials available online—and I was passionate about learning how to use it well. At the same time, my brothers and I were kicking around the idea for pressed water, so I created the initial concept for the Pressa Bottle as my senior design project. Once the design was complete, I purchased a 3D printer because I knew I had to make it.”

Luke Hambly’s initial design for the Pressa Bottle—created with SOLIDWORKS Education Edition software—was so innovative and carried so much commercial potential that upon graduation, he enlisted the help of his brothers. Jesse manages marketing and ecommerce, and Mason is a filmmaker who creates video content for the company. The brothers then set out to transform a college design project into an innovative product supporting a viable manufacturing business, with SOLIDWORKS for Entrepreneurs software as their product development solution.

With a workable product idea, the Hambly brothers were shrewd enough to recognize that other companies might try to steal or copy their pressed-water bottle idea. So their first order of business was applying for a patent on the Pressa Bottle to protect their intellectual property (IP).

“Although I designed the Pressa Bottle for a college course, I and my brothers owned the IP and immediately filed for the patent, which we have since received,” Luke recalls. “We had a viable product design, an excellent tool in SOLIDWORKS for refining the design prior to production, and agreement that it was time to take a risk. The next step was finding a way to make it into a business.” 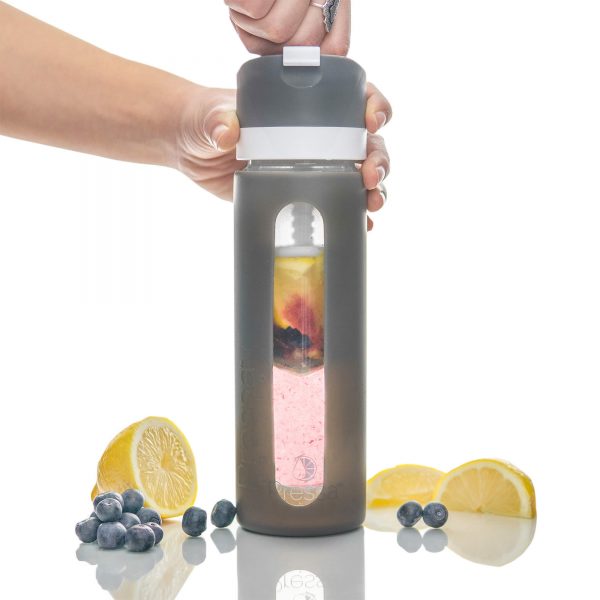 Beginning with SOLIDWORKS Education Edition software and continuing with SOLIDWORKS for Entrepreneurs software, Pressa relied on SOLIDWORKS to design and optimize the Pressa Bottle design, secure initial funding and garner an international patent, and refine product aesthetics and improve manufacturability.

From Kickstarter to “Dragon’s Den”

To acquire funding, the three brothers put together a Kickstarter video using 3D-printed prototypes, with filmmaker Mason taking the lead. “We had to confirm that it wasn’t just friends and family that thought this was a potentially lucrative product idea,” Luke explains. “The Kickstarter campaign resulted in $40,000 in funding as pre-orders in 2015 and allowed us to begin working with a moldmaker to create prototype molds and begin optimizing the design in SOLIDWORKS for production.”

After shipping the Kickstarter pre-orders, the three brothers visited the “Dragon’s Den”, the Canadian version of the American television show “Shark Tank”, to see if they could raise additional funding from the panel of six venture capitalists. While four of the “dragons” made offers, the brothers accepted Jim Treliving’s offer of $150,000 for 25 percent of the company, with the remaining 75 percent split evenly among the brothers.

Ramping Up Production and Sales

With the “Dragon’s Den” funding, the Hambly brothers set out expanding their product offering from one Pressa Bottle model (plastic) to three (glass, metal, and plastic); working with their moldmaker to improve the Pressa Bottle design; and ramping up their production and sales efforts. “SOLIDWORKS enabled us to communicate effectively with our moldmaker to tweak the design and make adjustments in real time, such as doing a better job hiding parting lines,” Luke notes.

The company has continued to grow since the “Dragon’s Den” funding, with a steady increase in sales. “We’ve seen sales growth month over month with sales projected to top 200,000 bottles in 2019,” Luke says. “With the success that we’ve had with the Pressa Bottle and SOLIDWORKS for Entrepreneurs product development tools, we’re excited to develop additional future products.”

Transform an innovative pressed-fruit water bottle design that was created for a college design project into a viable manufacturing company.

“SOLIDWORKS enabled us to communicate effectively with our moldmaker to tweak the design and make adjustments in real time, such as doing a better job hiding parting lines.”