Based in France, Balea is one of Europe’s only manufacturers of weight control systems for the supply chain industry. The family-owned business produces systems for pallets, trolleys and boxes that help companies correctly weigh and load the right amount of goods when preparing orders.

Over the years, the company had maintained its market leadership by continually innovating and optimizing new and existing product solutions. However, when it came time to prototype parts for new products, the services of third-party injection molding companies were often enlisted. This made the process more costly and time consuming, taking upwards of several months for manufacturing and delivery.

According to Max Mestre, R&D Office Manager at Balea, “Not only would we have to wait as long as between three to six months from start to finish, subcontracting parts through a third-party supplier would have typically cost us 20,000 euros per prototype. On top of that, we were constrained in that any design changes would necessitate an entirely new mold and would have cost us another 20,000 euros — effectively eliminating that as an option.”

Because of these factors, prototypes were infrequently commissioned, forcing the design and manufacturing team to make do with 2D designs — which was less than ideal. So with an aim to take control of the process and create more design flexibility, they began the search for technologies that could address their prototyping needs. 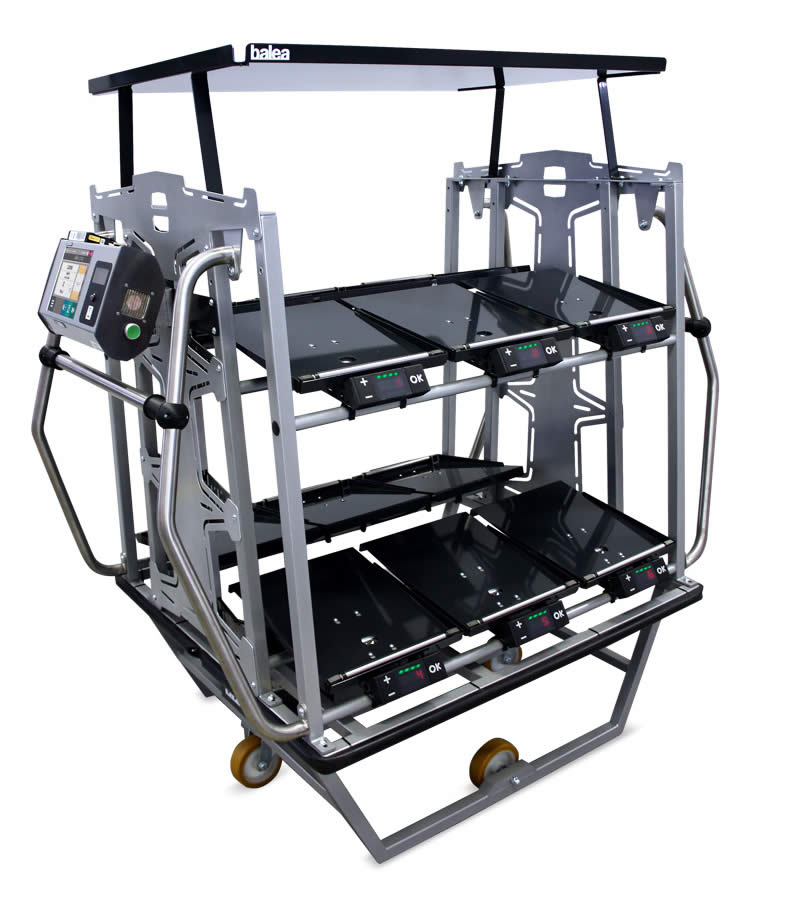 Balea trolley equipped with electronic weighing systems to load the right amount of goods during preparation of orders.

Balea ultimately selected Stratasys® as its technology partner after coming away impressed by the easy-to-use interface and quick turnaround of the F170™ 3D printer and its GrabCAD Print™ software.

“Having seen demonstrations with the GrabCAD Print software and the production of 3D printed parts, we realized that integrating it at our facility would save us a huge amount of time and put us firmly in the driving seat,” says Mestre. “Not only that, but its compact size would enable us to operate it directly from our office space instead of the workshop.”

Since its installation, the F170 3D printer has allowed Balea to redefine the way its parts are designed and accelerate the workflow towards the final end-use product. “Having the 3D printer on site, just next to our desks, makes it fast and simple to produce a functional prototype. Within a day we have fully 3D printed parts,” says Mestre.

Using its F170 3D printer, the Balea team predominantly produces parts using Stratasys’ production-grade ASA thermoplastic. The material’s resilience allows for functional tests to be performed and its non-conductive properties make it fully compatible with the electronic devices they produce.

Among the parts created are outer cases that house the electronic weighing devices. Prior to having the on-site Stratasys 3D printer, prototyping these outer housings would have required injection molding via an external provider before fi nal part manufacture in cast iron or aluminum.

Additionally, the ASA material provides a surface finish that meets Belea’s high standards — so much so that the team even used it to manufacture a model to exhibit at an industry event. Now with more design freedom, quicker turnaround times and the ability to iterate customized solutions for clients at a lower cost, the integration of 3D printing has completely transformed Belea’s way of doing business.

The three printers in the series include, the Stratasys F170™, F270™ and Stratasys F370™, and support a broad range of capabilities and budgets for every stage of prototyping.

New and improved features save time and material. Incredible ease of use with both the hardware and the software means you don’t need special 3D printing expertise.

"This technology has transformed our prototyping process and delivered efficiencies that we could previously only dream about.”