Have you ever tried imposing symmetry for shell elements in SOLIDWORKS Simulation 2012 or older? If you have then you would probably know it is a very tedious process and requires exact knowledge of what the symmetry condition actually does to impose it for shells. The built-in symmetry condition does not work because it requires the symmetry to be applied on a face (which is also the cutting plane), whereas the shells are cut along an edge and not a face. The actual process of imposing this boundary condition was actually published in a previous blog post, “Use of Symmetry in Shell Elements“.

If you tried imposing symmetry boundary condition in SOLIDWORKS 2013, pay close attention to the icon for symmetry plane selection. Did you notice any different between SOLIDWORKS Simulation 2013 and 2012? 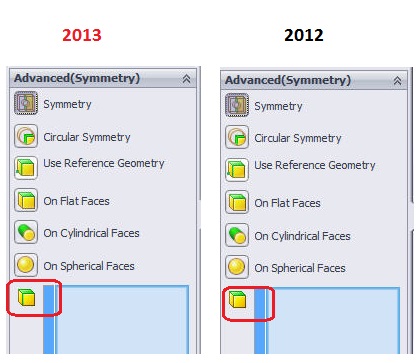 That’s right, you are actually allowed to pick edges when making a selection for the symmetry. What this means is that you don’t need any special techniques to apply symmetry for shell elements. The current limitation of using edges is that the edges have to be planar edges and the plane they lie in is the plane of symmetry. If the edge is a straight line, then the symmetry is applied in a way such that the symmetric surface is actually tangent to the existing surface on the edge selected for symmetry.

Watch this video to see this feature in action.