In this tech tip learn how to reduce the file size of an imported electrical component in SOLIDWORKS using three simple steps.

Let’s face one simple fact: it’s a 3D world we live in. Even electrical design, done mostly in 2D design packages such as SOLIDWORKS Electrical Schematic is not 100% excused from this reality. A symbol may be small and concise on paper, but significant when bolted to a frame. A wire drawn mere inches on a print can be many meters when actually strung out in an assembly.

Capturing an electrical design requires additional tools such as SOLIDWORKS Electrical 3D, and to really get the most out of the software you need accurate 3D models for all electrical components. Invariably, these models come directly from the manufacturer, but with a catch, they are almost definitely a neutral file format like IGES, STEP, or Parasolid.

This can present some problems, specifically with regards to file size. Directly imported model files can really weigh down your assemblies. Let me give you an example: just the other day I was browsing a parts catalog for a CompactLogix PLC controller. I found what I needed and downloaded the model. This is what I got: 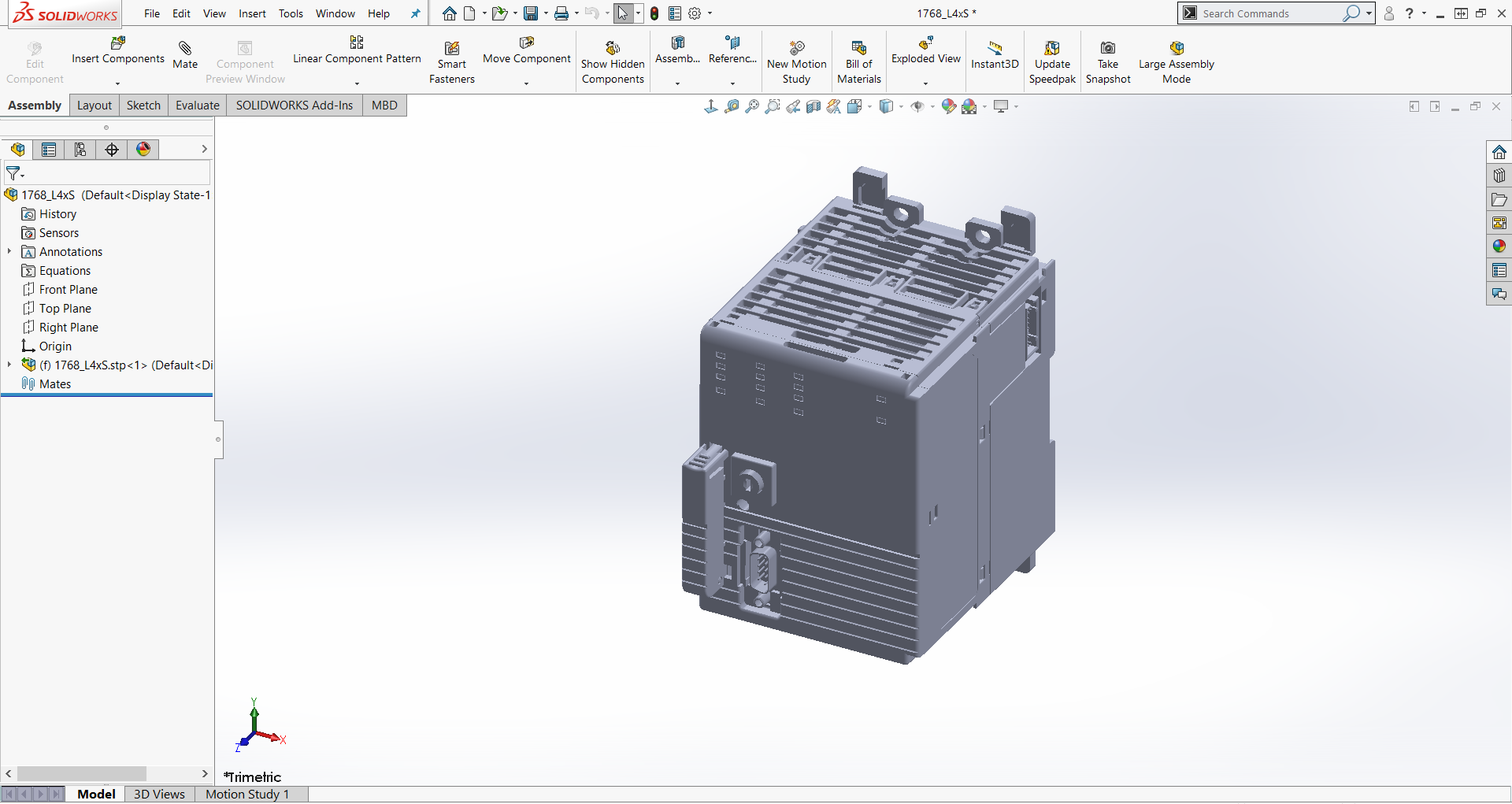 28 THOUSAND kilobytes!? That’s almost 30 MB! For one tiny PLC!? That’s insane considering I only need it for determining wiring and space requirements. Something had to be done to reduce the file size and that something is what I wanted to share with you today.

Here are three steps to reduce file size of an imported model in SOLIDWORKS:

Depending on the manufacturer, many times the neutral file they provide contains not just a part file, but an entire assembly. But we’re not assembling this thing, hopefully we’re purchasing it. One part number, one file I always say! So the first step is to simplify our assembly by saving it as a part file:

With the imported assembly open, browse to File > Save As and change the “Save as Type” field to “Part (*.prt, *.sldprt).” Make sure that for “Geometry to Save” you select either “Exterior components” or “All components,” unless you love surface bodies!

Wow, that file size is pretty good actually. I should have called this “One weird trick to cut unwanted file size.” But can we go even further?

STEP 2: Combine All the Bodies

This part file is an improvement, but it contains a lot of discrete bodies. These can still have a significant impact on the performance of our SOLIDWORKS assemblies. To simplify it further, we can use the Combine feature to add all the solids together to form a single body! That should do the trick, right? 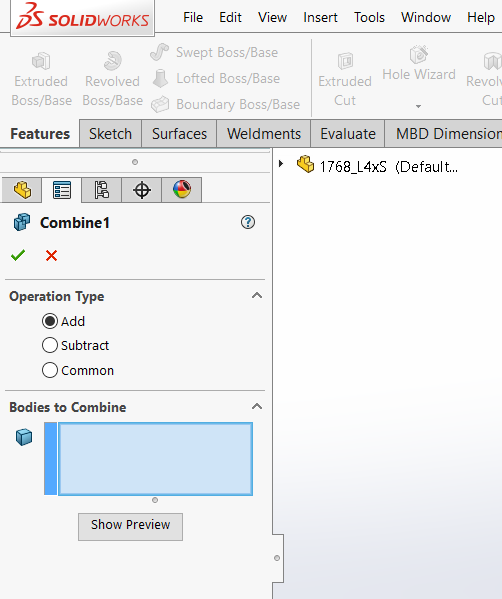 Wait, wait, wait, hold up – 15 MB!? We wanted to go down, not up! What gives? Well, as it turns out, although we simplified the model by combining the bodies, we made the file more complex by doing so! The file has to carry around that parametric combine feature in case we want to change it in the future. But what if we don’t want to change it, like, ever…?

Well, this certainly sounds like taking two steps back to keep moving forward, doesn’t it? But there are times when reimporting a file can actually be very useful. When you export a file to a neutral file format, the feature history is stripped away. This reduces the complexity of the file and as a result, the file size decreases. 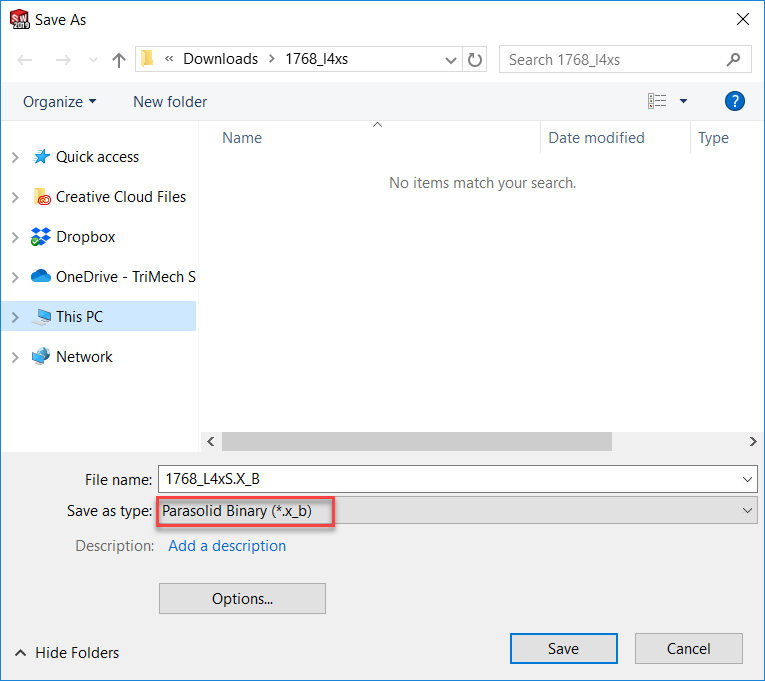 When exporting a file in this way, I’d highly recommend saving the file as a Parasolid file type. Since SOLIDWORKS is built on the Parasolid modeling kernel this reduces the chances of anything coming back broken to almost zero. After exporting the file, reimport it by selecting to File>Open in SOLIDWORKS and browsing to the file. The new part file comes in with only a single, simple body, and the new low file size reflects this. 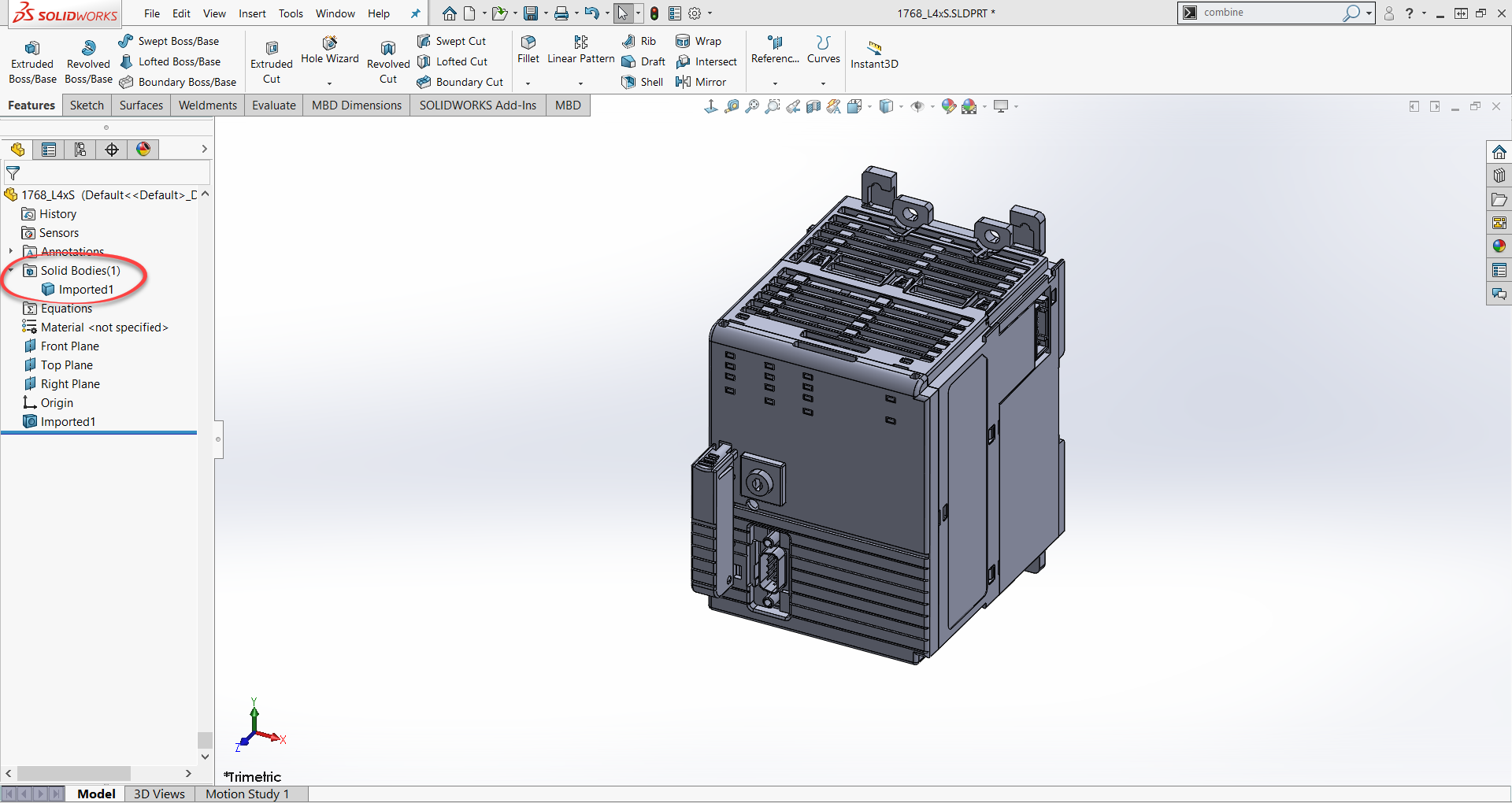 So in just three simple steps, we took a 28 MB file which would have reduced performance in our electrical assemblies and turned it into a svelte 7.5 MB file that is much more easily managed. What a difference!

If we wanted to, we could actually take it even further. Reducing the number of external faces and edges a model has (by filling the hollow interior with a solid and removing text) would decrease the file size even more. However, this would be a much more involved modeling process and the return on your time investment would be minimal.

Try it yourself! Take your downloaded electrical components and run through the same process I’ve just described.

Get more tips and tricks for SOLIDWORKS with a live online training course from Javelin.