SOLIDWORKS Markup is a great way to communicate ideas between teams, allowing users to propose changes without having to edit the geometry of a part. With SOLIDWORKS 2020, there is now a dedicated Command Manager for the Markup features and functionality for users with no touch screen or stylus capabilities.  Let’s take a closer look and see how using Markup in SOLIDWORKS 2020 works with the new features.

In SOLIDWORKS 2020, a dedicated command manager has been added for Markups for easy access. Below we can see that several options have been added to be inclusive to all users, from those using a stylus to a mouse. Let go over the different options available.

The markup tooltip also has some useful features that enable easy collaboration with those who may not have SOLIDWORKS readily available to view any of the comments. The edit, suppress & hide options that are available on all features are available as well as a couple of tools that are specific to Markups.

Markup in the Feature Manager Tree

Each markup is captured as a separate entity in the feature manager tree, as seen in the image below, and is organized in its own folder the same way equations or solid bodies are. Markup features can be edited or deleted by either right-clicking the element on the feature tree or double-clicking the feature in the model space. 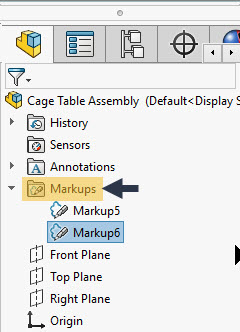 Markup in the 3D Space

An issue that tends to happen when there are several authors making notes on a drawing is the amount of clutter and confusion that can accumulate on the initial model. As mentioned earlier, using options to suppress, naming markup features, and using colors can be used to alleviate this. Still, SOLIDWORKS has integrated markups in a way that keeps them out of the user’s way, as seen in the image below.

The markups are not visible unless the model is set to that specific orientation. As the user rotates the model, a transparent preview of all the Markups appears, as seen on the left side of the image above. A markup will only be fully visible when the model has been rotated into the orientation it was originally created in and will be isolated when the mouse button has been let go as seen on the right side of the image above.

The Markup tool is a great way for teams to communicate effectively with each other. With the addition of mouse functionality, the command manager and model integration, Markups provide a way to document the design process on the fly, while still being unintrusive to those working on the model. If you would like to find out more ways to share SOLIDWORKS files more effectively, please check out the following articles: