Javelin took on the ambitious summer project of designing, simulating performances, and 3D printing a race spec windsurfing hydrofoil. The hydrofoil project idea stemmed from the recent America’s Cup yachting race where the hyper catamarans competing raced on hydrofoils. For those who don’t know what a hydrofoil looks like with respect to windsurfing/sailing check out the video below.

Hydrofoils are essentially airplane wings for under water. When the board/boat hits a critical velocity (speed through the water), the foil acts like a wing and lifts the board/boat entirely out of the water. This is not a new technology, but it has gained a lot of momentum in the last year within the water community. After the America’s Cup regatta proved that foils are not only faster in a straight line but faster around the length of a racecourse the world took notice. Companies began to frantically design hydrofoils that they could release to the market in order to gain a competitive advantage in the early stages of development. The gains companies are sprinting towards: double to triple the speed.

The goal of this project was to analyze, redesign, and 3D print a functioning hydrofoil for a race spec windsurfing board. Only the front wing would be redesigned as an initial project. Further developments could be made on the rear wing, but to keep things on track only the front wing was considered for this project. As Javelin’s team researched the development of a foil it became evident that almost all of Javelin’s products would give the team an upper hand in the development process. As seen in the picture below, the team used the Slingshot hydrofoil as a baseline to compare new designs against. The first segment of the project would involve analytics of the production foil, then further development of a new foil with a combination of CFD (computational flow dynamics) and FEA (finite element analysis) as well as 3D printing the final design. 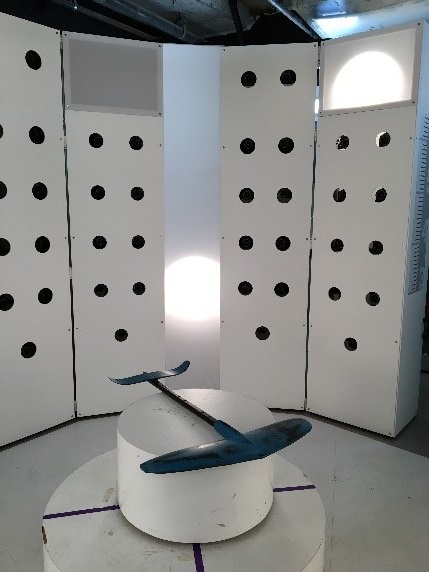 Hydrofoil in TPH’s Selfie Booth ready to be 3D scanned

Over the next few weeks there will be a series of blog entries that will outline our overall process to getting a foil under our feet in the water. First, we needed a baseline. To get our initial data we decided to use the Slingshot foil since I personally have ridden it on a windsurfing board. The foil performs well but it is evident that the foil is designed for all-round conditions and is not tailored to be a high-performance foil. This was a big opportunity for us to design a front wing that would perform better in race conditions.

At this point we wanted to quantify our theories, so we called our customer The Printing House (TPH) who has a room-sized scanning booth. Although the booth is typically used for 3D selfies (which are eerily accurate), we borrowed the booth for 20 minutes and ran a scan on the Slingshot hydrofoil. The scanning took less than 5 minutes and we then had a CAD file that would be imported into SOLIDWORKS within the day. Thank you to the team at TPH for helping us create a high-quality scan!

From our team’s background in aerospace and mechanical engineering it was clear to us that the front foil on the Slingshot foil had a large amount of drag and would create a lot of lift. The next stage of the project was to import the scanned file into SOLIDWORKS to re-format the file in order to manipulate the shapes and sizes of the front wing. We will dive further into the re-designed hydrofoil shapes in a future blog post.

Next, we used SOLIDWORKS Simulation to run flow simulations on the original design. The results were quite surprising on the levels of lift the foil produced. Since the new, 3D printed foil would be mounted to the same assembly as the original, we used the Slingshot foil as the base line for all future designs.

Once the foil had been redesigned with multiple iterations, the team ran another five simulations on the new designs. The goal was to keep the same levels of lift while dramatically reducing the drag forces on the foils. 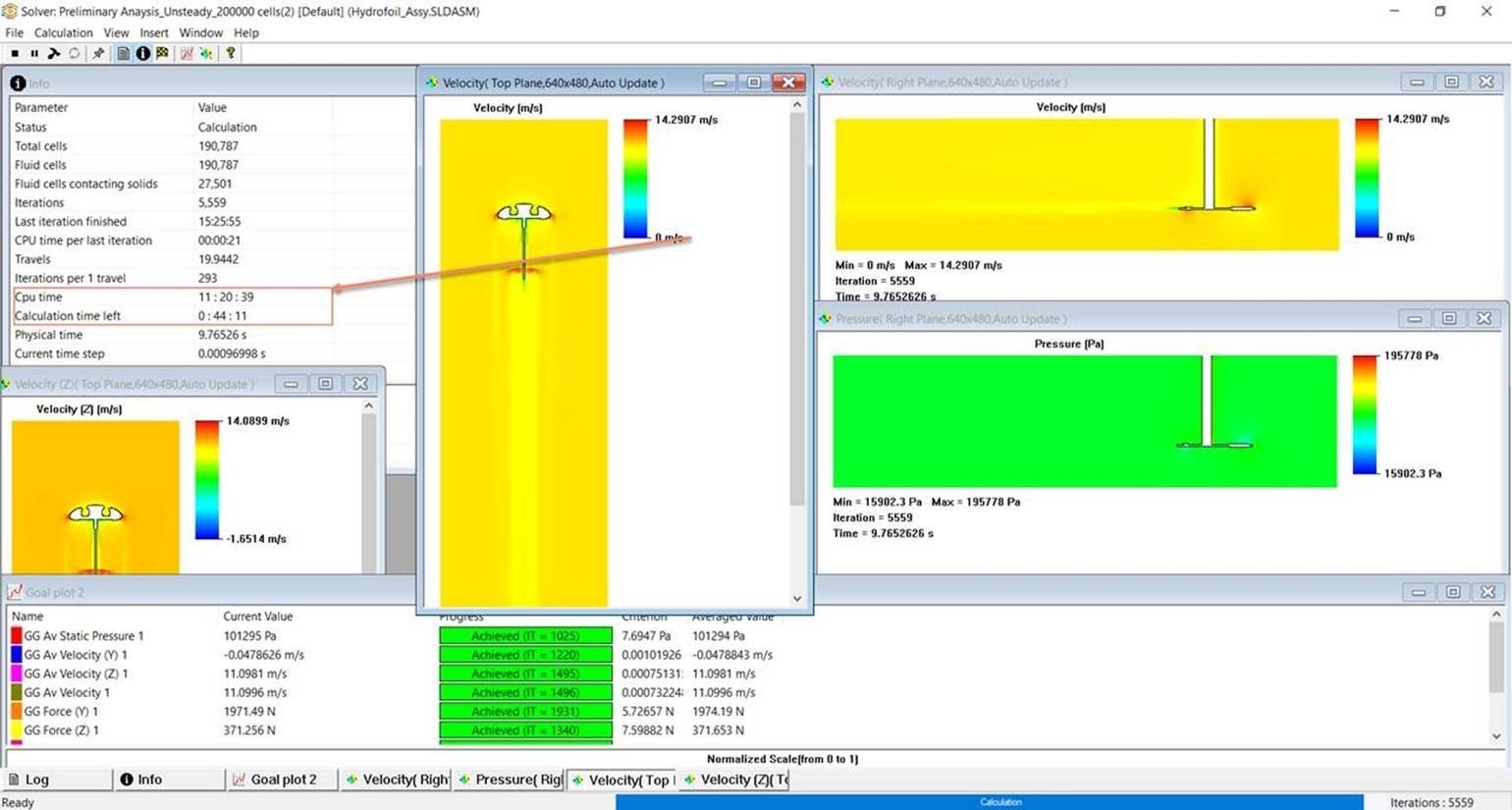 This is where the project gets really fun! The team took the simulation data from SOLIDWORKS and decided on our optimal design. Once the design was chosen it was sent to our Stratasys Fortus 450 3D printer to be built in our polycarbonate material. The foil was 3D printed and released at Javelin’s company-wide Back to School meetings in mid-August. The entire company was extremely enthusiastic with the results. The hydrofoil is currently being tested and refined. We can’t wait to show these exciting results over the coming weeks. Stay tuned for pictures and videos of initial tests and the inaugural windsurfing test! 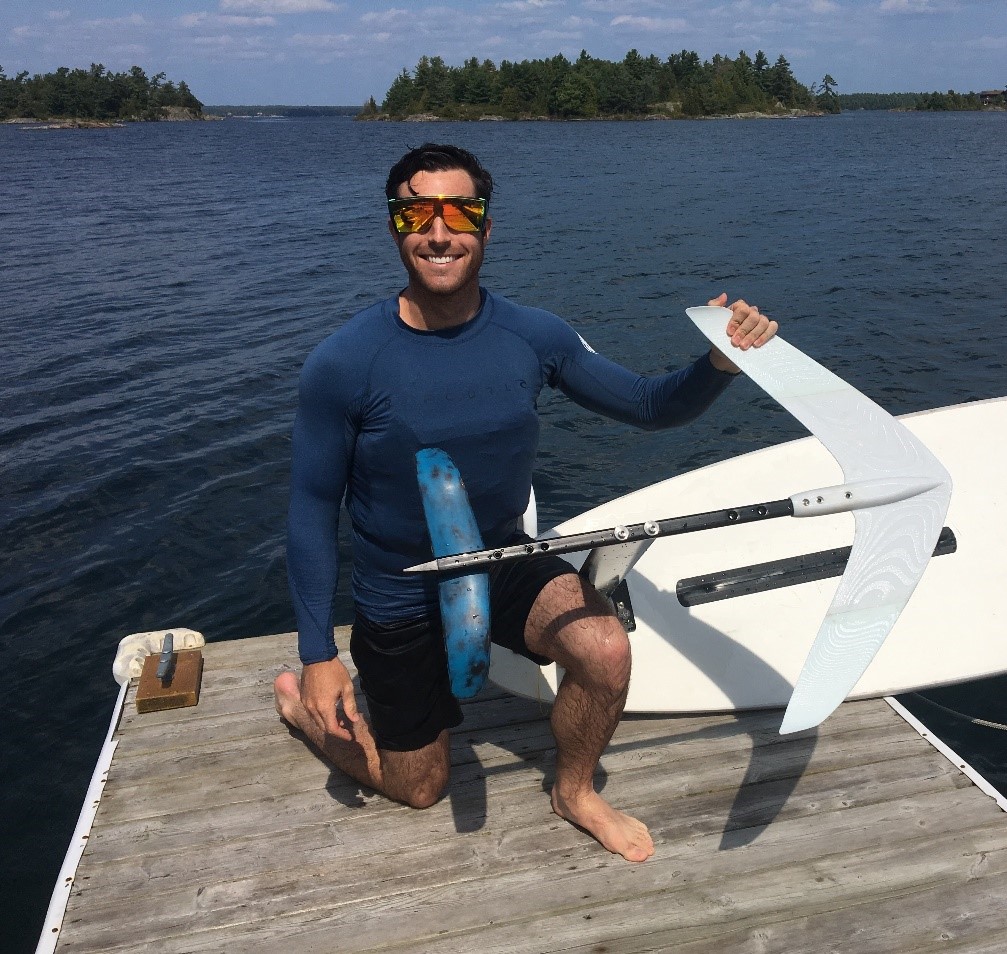