“We should want to own and drive a clean, energy-efficient car,” said Jim Kor, president and senior designer for the Winnipeg based engineering group of KOR EcoLogic. His passion for the environment led him to design the principles of sustainability into a new car code-named Urbee and created with the 3D printing capabilities of Stratasys.

The two-passenger Urbee, which stands for Urban electric with ethanol as backup, was designed to use the least energy possible. It is capable of reaching more than 200 mpg on the highway and 100 mpg in the city. And now, it is the first prototype car ever to have its entire body printed with an additive process.

When KOR leaders decided to create the world’s most fuel-efficient and environmentally friendly vehicle, their goal was “to design a practical, roadworthy car that runs solely on renewable energy, is environmentally responsible and has universal appeal,” Kor said. He hopes it will find a global market some day. Kor wanted to make Urbee aerodynamic and as “green” as possible throughout the design and manufacturing processes.

Initially, Kor and his team made half of a model of the car out of clay at 60 percent scale. By holding a mirror to the half, they could see what a whole model would look like without having to make the entire car. “A clay model has a reality that can’t be denied,” Kor said. “We can add and remove material and live with it on a daily basis. The downside is that it takes up to three months to make.”

Next, the team had the model scanned into a computer to test its aerodynamic properties. They wanted to achieve certain goals or their computer simulations would be off, and the whole car would “unravel,” said Kor. One very important statistic was the coefficient of drag (Cd), which they wanted to be 0.15 or less. By comparison, the Prius is 0.26. The computer model showed the Urbee’s Cd to be 0.149. “This was amazing,” said Kor. “It gave us the confidence to go ahead.”

There was just one little problem. “We had everything in the computer but no way out,” said Kor. He and his team knew traditional manufacturing methods would not provide the results they were looking for, so they explored other options.

One option was building the prototype body panels using fiber-reinforced polymer (FRP) or fiberglass. This would involve building a 1:1 scale plug for each of the body panels, first creating a strong framework of wood or MDF and covering it with dense foam that could be hand-carved into shape. Alternatively, the plug could be carved using a CNC milling machine to produce a more precise surface.

Then a mold would have to be made and layers of fiberglass and resin placed onto the surface until it maintained its shape. Once the part was cured, the component would be separated from the mold. “This is a long, labor-intensive process,” said Blaine McFarlane, one of KOR’s engineers. He estimated building all of the body panels from FRP would have taken 8 to 10 months of steady work for two people. Using CNC machines would have cut the time, but still taken three months. “A fiberglass body would have taken a long time,” agreed Kor. “In addition, we would have had to deal with draft, or the ability of the part to come out of the mold.”

About the same time, one of KOR’s industrial designers, Terry Halajko, sent Jim Kor an e-mail with a link to Stratasys. “Look at the size of the parts they can make!” he wrote. It seemed the team had found its solution. Conversations with Stratasys executives led Kor to believe that all exterior components could be created using Stratasys Design Series Dimension Performance 3D Printers and Fortus 3D Production Series Systems at RedEye on Demand. 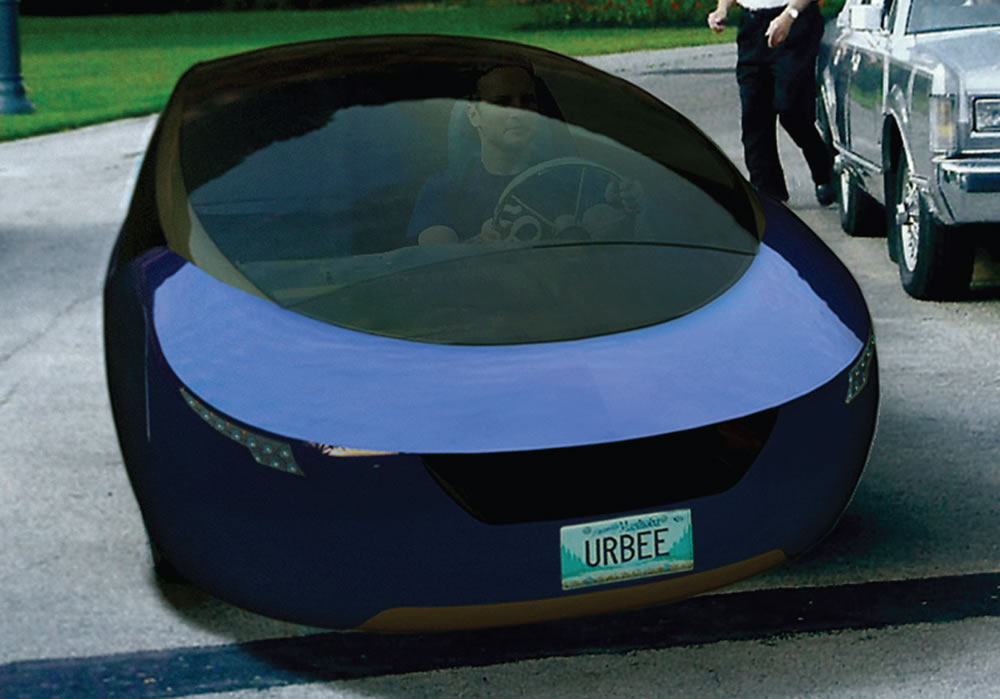 Kor and his colleagues transformed the scanned computer model of the car into 10 logical body panels, first creating a 1/6th scale model to verify the exact fit of all the individual parts.  This gave the team the confidence that the large panels would be trouble-free. Together with Stratasys, the team selected ABS material and began to build the car. Several major body panels were built within weeks of receiving the go-ahead. The full-scale door and side panels were completed first. “These were big panels,” said Kor. “The parts fit together perfectly.” The remaining body panels are currently being built by Stratasys. “Just to make the first car was quite an achievement,” said Kor. “With our second prototype, we will design to the Stratasys printer capabilities. We want to exploit the full capacity of the machines.” That means designing both the inside and outside of the car. It also means putting plastic only where it is needed.

Kor likes to compare the fender of a future Urbee with a bird bone. “If you look at a cross section of a bird bone, you’ll see that there is bone only where the bird needs strength,” he said. “The bone looks like chaotic webbing. FDM is the only process that can replicate a bird bone.” This will be important when building extremely light, yet strong, pieces, such as the Urbee’s fender.

Stratasys can build a fender and place the plastic exactly where it is needed, it is good for the environment, it reduces cost, and it doesn’t sacrifice safety. We simply don’t need to put material where we don’t need it.

Currently, fenders are made to be a constant thickness, but much of the material is unnecessary, according to Kor. It only adds to the car’s inefficiency and environmental waste. “Stratasys can build a fender and place the plastic exactly where it is needed,” he said. “That is just so powerful, it’s unbelievable. It is good for the environment, it reduces cost, and it doesn’t sacrifice safety. We simply don’t need to put material where we don’t need it.” “FDM technology made it easy and efficient to make design changes in the Urbee along the way,” said Kor. “It also helped us meet our environmental goals by eliminating tooling, machining and handwork. If you can get to a pilot run without any tooling, you have advantages.”

To have body parts that take days or weeks to make is pretty fast, other methods are months away

Currently, the Urbee is largely self-funded, but KOR’s team hopes to raise money to build a second prototype. Once the money has been raised, Kor estimates it will take one year to build the next Urbee. Kor marveled at the speed of 3D printing. “To have body parts that take days or weeks to make is pretty fast,” he said. “Other methods are months away.” Kor said he feels a responsibility to initiate positive change by creating a vehicle that uses the least energy possible. “If we have the car model in the computer anyway, then from the designer’s perspective, the 3D printed body is quite effortless,” he said. “One just sends files, waits a bit, and…POOF…there are the body panels. No other process can really compare with that.”