Bell Helicopter manufactures the heavy-lift “tilt-rotor” Osprey, the hybrid aircraft that combines features of both airplane and helicopter to accomplish what none of its forbears can do. It can lift off, hover, and land vertically yet it can cruise at high altitudes at jet speeds.

“We built the conduit for one stabilizer, and the development team installed it on the mock-up. It was successful so they immediately requested a second set for the other stabilizer,” says RP lab technician Mike Storp. After some minor variations the team requested five more complete sets for a total of 42 conduit models. “It took only two and a half days to make them all. The Fortus system ran around the clock.” The development group was pleased because Bell could keep control of the project in-house, but also because they would have had to wait six weeks if the prototypes were made traditionally, of cast aluminum. “We obviously saved money as well,” Storp says. 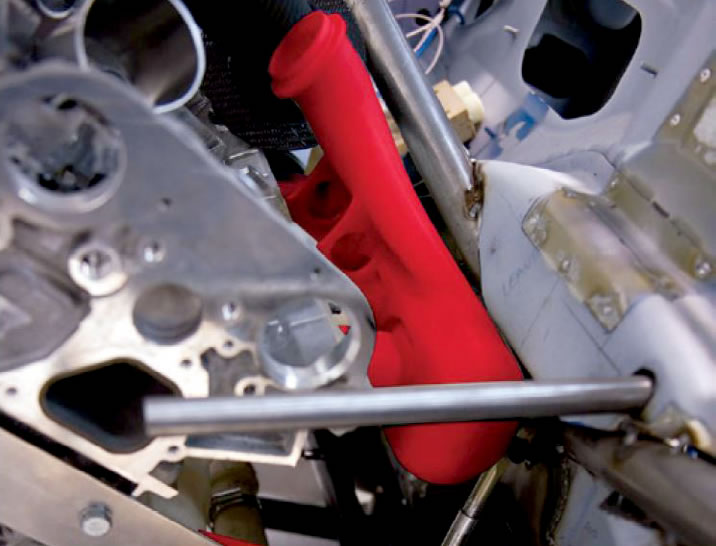 The lab chose the process because it can model with PC (polycarbonate) and PPSF (polyphenylsulfone). These thermoplastics work well for functional testing, which is important for demanding applications, like aerospace. “The traditional epoxy-based RP processes can’t match FDM in this area,” says Storp. PC characteristics include dimensional stability, high heat-distortion temperature, high tensile and flex strength, and a hardness exceeding that of ABS plastic. PPSF characteristics include a VØ Flammability rating, the highest impact strength of any rapid prototyping plastic, very high tensile and flex strength, dimensional stability, and resistance to petroleum products, acids, bases, and chemicals. “You’ll never see an epoxy part on an aircraft for a functional test,” says Storp. “Fuels and hydraulic fluids would actually dissolve it.”

Post-processing is Faster and Cleaner with FDM

“FDM has strong points besides durability, but ease of post-processing is at the top of the list for me,” Storp says. “With some other processes, it’s frustrating what you have to go through. They might require three times longer in post-processing than it took to build the part. FDM is a faster, cleaner process. After removing the support material, there are no post-processing steps. You’re done.

“All processes are easy when it comes to building the part. But with some of them, you really have to stay on top of it after the part is built. They can be very messy and time consuming. That’s a big issue. We don’t have that hassle with FDM.” “It takes a long time to design an aircraft. Starting from scratch it can take five years, and it’s a rigorous development process to go through,” says Storp. “When using FDM over the course of development for a new aircraft, there is great potential to reduce costs and development time.”

Those qualities make fused deposition modeling essential to the lab’s purpose, which is to contribute to aircraft prototype development and support Bell Helicopter’s long-range plan to become the heavy-lift tilt-rotor aircraft leader.

“The efficient process allows us to do more iterations than we could with other processes, that results in better designed components.”

Better-designed components help to build a better end product. And when your product is as sophisticated as the Osprey, that’s an important aim.

How does FDM compare with traditional methods for Bell Helicopter?

Participate in the annual 3D Post-printing Survey by PostProcess

How to manage dimensional tolerances in 3D printing

Procedures for shutting down your 3D printer to avoid costly damage