Traditional small-block V8’s have a certain sonic characteristic to them that sounds guttural and off-balance. The sound is raw and distinct, as the pistons fire at offset intervals, which rattles the block a lot more.

I’ve always wanted a V8 engine, but rather than spending over $7000 for one, I figured I’d 3D print one. The project was exciting, time consuming, but in the end, totally worth it. These next few blogs will be a part-by-part account of the entire project from start to finish. At the end of each part, I’ll include a “Tips n’ Tricks” section where I cover some important bits of information pertaining to the topics discussed in the segment.

I think of myself as “pretty proficient” at 3D modelling and designing. However, I knew that modelling an engine assembly from scratch was going to take an unreasonable amount of time. I searched online and found what could arguably be the best 3D model of an LS3 engine I’ve seen to date. Eric Harrell (AKA “ericthepoolboy“) has working models of a Chevy LS3, a Subaru EJ20, a Ford flat head V8, and a Toyota 22RE 4-cylinder engine. You can find all of his designs on Thingiverse. 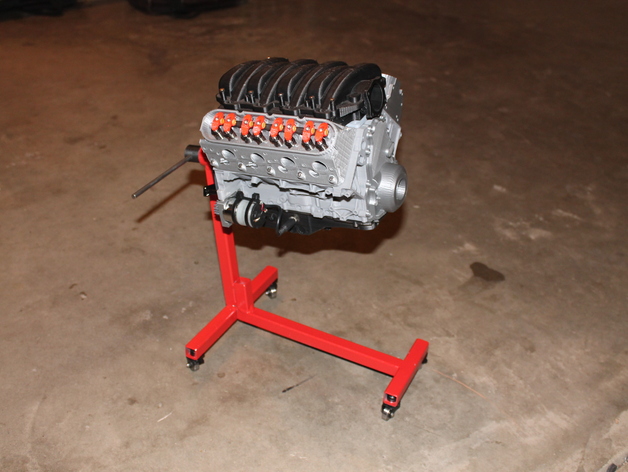 Eric’s design files include the block, cylinders, headers, valve covers, crankshaft and camshaft assemblies, as well as rocker arms and valves. The parts are extremely detailed have been designed for easy fastening, with pre-cut holes and bores for M3-sized screws. The entire engine – once assembled – moves freely, with integrated bearing sockets for the crankshaft and camshaft. A DC motor is attached to a mounting point that connects the motor to the flywheel, meaning the entire thing will run on its own once powered.

Looking at his final design a little closer, I noticed he was powering the DC motor directly from the wall, so the pistons were “firing” at the same speed. I wanted to demonstrate something a little more dynamic, so I planned out a design for a gas pedal (which I will discuss in a later post). The pedal would act as a potentiometer that would regulate the speed of the pistons.

Once the 3D models were all downloaded, it was time to get printing.

Printing all of these parts was a lot of fun. I had three printers at my disposal, the Fortus 450mc, the 250mc, and the Stratasys F170, part of the Stratasys F123 Series. These three printers, though different in both age and capability, extruded the parts in incredible detail with no hiccups or setbacks. I didn’t have a pre-determined plan on which printer would print which parts, so I organised a print schedule based on what colour options I had access to. I had more colour choices for the 250mc (such as orange, yellow, and grey), so I used it a lot more than I did the F170 and 450mc. I tried to stick with a double-density sparse infill for most of the parts, as it was good balance between material efficiency and part strength. This wasn’t the case for all parts, as they varied in size and complexity (I explain a little more about this in the Tips n’ Tricks section at the end).

The pistons, piston rods, and camshaft were the first things that were printed. 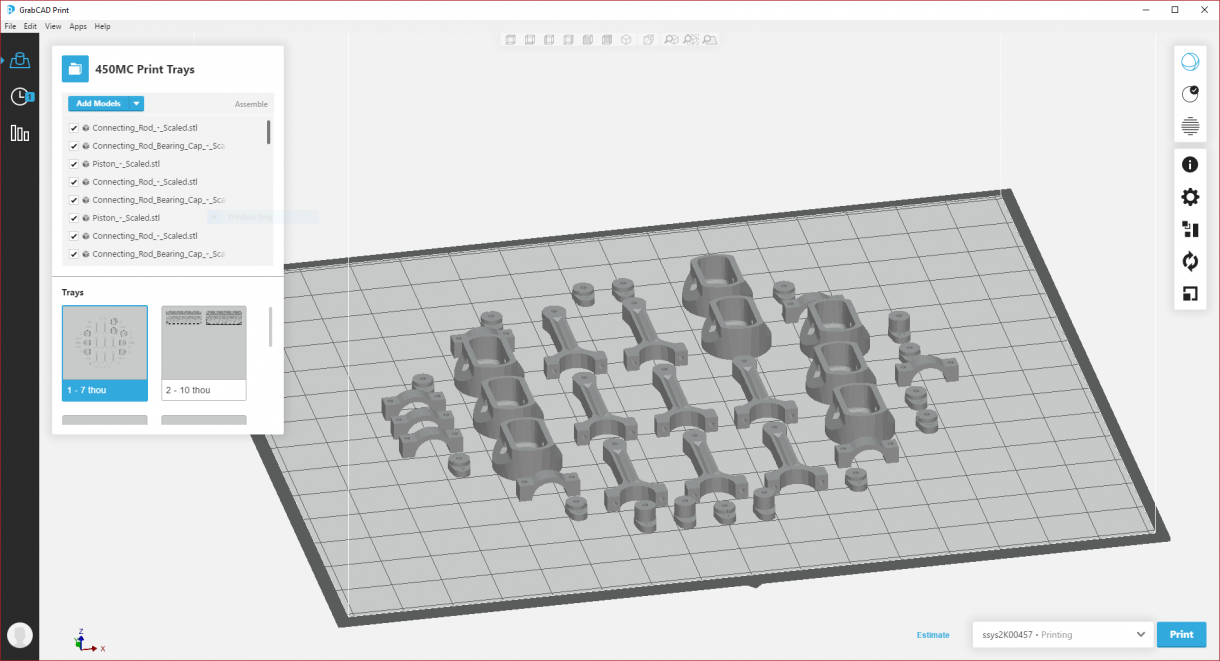 Pistons, piston rods, and camshaft assembly all printed on one build sheet.

Using the “Optimize” feature on the Arrangement tool, the parts were positioned in a way that made it easier for the printer to extrude the material. This optimisation was implemented with every printed cluster of parts. 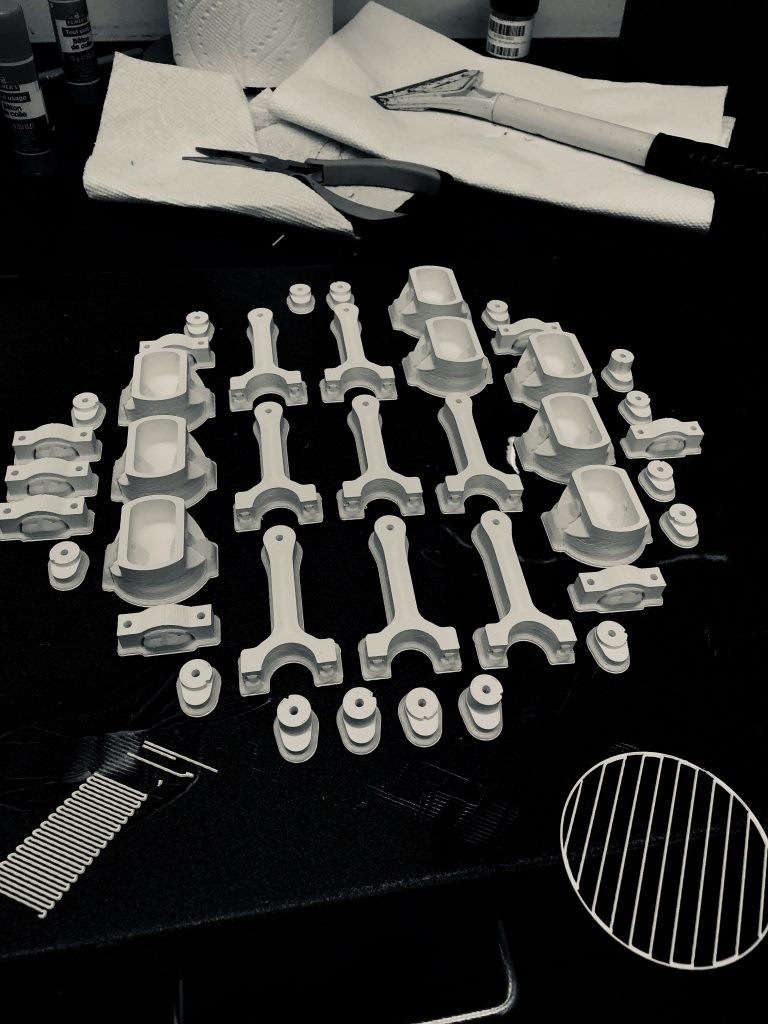 Next was the engine block. This was the longest print out of all of the parts. The block was done on the 250MC and took almost 4 days to finish (not including time for washing and drying). I wanted to print the block in orange (harking back to classic orange Chevy V8 engines), and the only orange material I had was for the 250. 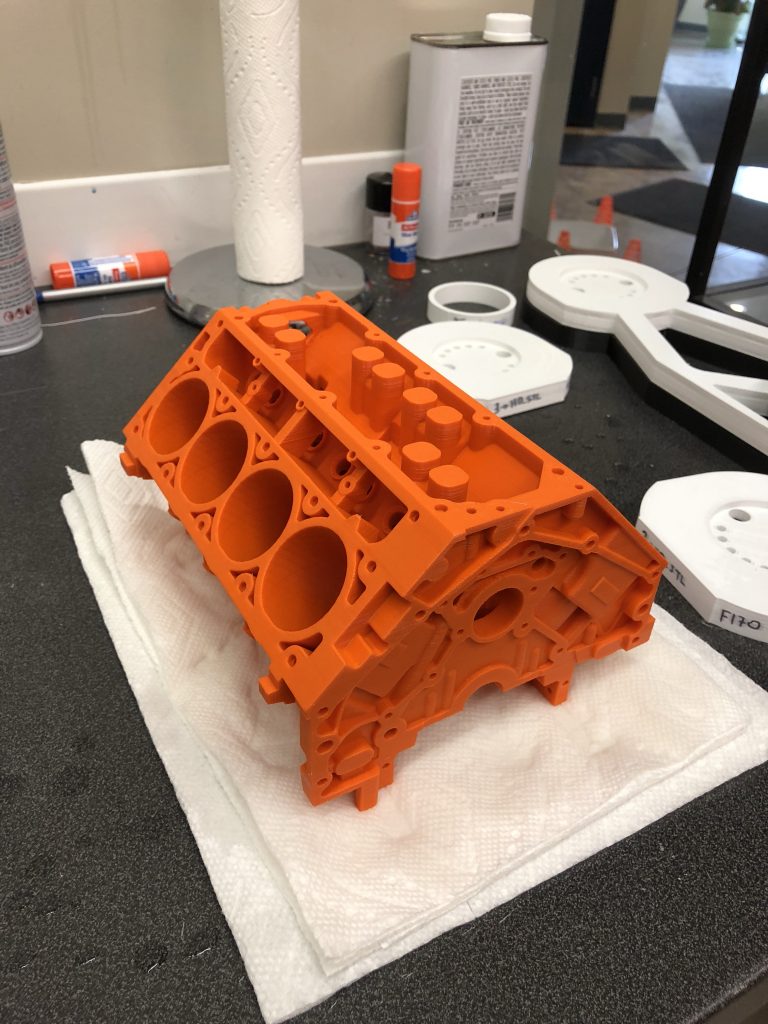 ‏Most of the other large components were printed in black to compliment the orange block. These parts included the headers, intake manifold, cylinder heads, crankshaft, and flywheel. A few bracket parts like the valley plate and covers were printed in grey to accent the black and orange.

Smaller parts, such as the crankshaft assembly seen below, needed to be printed at a lower layer thickness in order to maintain part detail and fastening features. This was especially important for gears, as the gear teeth needed to be detailed enough for them to sink in and align properly. 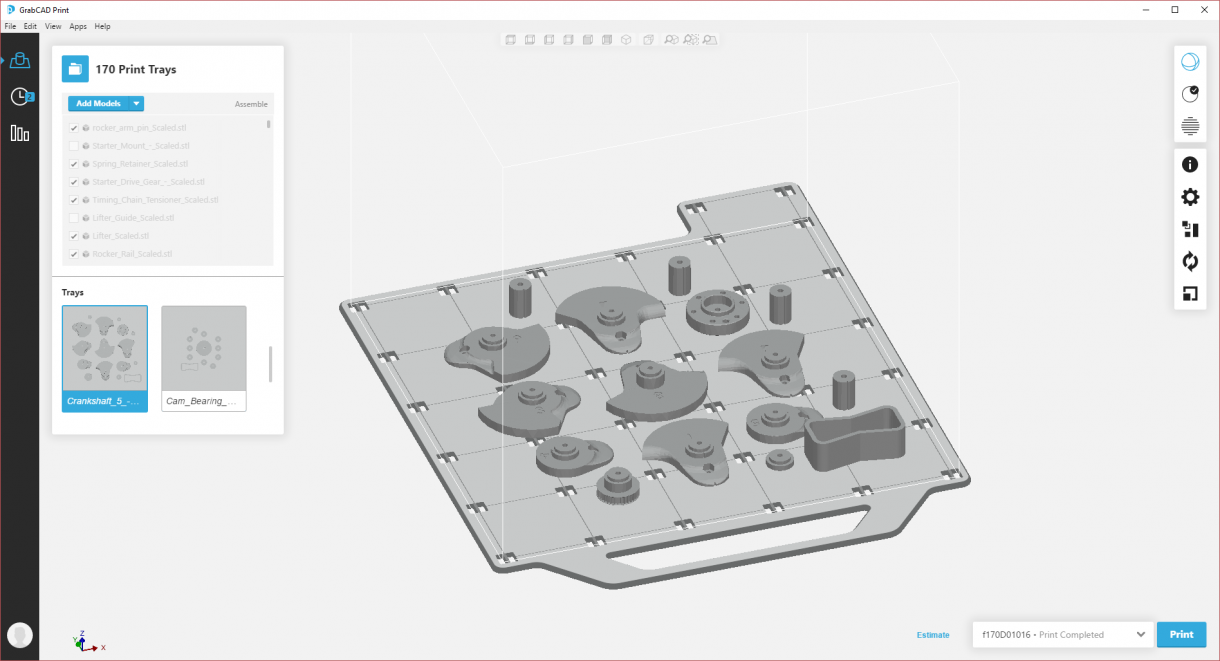 The crankshaft assembly was printed on the F170 at a thickness of .070″.

It’s a good idea to understand the relationship between layer thickness, detail, and overall part strength. There’s a fine balance between these three aspects of a print job that determines how your part will emerge once printed. For big parts such as my engine block, intake manifold, and cylinder heads, using .10″ layers is ideal. The parts come out stronger, but because they don’t have many finite elements, the detail is still high. Smaller parts such as gears, spacers, pins, bumpers, and rails should be printed in .070″ layers to maintain part accuracy and detail. The parts do come out a little weaker, but you can work around that by printing them solid. The only drawback to this is that the print time will be significantly longer.

Choosing the right layer thickness is determined purely on a case-by-case basis, and is still entirely up to you.

This concludes part 1 of my project blog. Subscribe now to receive more parts of my 3D Printing a Small-Block V8 Engine story.