3D printing fully assembled, multi-component parts in a single job allows you to see dynamic components working in their prototyping stages. Rather than 3D printing smaller parts and assembling them together, you can reduce the workload by printing the full part in a single print. Once the supports are washed, you have a seamless, perfectly dynamic and mobile part. 3D Print Moving Components eliminates having to print very small, weak parts that could be damaged (or lost) in, say, a wash tank.

The key to 3D print moving components is to have air gaps in between the components (otherwise known as negative space), and it starts with the initial design.

Let’s use the hinge design below as an example: 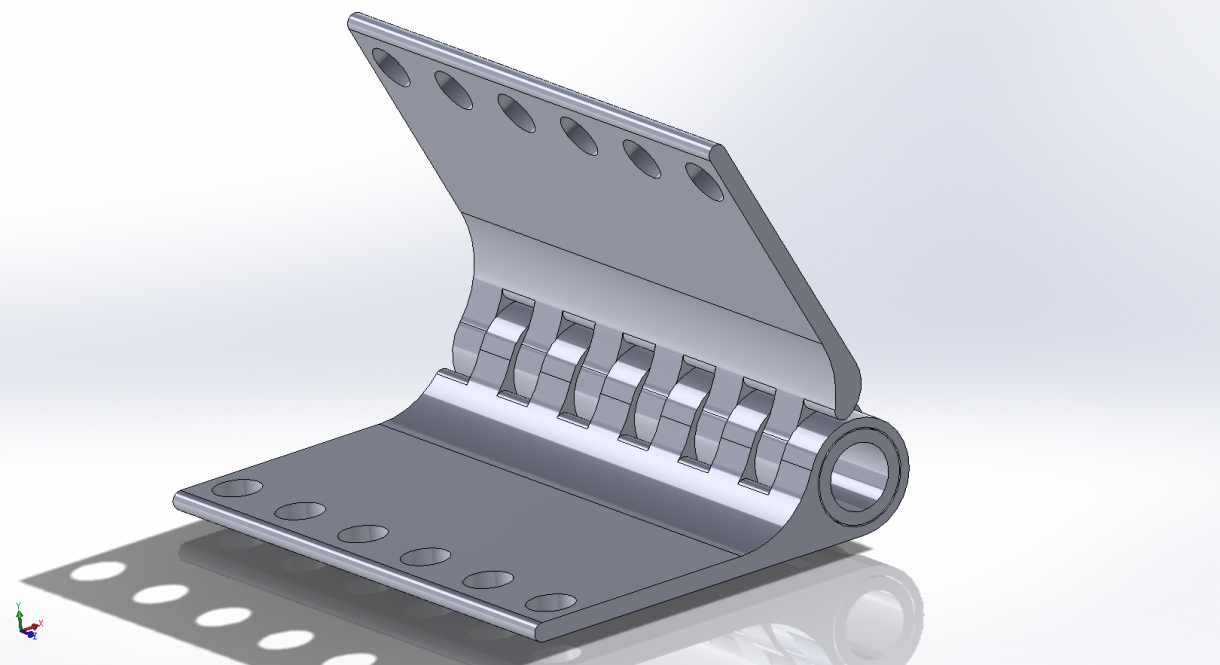 Hinges are usually comprised of the knuckles (the hollow portion of the hinge in which the pin is set), the leaves (the parts of the hinge that extend laterally from the knuckles and come in contact with the external surface), and the pin (the rod that holds the leaves together by being set inside the knuckles), but we’ll design and print the hinge as only two components.

The methods shown for this hinge design can be applied to almost any mobile or dynamic component that you design.

Negative Space Based on Layer Thickness and Part Resolution

I designed this hinge in SOLIDWORKS as one part file, separated into two bodies. Using a series of repeating reference planes, I cut out and extruded the interlocking knuckles, making sure to add an equal amount of negative space between both knuckles. The holes on the ends of the leaves are just placeholders, as the main focus of this project is the pivot mechanism.

Ideally, the air gaps need to be small enough to go unnoticed, yet large enough to fully clear the extrusion paths as the printer lays down layers. This allows the final part to maintain its structural integrity while its components are fully mobile.

Layer thickness doesn’t just represent the height of the layer, it also represents the width of each path.

A design rule that I’ve stuck with is to set the air gaps to at least double the layer thickness of your choice. For instance, if I’m printing the hinge shown above in 0.007″ thickness, I want to make sure my air gaps are at least 0.014″. This way, there’s no chance that the extruded paths will intersect and melt together during the printing process. This same principle applies for all layer heights. Now, we could go into liquid thermoplastic retention properties and argue that the air gaps can change based on what material you use (e.g. Nylon12 instead of ABS-M30), but the safest option that works with almost any material is the one I just described.

Hinge Without the Pin

Now for the design. As stated before, the hinge can be designed with only two moving parts.

Pictured below is the design in question. If you look closely, you can see there’s no pin in the centre of the knuckles. Instead, the knuckles are interlinked with an air gap of 0.3mm (or 0.012″). For the purpose of this blog, I’m printing the hinge in 0.005″ layers, so my air gaps are slightly larger than what they need to be (which is fine). If I made the gaps smaller than 0.010″, there would be a good chance that the paths would melt in on themselves during the printing process, rendering the hinge immobile after cleaning. 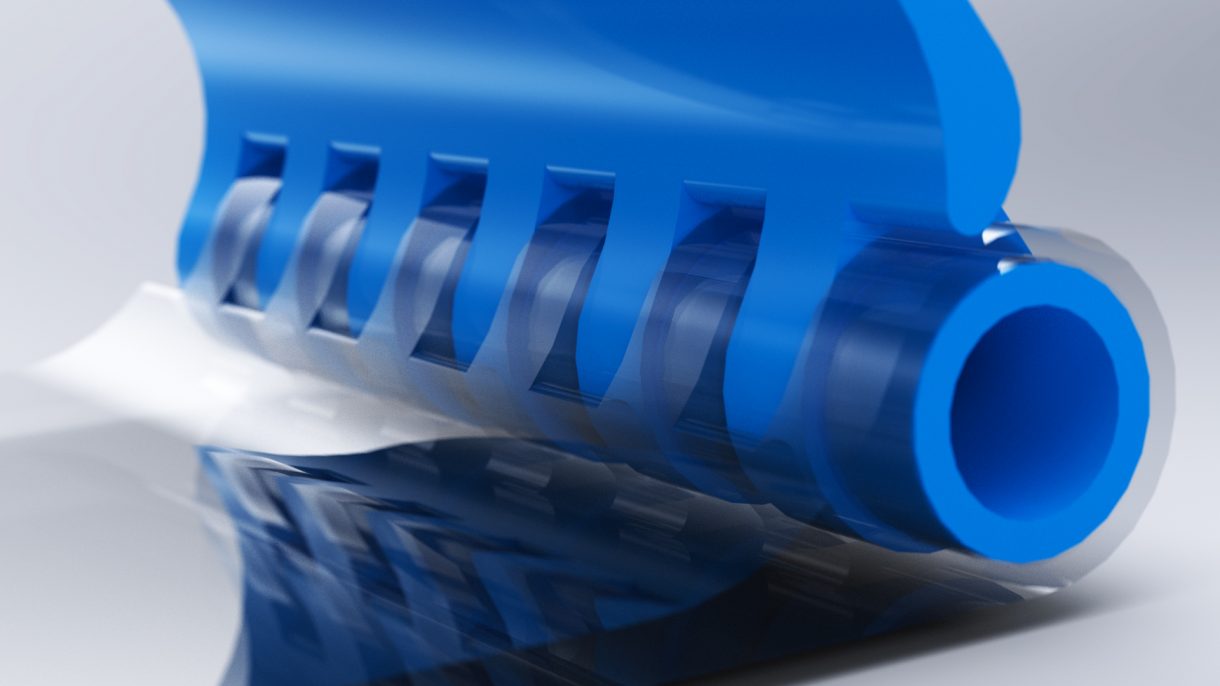 Making one of the leaves transparent allows a clear view at the connecting knuckle, which fills up the gaps. 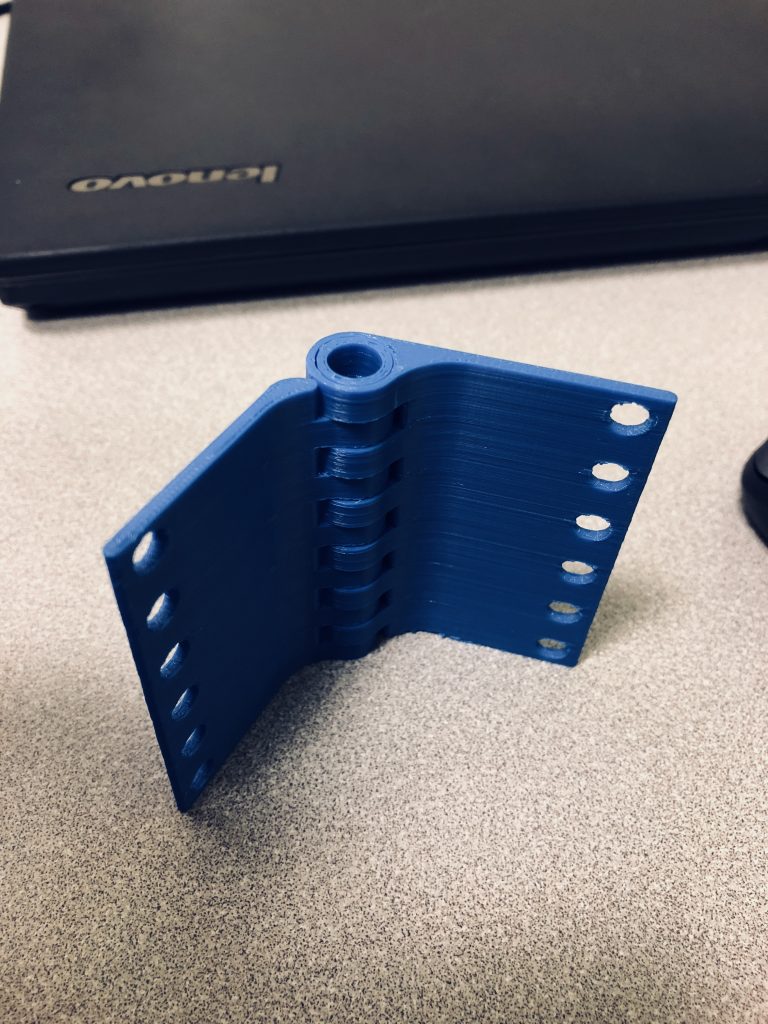 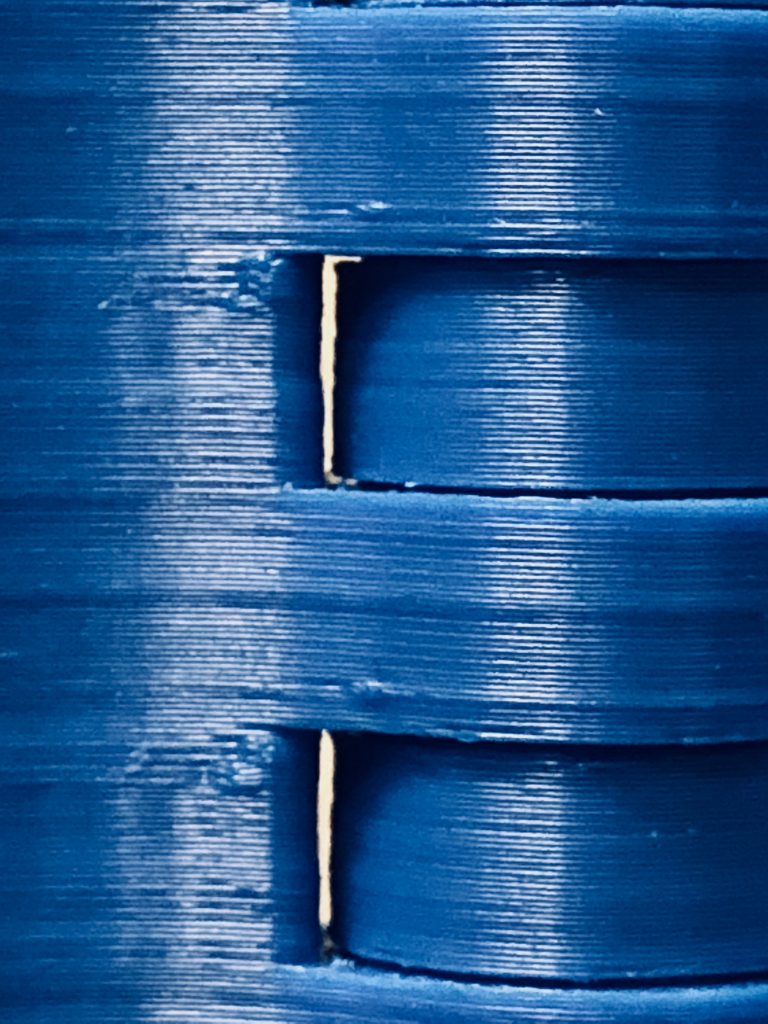 Here you can see the air gaps up close.

One of the major drawbacks of this method of printing/prototyping is that you will need to use more support material for these parts to print properly. During the printing process, the negative space (air gaps) are filled with support material, which is then dissolved in a wash bath.

The model material you are using must be compatible with soluble support material. The supports need to be dissolved in order for your parts to freely move after they’ve been cured.

On the topic of support structures dissolving, the wash bath times do slightly increase for prints like these. It takes a little longer for the solution to reach the inner support material buried within the part. Once the part is fully washed, gently try to move the parts back and fourth to pry them apart. If you apply too much force the parts might snap.

Some Things to Consider

If you’re designing parts to 3D print moving components that are fully assembled out of the printer, its a good idea to use the smallest layer thickness your 3D printer is capable of extruding. In my case, it’s 0.005″. Thinner layers give the part a smoother finish, which means that there’s less friction between components when they move.

Another thing to note is the support material your 3D printer will use. Make sure the supports are water soluble. These types of prints won’t work on standard consumer printers, as they only extrude model material.

How to Reduce Production Cost with Additive Manufacturing