Part too large for your 3D Printer! Three Tips for Splitting a Large Part

When 3D printing there are times when you just can’t get your part to fit inside of the build volume of your 3D printer. Watch the video below to learn three techniques for splitting large parts (and putting them back together again!).

You can flip your part around, run it on a funny angle, or even try scaling it…but at the end of the day, sometimes you just have to cut the part in half to make it work:

Our first instance is probably the most common. You have a large bulky part that is too long in one dimension to fit in the printer’s build envelope. For this method to work, the part must be one inch or thicker across the mid-section. Second, can the central portion of the part be sectioned through the length of the part and still have an even amount of mass on both sides. This is because we are going to use a stepped dovetail tool that cuts in a “Z” cross-section so you can split your part along two planes (the below picture will explain better than I can).

The dovetail cutting tool can be modeled in SOLIDWORKS and extruded using solids, or if you are inclined, you can create using surfacing techniques. It is also possible to model the cutting tool with draft, this will allow the parts to pull tighter as they are pressed together. You will need to accommodate for adhesive in your joint, and for this reason, we like to add between .010” and .020” of thickness to the cutting tool.

A primary benefit of using a dovetail is that it provides a substantial amount of mechanical hold on the joint, and pairing this with a stepped “Z” dovetail design, means that the joint can only easily be opened in one direction – taking much of the workload away from the adhesive. 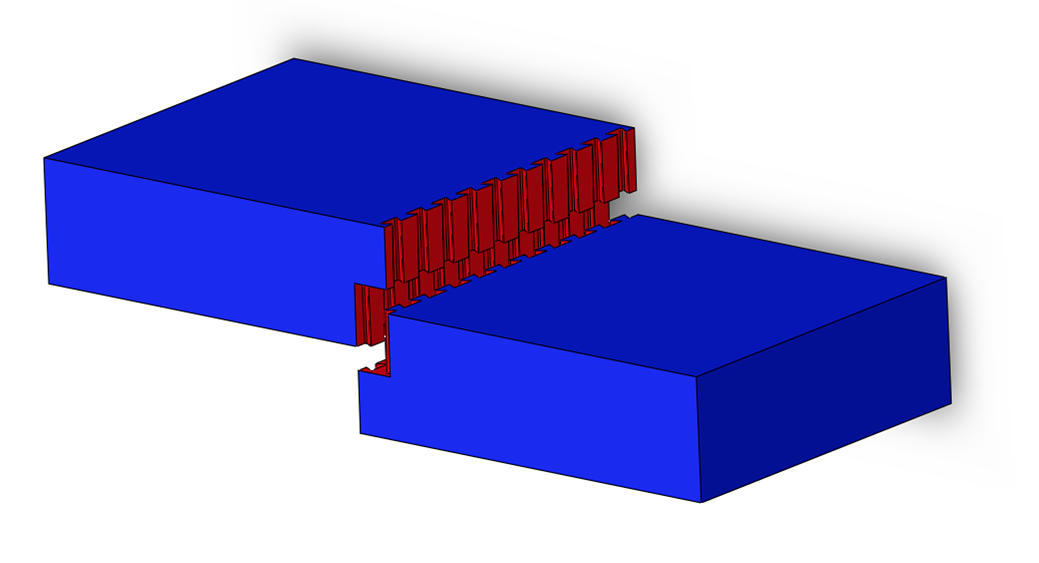 Not all parts are big and bulky. Sometimes you have thin parts or parts with very inconsistent cross-sections that won’t fit within the build volume of a printer. In these instances, a dovetail will be very difficult (if not impossible) to properly align and execute. These thin parts call for a convoluted solution…literally, a convoluted solution. By creating a wavey-stepped cutting tool that runs in two-axis, you can form a large cutting tool that can be used on very thin and oddly shaped parts. Because of the lack of an interlocking feature on these convoluted joints, the joint can be positioned without concern on the part’s cross-sectional width (unlike a dovetail). A secondary benefit of these undulating surfaces is that the joint becomes self-aligning and exhibits greater surface area for adhesive. Unlike the dovetail, a joint of this design offers no real mechanical hold. All your eggs are in the adhesive’s basket. 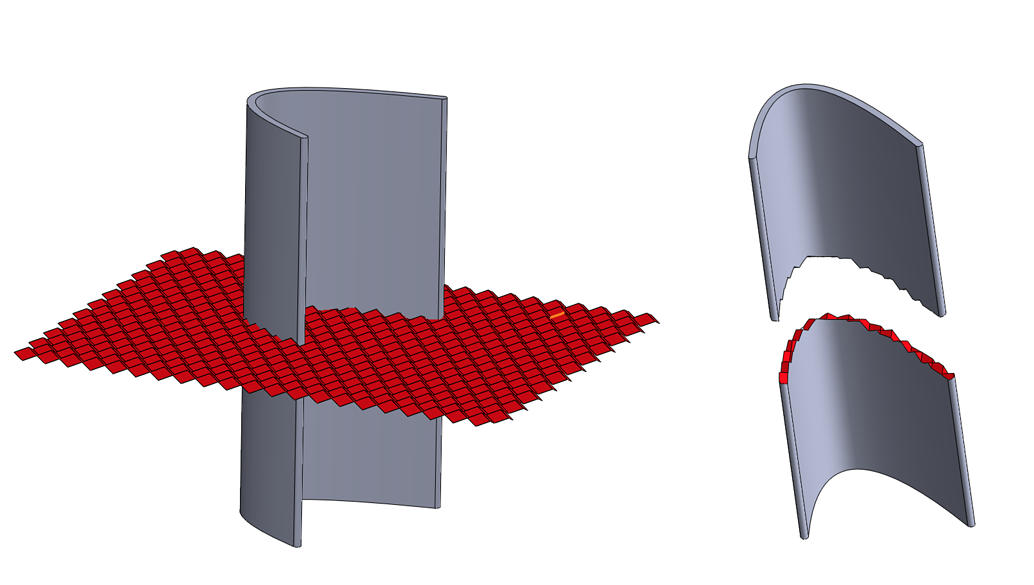 The final splitting technique is not driven by the necessity to print parts beyond a printer’s capacity. Instead, it’s an option to cut down on the amount of support used within a build. It’s common to have parts that require a large amount of support regardless of the orientation of the build. 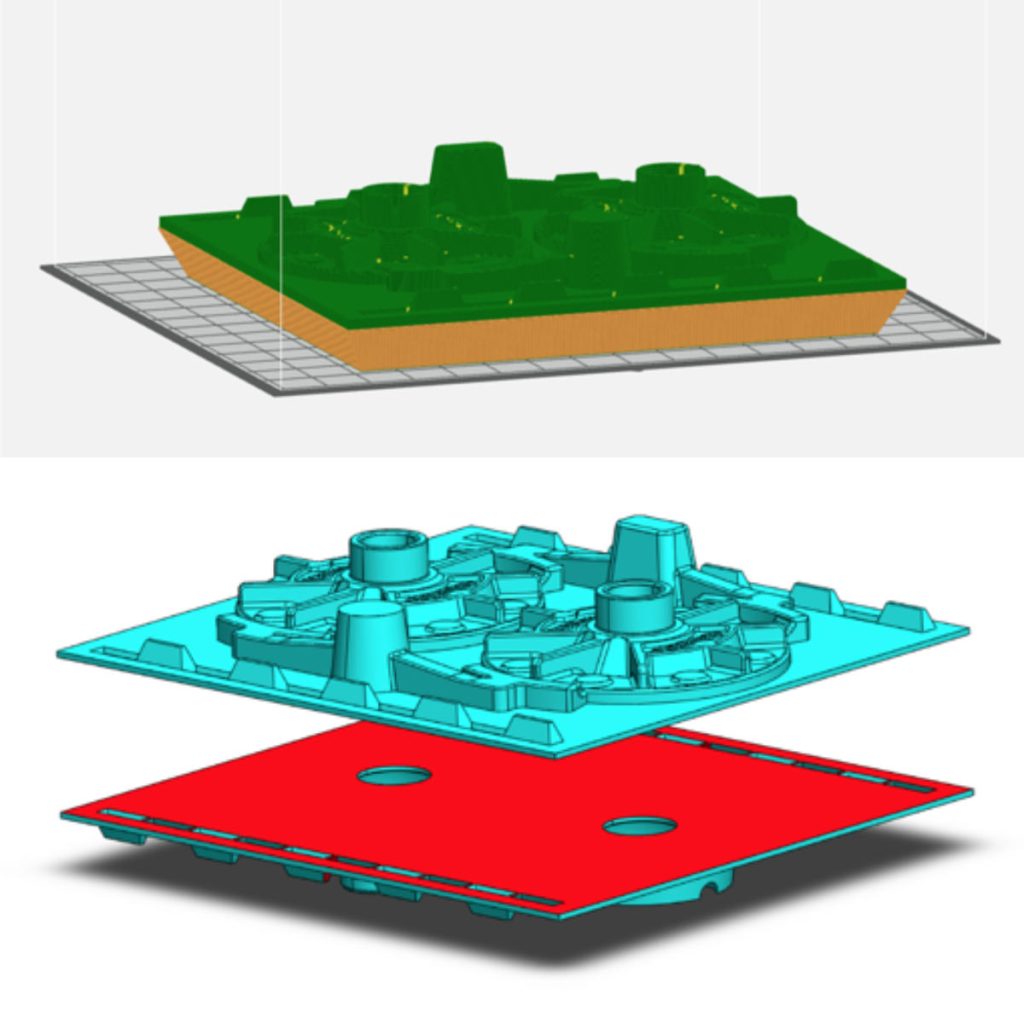 Often, most of this support can be eliminated by splitting the part horizontally and printing the lower half. From there, flipped over with the cut side down as a separate part and finally adhering the two parts together. The key here is recognizing if the amount of labor to bond the parts together is worth the savings of eliminating the support on the build. This tends to be a worthwhile effort on larger parts and parts that tend to have a wide cross-sectional thickness along the planned cut.

There are countless techniques and reasons to split parts and while we just scratched the surface on the topic. I hope these three common scenarios will help alleviate some of your part splitting woes. For more information on other splitting techniques, for example, SOLIDWORKS cutting tool files, or advice on how to best bond your split parts together, reach out to Javelin’s 3D Printing Team and we’d be happy to help!

Posts related to 'Part too large for your 3D Printer! Three Tips for Splitting a Large Part'