GrabCAD Print has a modern UI. It’s simple, well organised, and has a nice big 3D viewer which includes the printer tray and the object in question. Both the middle and left mouse buttons are used for panning and orbiting around the object. The print tray and bounding box size change based on what printer you’ve selected, and the program allows for the user to add multiple printers. Navigating around the UI is simple, you can pretty much drag and drop your 3D model into the virtual tray, select your connected printer, and hit “Print”. Easy. 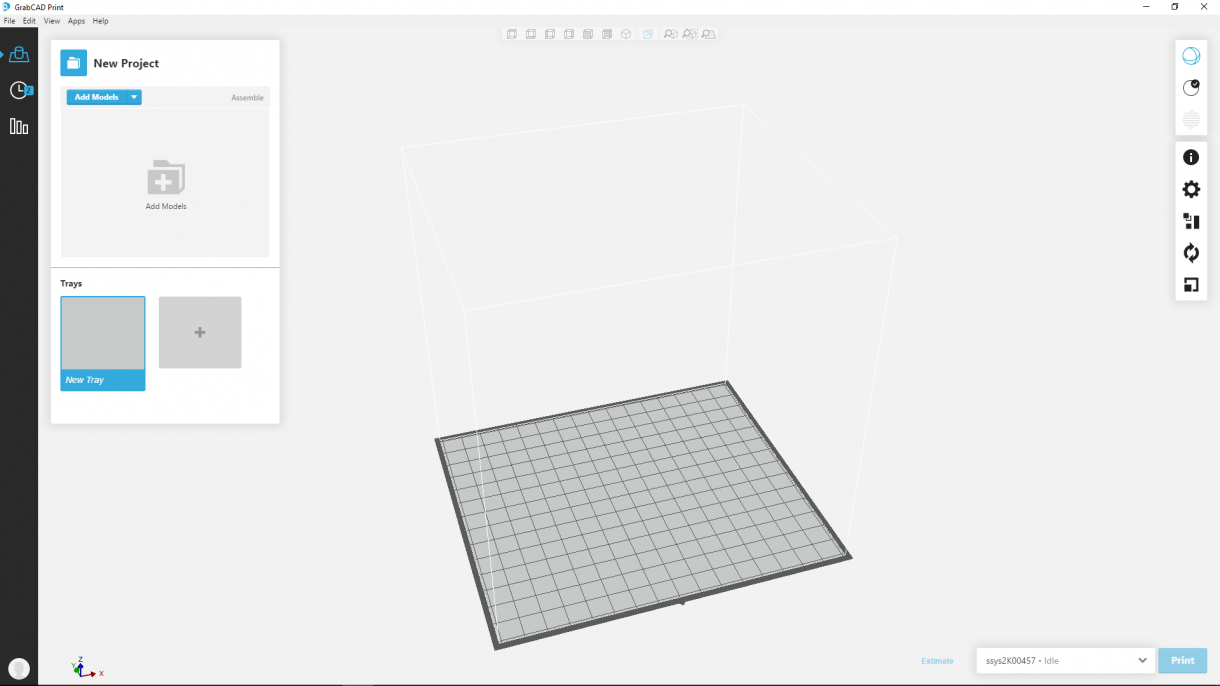 Insight, on the other hand, is a little dated. The UI follows the same Windows 98 design style with big square buttons lined up across the top left toolbar. A 3D viewer takes up most of the window, and navigation around objects is the same as GrabCAD. After using Insight for a little while, however, I got used to its UI and began to discover some hidden gems under the hood, which I’ll talk about a little later.

GrabCAD Print has the capability of importing almost any 3D object file type, from standard STL exports to raw SOLIDWORKS project files (with the addition of an add-on). It also has useful features that help manage printers and print job scheduling. You can monitor your printers in real-time, see how much material is being used, and view estimated build completion time. If your printer has a built in web-cam, that can also be accessed from GrabCAD Print. There are basic print settings available, like slice height, material types for both model and support, and build style. If you have a Stratasys F123 Series printer, GrabCAD Print also includes a sacrificial purge part by default.

One of the biggest advantages GrabCAD Print has is its ability to repair or rebuild broken objects. Let’s say you were to print a desktop phone stand, like the one below. The stand was designed in SOLIDWORKS but to optimise file size, you saved it as a .stl. The process of exporting to .stl formats involves converting the surfaces of your object into a series of triangles. If the object is relatively simple, like this stand for instance, the conversion will be perfect. If a SOLIDWORKS part is too complex, for instance, the computer might miss a few vertices. This is where GrabCAD Print helps out. GrabCAD will analyse the file for any missing vertices. If it finds flaws, it will prompt the user to click “Repair all Models”, and after a few minutes your object will be back to normal. This saves a lot of time trying to manually repair 3D models yourself, however you can always import the actual .sldprt files directly into the program and avoid object conversion altogether. 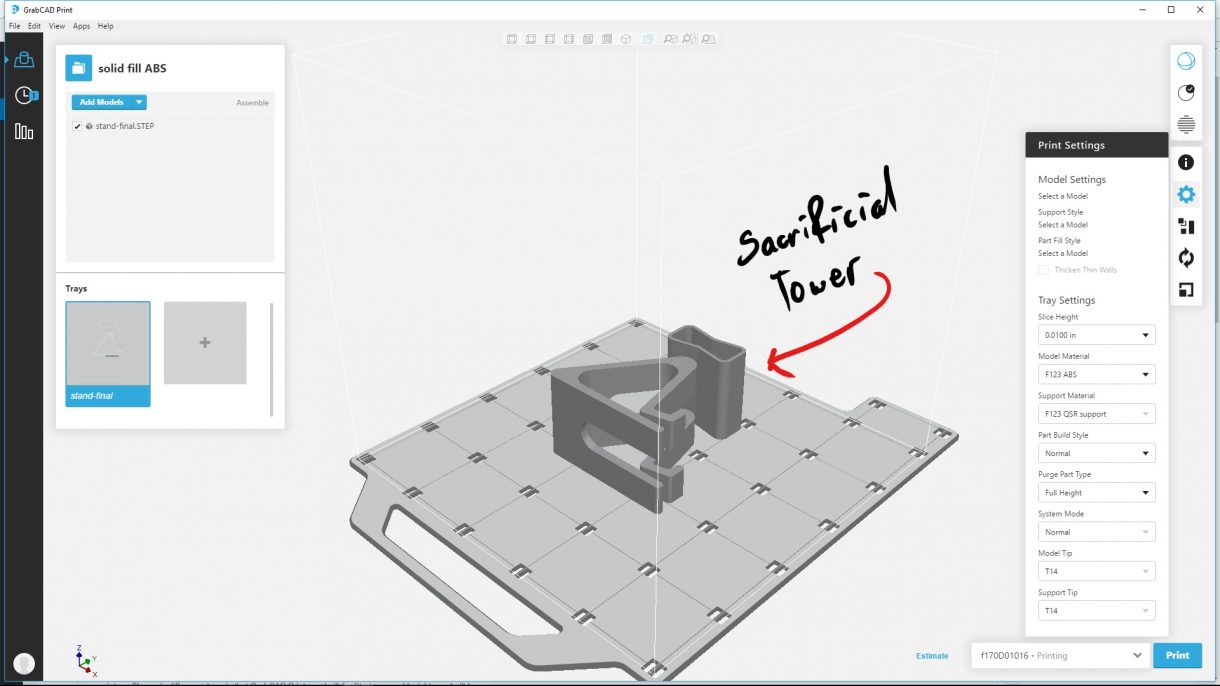 GrabCAD knows whether or not a chosen 3D printer requires a purge part, and automatically adds it onto the virtual tray.

Insight is more complicated than GrabCAD Print, but since it’s been developed for industrial printers it’s incredibly powerful. Every finite detail of a print job can be customised down to each individual layer. Properties like raster width and angle, number of contours and their widths, and amount of air gaps between them are probably the most important ones. Toolpath grouping allows for print material optimisation. For example, if you know where the weaker points of your model are, you can assign that area to a toolpath group and increase the density of material.

In the picture above, I have a desktop phone stand that I’m printing using GrabCAD Print. I know that the two hooks of the stand are where the most weight will be applied (that’s where my phone will sit) so they need to be strong enough to support it. I can only change the density of the entire print in GrabCAD, which means I would be wasting a whole lot of material in areas that don’t need to be that dense. That’s not the same story with Insight. I can assign both hooks to a custom toolpath group and decrease the raster width, therefore increasing the density per layer. By assigning groups, I can optimise not only the strength of my stand, but the material usage as well. 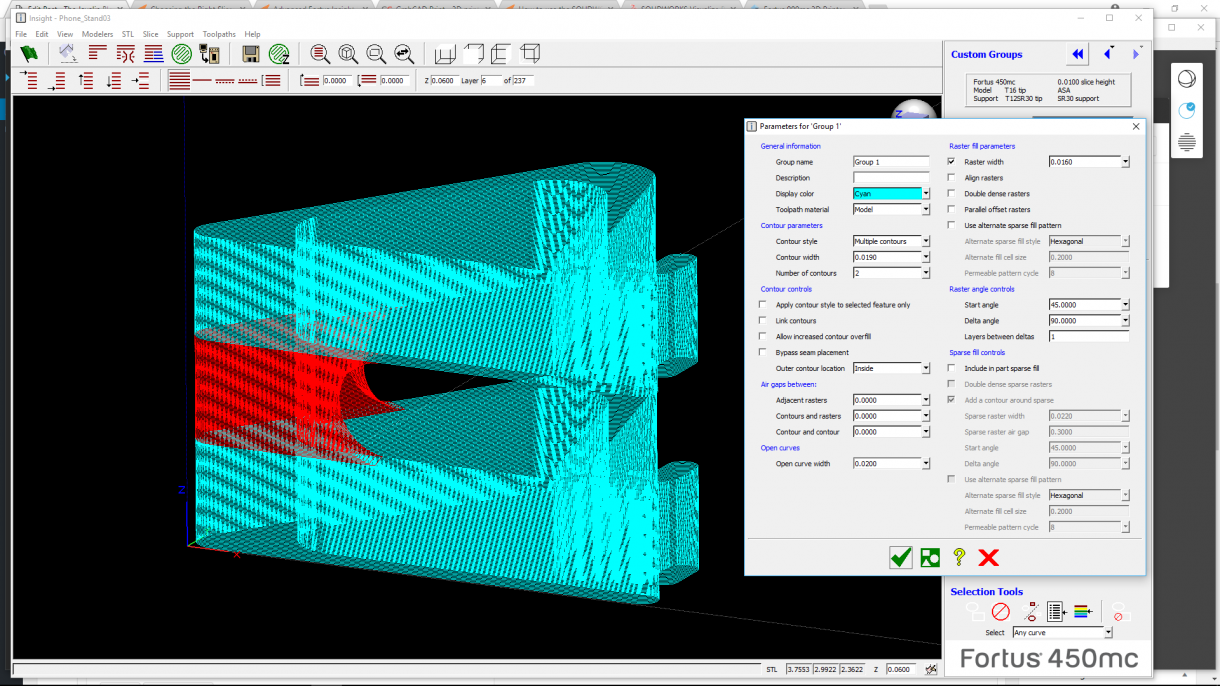 By assigning my hooks to a toolpath group, I can change print density in specified areas, and optimise material usage.

By changing a few print properties in Insight, you can drastically change the physical attributes and dynamics of your final print.

Insight gives you the freedom of internally redesigning your print. Modifying the properties for specific layers allows for control over object strength, weight, heat tolerance, water resistance, and a lot more. The key is experimentation, taking some time to play around with the settings and find a combination of values that fit your needs.

So what should you use?

In short, it’s all up to you. Each of these slicers has its own unique set of “skills”, and its ultimately up to you, the user, to determine how many of those skills come close to – if not match – your specific requirements. GrabCAD Print is all about convenience and versatility. Its capabilities span from small hobby prints to large-scale complex objects, and its UI is tailored toward the everyday user. It’s fast, functional, easy to use, and works with almost every Stratasys FDM Printer. Insight is robust and focuses on the finer details of 3D printing. You can have full control over your print job layer by layer, to obtain the perfect final print at the end. The UI takes a little time to get used to, but that’s a very tiny inconvenience compared to its impressive capabilities.

See in true colour with the Stratasys VeroUltra family of materials