Lenticular printing has existed in the design world for years, and is often associated with novelty toys, movie posters, and trading cards. The technique combines two or more images with an array of magnifying lenses – or a lenticular lens – to create a design that changes depending on the viewing angle. This can be used to create frames of animation, giving the effect of motion, or reveal hidden images or messages. In the past, it has always been restricted to two dimensional designs. 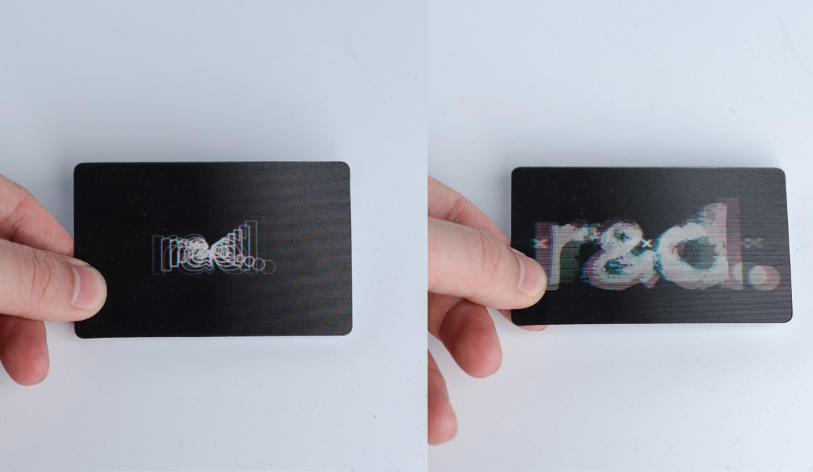 Traditionally, lenticular designs were limited to 2D layouts, like this business card with shifting text.

When MIT Media Lab got a Stratasys J8 Series 3D printer, two designers there saw the potential to innovate. Industrial designer Jiani Zeng and computational designer Honghao Deng were then researchers at MIT, and went on to co-found an AIoT insight company called Butlr Technologies. The two designers, together with their advisors Professor Axel Kilian and Professor Stefanie Mueller, wanted to take advantage of the multi-material capabilities of the PolyJet 3D printer to create something that wasn’t possible with traditional material design. 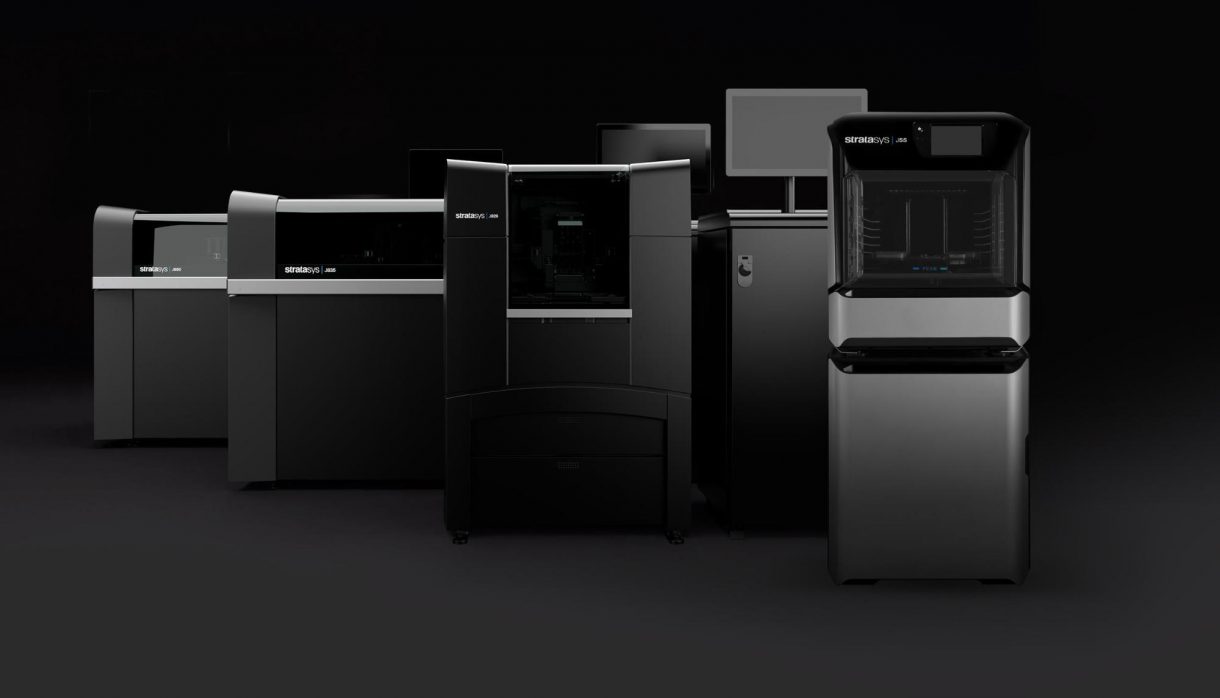 Zeng explained that many designers rely on 3D printing largely for prototyping, and aren’t aware of the wider design possibilities it provides. “There aren’t a lot of people taking advantage of multi-material printing for design industry research.” “There also aren’t many tools that let designers fully manipulate features, or really design freely,” said Deng.

They were interested in pushing past the limitations of traditional design, removing the need to simply replicate materials that already exist. Zeng and Deng wanted to show that, through multi-material printing, it’s possible to merge digital and physical fabrication to create entirely new optical properties and user experiences. 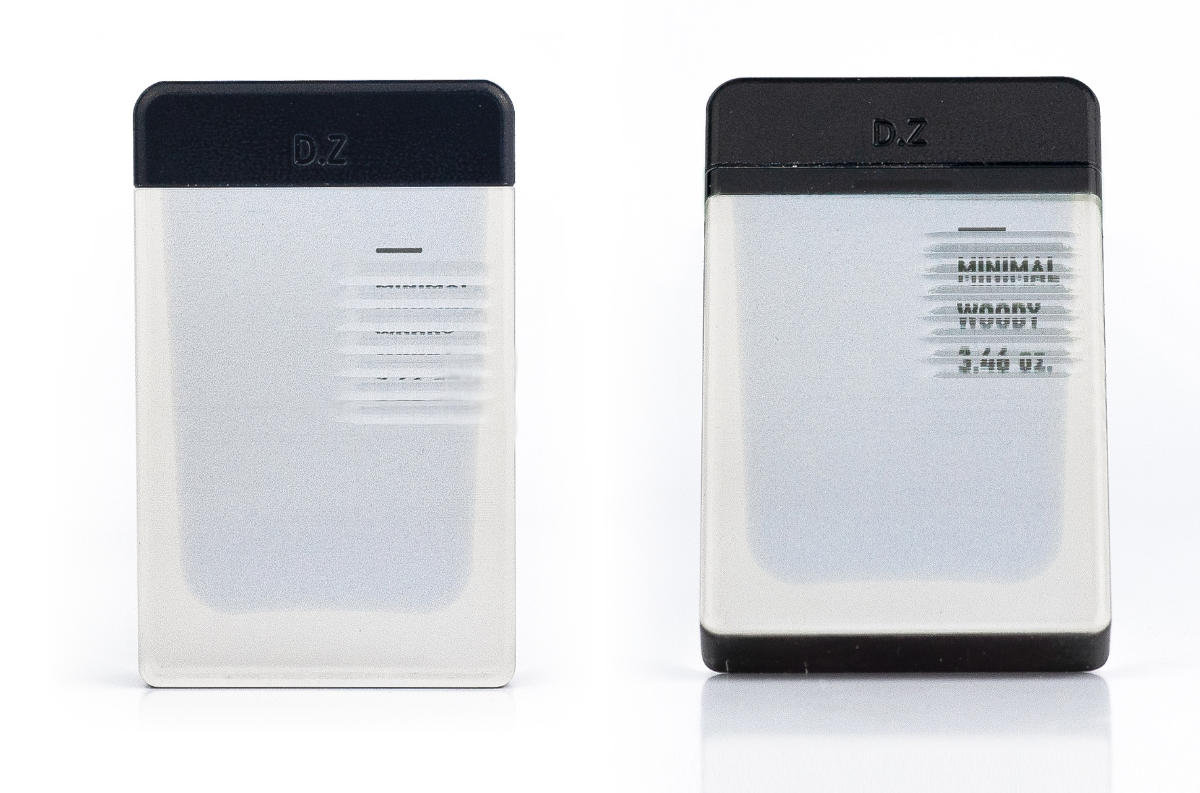 Illusory design that is physical

They envisioned a dynamic physical design that responded to user interaction, but didn’t rely on robotic or electronic components. Consumers today are used to responsive products, but these are typically limited to electronic components like touchscreens. There are a huge number of potential applications for a dynamic product whose inherent design creates user feedback, ranging from functional to creative. “We wanted an end product that produced a dynamic experience, where the illusory design was purely physical and embedded into the model,” said Zeng.

That’s where lenticular printing comes in. They used volumetric design and GrabCAD Voxel Print™ capabilities to create 3D printed parts incorporating a lenticular effect. Their technique relies on several different functioning layers, instead of just an outer surface texture, and requires information to be embedded into each three-dimensional pixel (voxel). Stratasys Voxel Print software, which is enabled on the J8 series, allows customization at the voxel level, making it possible to generate corresponding locations of spherical lenticular lenses. “It’s sort of like embedding time sequences into the material – we had to dive into the voxel level to achieve those interactive results,” Deng explained. 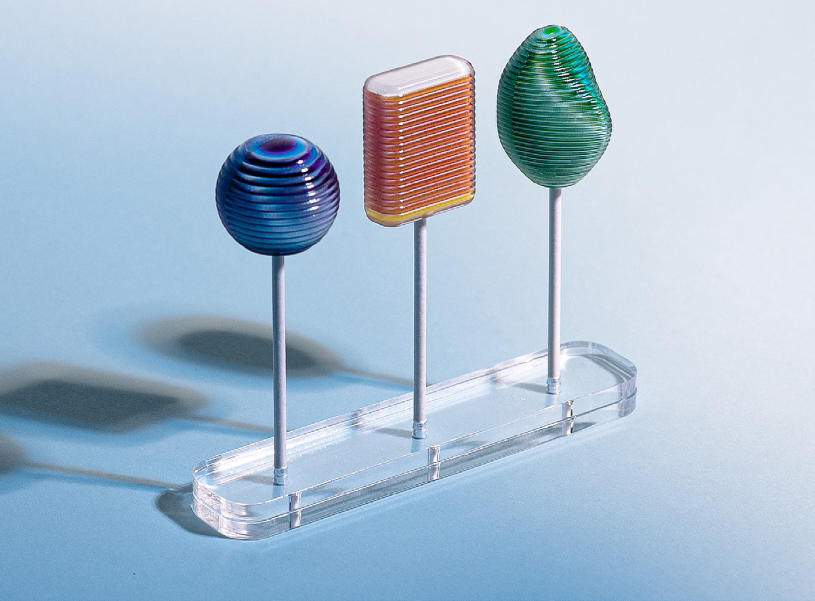 “Loopop” is the world’s first interactive lollipop, and puts a playful spin on traditional food design

Zeng and Deng had to invent a new computational pipeline to calculate the ideal lens geometry for each design. Because all aspects of the design are interdependent – the overall form, colour and pattern placement, and texture must be considered to accurately generate the lenses – the lenticular models had to be first designed with CAD, and then replicated with complete accuracy in a physical form. Only PolyJet, with the addition of Voxel Print technology, allowed the researchers to fully customize each layer of design with CAD, and then 3D print an exact replica of the digital model. “This cannot be done with other methods,” Zeng said. They also relied on the multimaterial capabilities to develop the lenticular models.

The design consists of two basic layers: the top layer with lenticular lenses, and the colours or pattern embedded into a base layer. The lenses were 3D printed using VeroClear™, while the base layers were printed with the VeroVivid™ range of rigid materials. The technique can be used to create a variety of 3D lenticular designs, such as shifting patterns, interactive written content, and even touch-sensitive visual effects using a flexible material like Agilus30 Clear™. 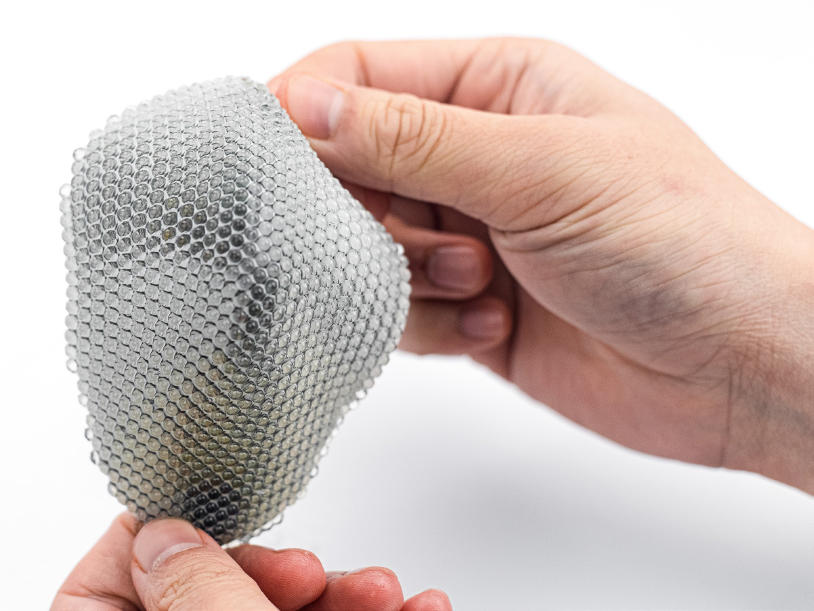 What started as a side venture became a project with a much wider potential. Designers who saw the final parts couldn’t believe they had been 3D printed. “We really want more designers to see the possibilities of making something that doesn’t exist in the real world – we’re showing it’s possible to turn this crazy rendering into reality,” Zeng said.

The illusory material immediately gained wider recognition in the design world, and won two Reddot Design awards in 2020, including the “Best of the Best” award. 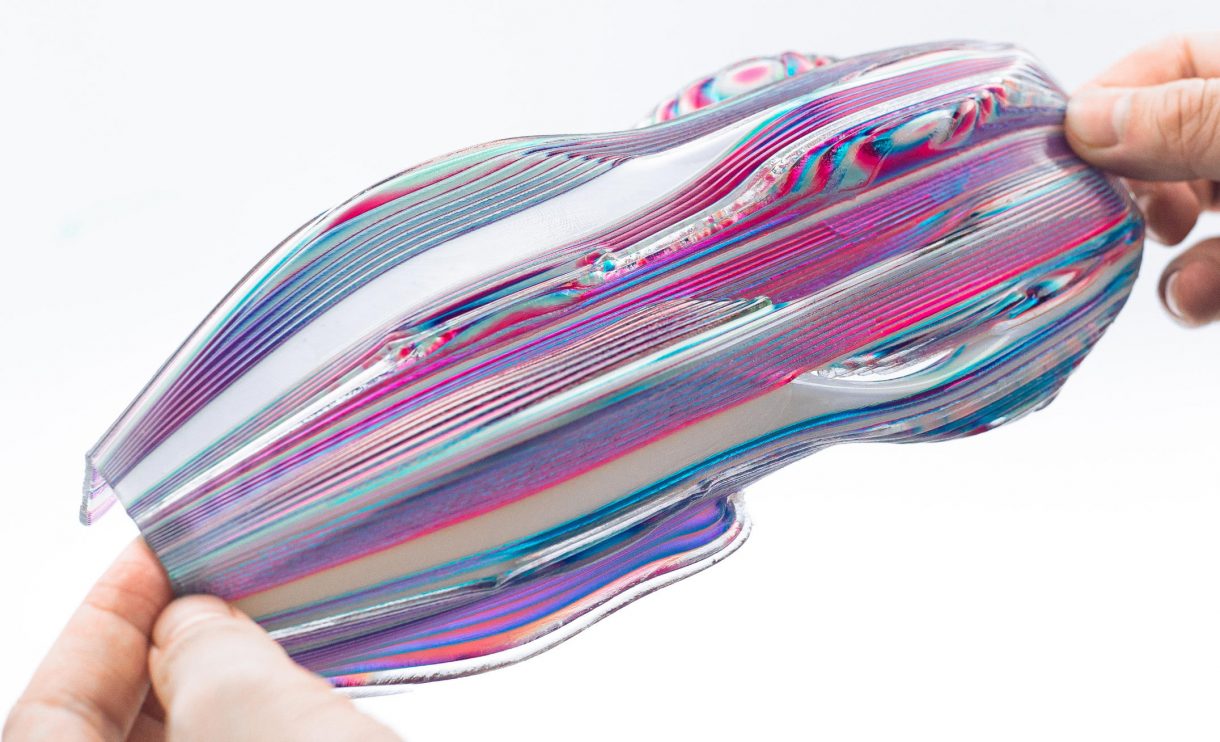 Zeng and Deng plan to continue refining the pipeline and computational workflow they’ve invented, and hope to make it an accessible technique for any designer who wants to take advantage of multi-material 3D printing. They see a wide variety of applications for lenticular 3D printing, from consumer products to the fashion industry. 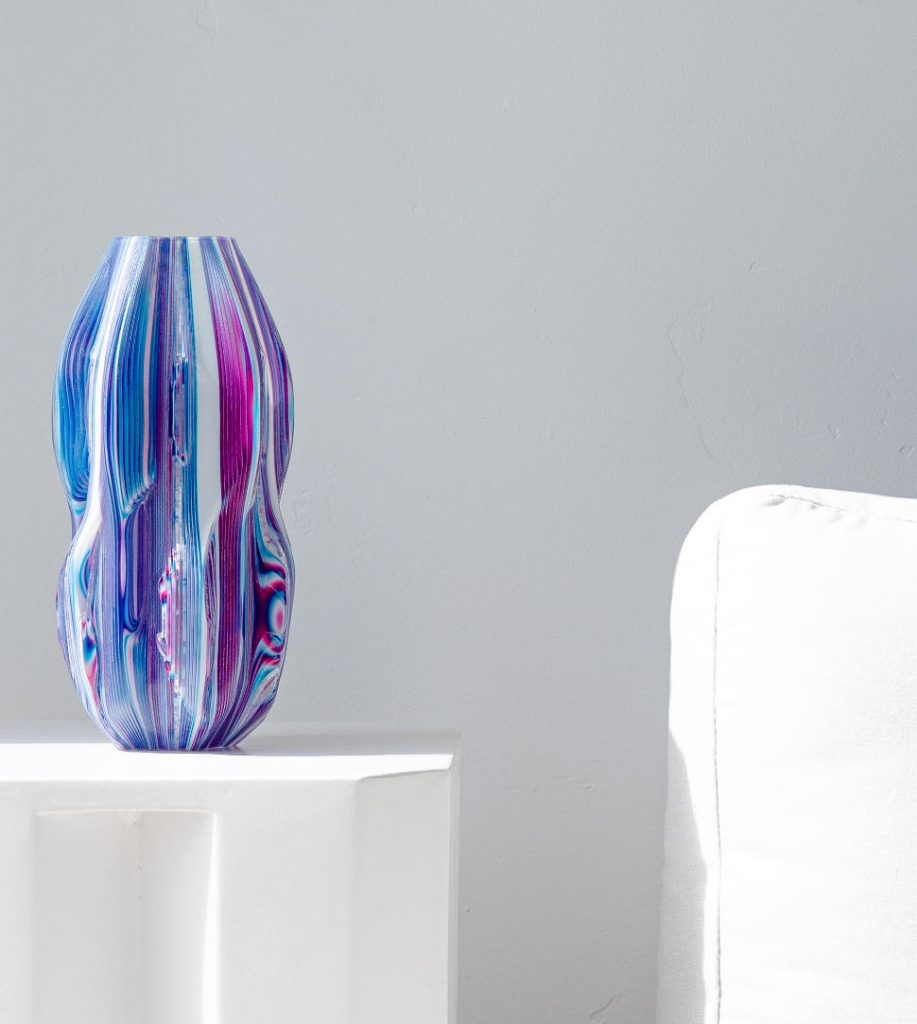 Fashion label threeASFOUR has already explored some of the possibilities of lenticular design with 3D printing – the 2019 Chro-Morpho collection includes pieces inspired by iridescent insect wings. Stratasys worked with the designers to 3D print spherical lenticular cells directly onto polyester fabric, resulting in a dress that changes colour with every movement. To Zeng and Deng, lenticular 3D printing represents an evolution of material design that relies on both the digital and physical worlds. “It’s a new generation of materials,” Deng said. “The future of design is responsive.”

Should I choose SOLIDWORKS Desktop or 3DEXPERIENCE SOLIDWORKS?

For over 30 years Stratasys have been pioneering 3D Printing technology, solving problems, questioning, inventing and reinventing. Continually asking, “How can we help our customers turn a great idea into a great success?”