To make those solutions faster and more accurate, the company embraces new technology in a variety of areas, including 3D printing. Working in a high production prototyping shop, the team at Kinetic Vision relies on the right tools to iterate designs efficiently and communicate those designs to clients. When Kinetic Vision installed the Stratasys J55™ 3D Printer, an office-friendly, affordable printer powered by PolyJet Technology™, the team immediately saw its potential to help with product development.

“I was expecting this to be a large unit, and it’s not. It’s visually unintimidating, and it looks like it could sit next to my desk,” explained Tony Guard, Kinetic Vison’s director of innovation and industrial design. “From what you get out of it, I would have expected a large, very expensive machine.”

After several experimental prints on the J55, like a hyper-realistic donut model, the team began working on a project that required a higher level of prototyping accuracy than traditional methods allowed.

The client was AeroFlexx, an Innventure Portfolio Company working to develop an innovative product of the same name. Developed by scientists at Procter & Gamble, AeroFlexx pak technology is an alternative to traditional liquid packaging that solves several common issues for both distributors and consumers. 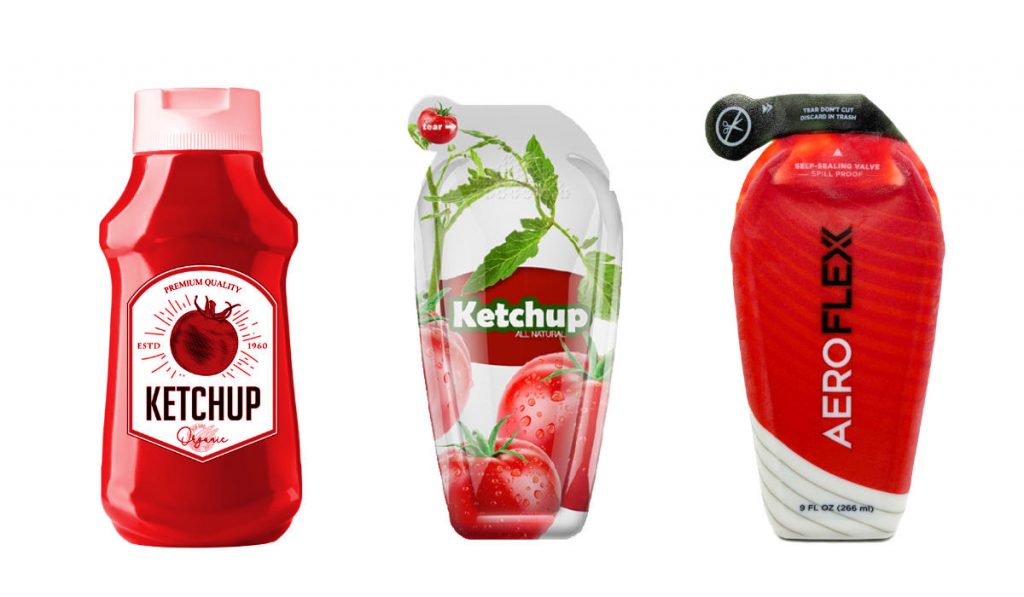 “AeroFlexx packaging is good for the customer, the consumer, and the environment,” explained Cedric D’Souza, CTO of AeroFlexx. The packaging features flexible walls with a unique inner air-rib system to provide structure. Along with a self-sealing valve, AeroFlexx packaging incorporates a lightweight design that is easier to ship and far less prone to breaking or leaking than traditional bottles. The design is a win for consumers – it provides no-mess, precise dispensing and uses less plastic than standard bottles, making it more environmentally friendly.

AeroFlexx also provides a completely new visual experience for their packaging design concepts. “You have the ability to dress the bottle in a 360-degree design, which creates new marketing opportunities,” said D’Souza. However, the innovative concept was difficult to prototype accurately. The packaging prototypes required several complex design elements, like transparency, colourful graphics, legible text, and a three dimensional visual experience. Virtual designs provided a good base, but the Kinetic Vision team wanted to provide a tangible way to communicate the AeroFlexx design to customers. “We were really trying to push the envelope with a concept we were finding very difficult to communicate visually, or with 2D renderings,” explained Senior Industrial Designer Derek Rund. For the team at Kinetic Vision, the J55 came in at the ideal time. “The J55 was so perfect for this project, we couldn’t not use it,” said Rund.

Although D’Souza was initially hesitant about the use of 3D printing, a single sample print changed his mind. “I was expecting something like SLA – I’ve seen many parts made that way, and I thought that [the J55] couldn’t be that different,” D’Souza said.

But then Kinetic Vision sent him a photo of an AeroFlexx sample printed on the J55. “What really caught my attention was the ability to showcase the unique features of the AeroFlexx package, like the transparency and colour,” D’Souza said. “In the past it was always hand painting or a sticker.”

Past physical models of the AeroFlexx packaging were limited to opaque SLA models. Without transparency, it would have been impossible to communicate the innovative design and internal components to customers. According to Rund, traditional manufacturing methods offered limited, time-consuming options for creating the graphic aspects. These options included applying graphics to a 3D model in pieces and then reassembling the prototype, and creating special labels that could be heat-sealed to the physical model. Both options required a significant time and cost investment.

“It would be a lot of time and money spent just trying to figure out all those challenges, just to get a prototype,” said Rund. The J55 solved a number of these design issues. Transparent VeroClear™ material allowed the team to create a customized, functional design that incorporated visual layers and displayed the interior chambers. VeroClear combined with the VeroVivid™ range of colours also allowed for semitransparent, full-colour graphics printed right on the part. 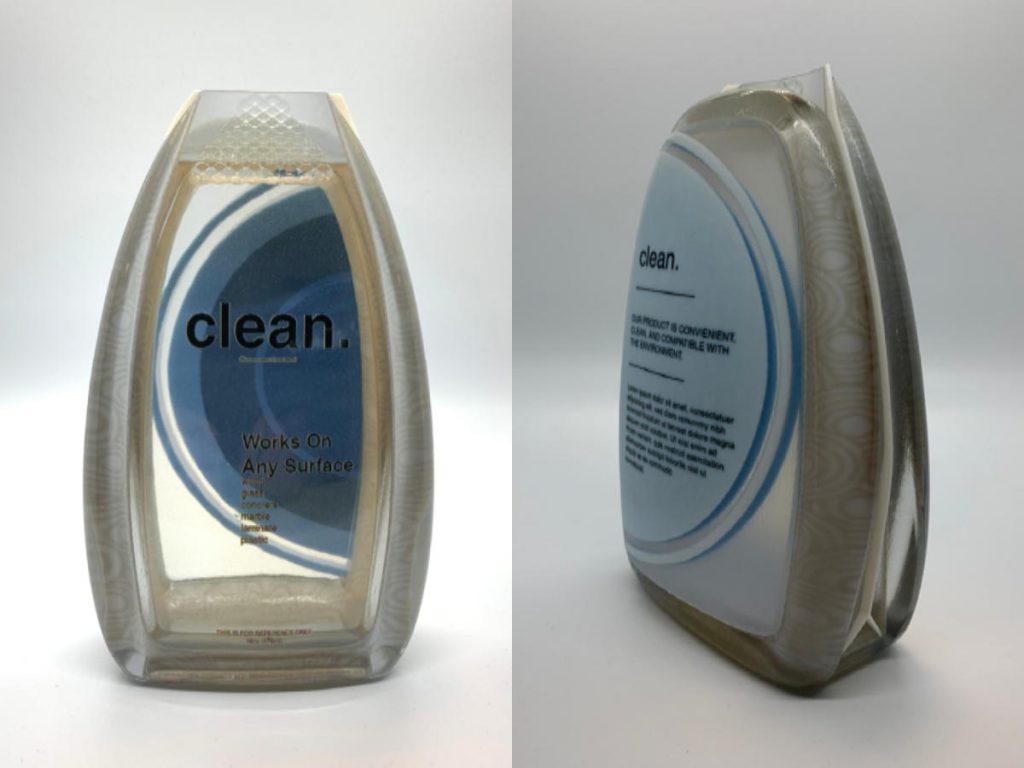 AeroFlexx pak prototypes printed with VeroClear for a transparent design.

“To get that 3D effect and semitransparent design is very difficult to prototype with traditional methods. Having full Pantone colour capability with transparency makes it an incredibly easy process,” explained Aerin Shaw, partnership lead at Kinetic Vision. Additionally, the efficient, user-friendly process meant the team could go from a digital model to a full colour, transparent part in just a day.

“Every time we have a new shape we’d like to engage with the customer, this is going to become part of the marketing and engagement strategy,” D’Souza said. He looks forward to partnering with Kinetic Vision on future projects, and sees the J55 as a major benefit to innovative product design. “There is no possible way we could make a good, compelling sale by articulating the art of the possible without something like this.” 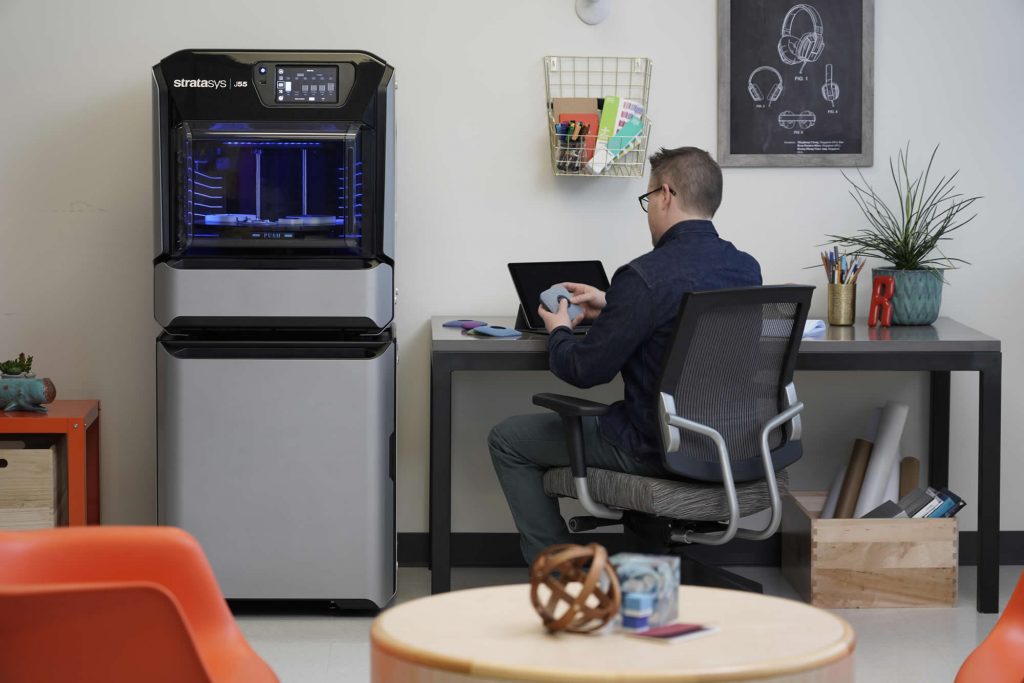 Guard knows this is just one of many projects that can benefit from the power of PolyJet. “The J55 allows us to create a more finished product representation that we can show to our clients as part of Kinetic Vision,” Guard explained. “It allows us to present ourselves at a higher level.”

Own your design process from start to finish. From fast concept models to quality high-fidelity models, the office-friendly Stratasys® J55™ 3D printer is an affordable option for maximum designer output.