At Javelin, we teach a lot of SOLIDWORKS training classes that have great techniques, I’ve often said: ” Oooooooh! Wish I knew that years ago.” So, this article describes SOLIDWORKS Advanced Part Design techniques with the creation of an automotive wheel/rim using equations and configurations. With these techniques I can produce many sizes of rim with just a few dimension changes.

I have a certain affinity for a German automotive company. German cars tend to outperform American rivals in terms of performance, comfort and reliability. This comes at a cost, though, I’ve had to replace a water pump on a cramped engine bay, filled with an inline 6 cylinder and a turbo…twice!

When you look at a tire on a car there is a bunch of numbers, these all site regulations in one way or another. Using my car for example, the main larger numbers are 255/35/18. Meaning the rim is 18 inches in diameter (tall) and the tire is 255mm wide. The side wall is described in percentage as tall as the width; in my case 35% or 89mm or 3.5 inches wide. The only dimension the tire doesn’t give you is offset. Offset is the measurement from where the rim mounts to the wheel. Sometimes this needs a positive (closer to the fender) offset to get over large brake calipers or negative (towards the center of the car) for better aerodynamics, for example.

Designing the Rim for a tire requires some setup, so here is my first sketch which will be used for a revolved feature to create the basic shape. Note that I have named the major dimensions for ‘Rim Width’, ‘Rim Diameter’ and ‘Hub Diameter’: 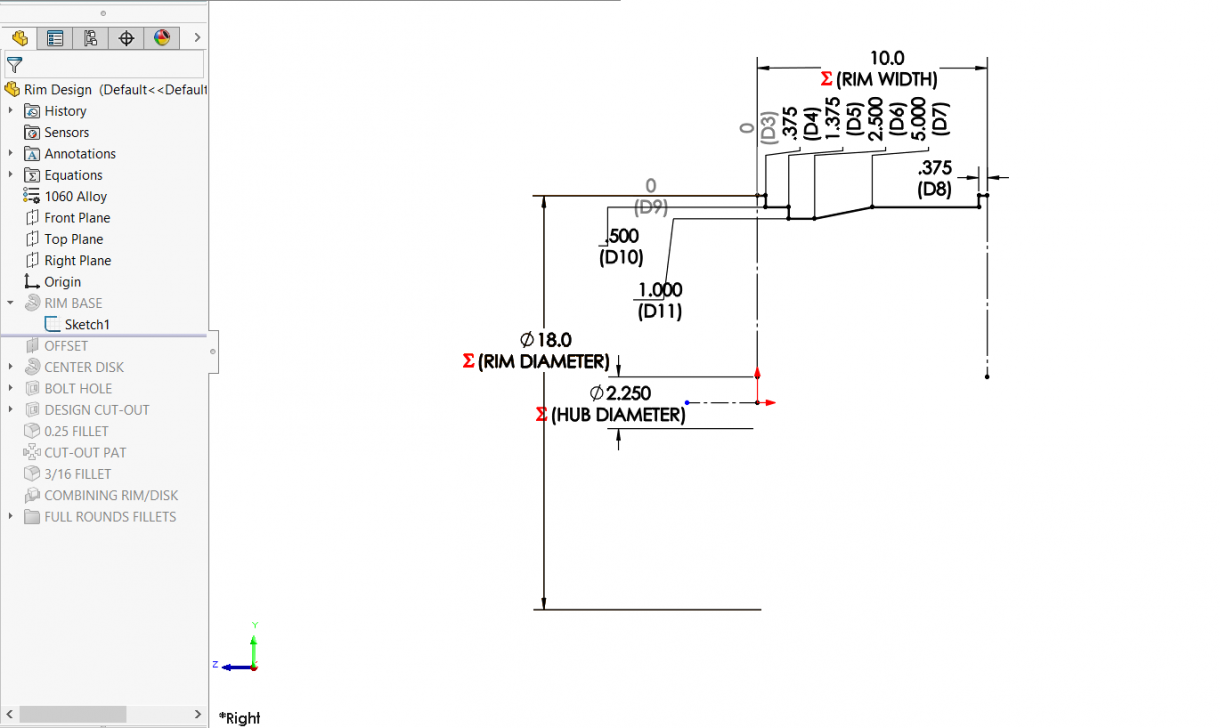 Revolving the sketch gets the basic outer rim shape as shown below. You’ll notice that I have some equations built in, we’ll get into those in more detail later. The second feature is trying to decide how much curve and what would look best. This is done through the curvature of the ‘center disk’ feature, which was probably the hardest area of this part. 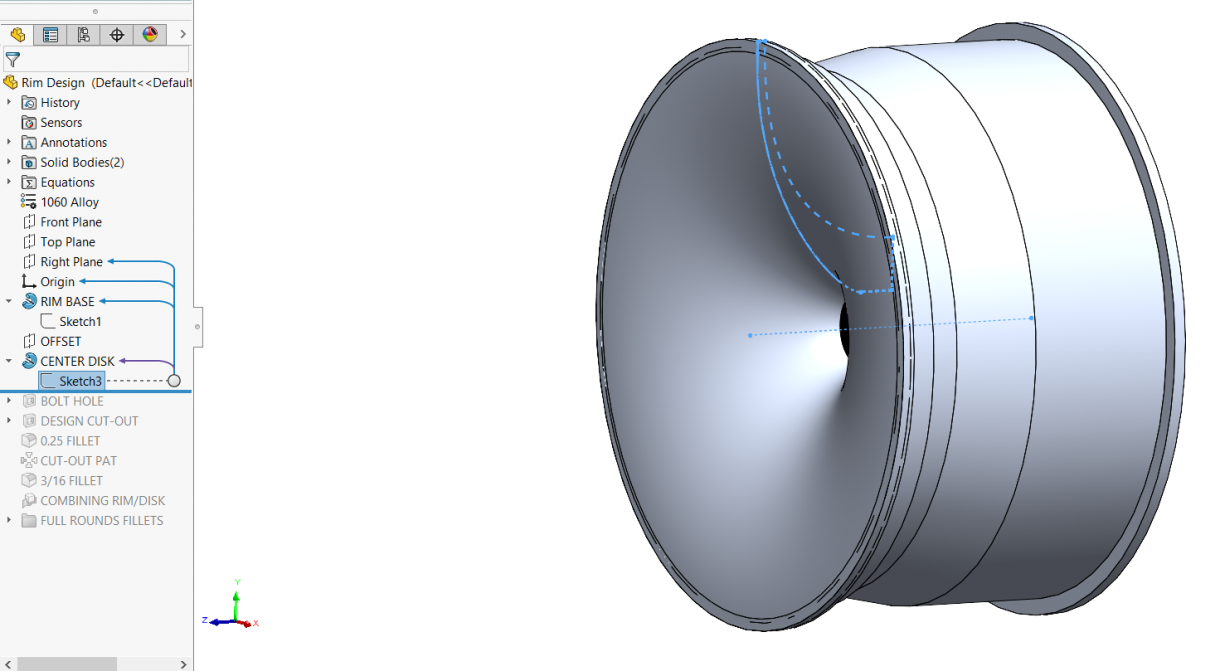 The rest is very basic cut extrudes, fillets and patterns. Shown below is the extrude-cut sketch that later gets a circular pattern. 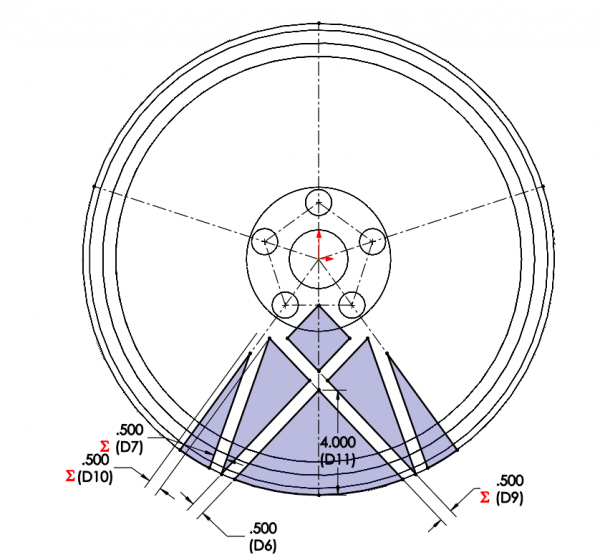 Extrude-cut sketch for a circular pattern.

My goal here is to have this default part fuel other similar parts., so I want to make several configurations. Using the equations helps me make modifications quickly, as long as you are realistic with the dimensions. I wouldn’t expect this rim to be 30 inches in diameter and still work, but this 18 inch rim made into a 22 or a 16 inch, most definitely.

Equations for the Rim design

When I make configurations, I like making sub configs under one heading. So in this case I am using the rim diameter as my heading and adding  any modifications underneath it.

Having the equations allows for an easy dimension switch. When changing the dimension, you must specify what configuration[s] you want to change. Warning! If you don’t specify – it will change all configurations. You’ll see that I labelled these with Width, Offset and Bolt Hole Circle. These are the common dimensions that change for rims. 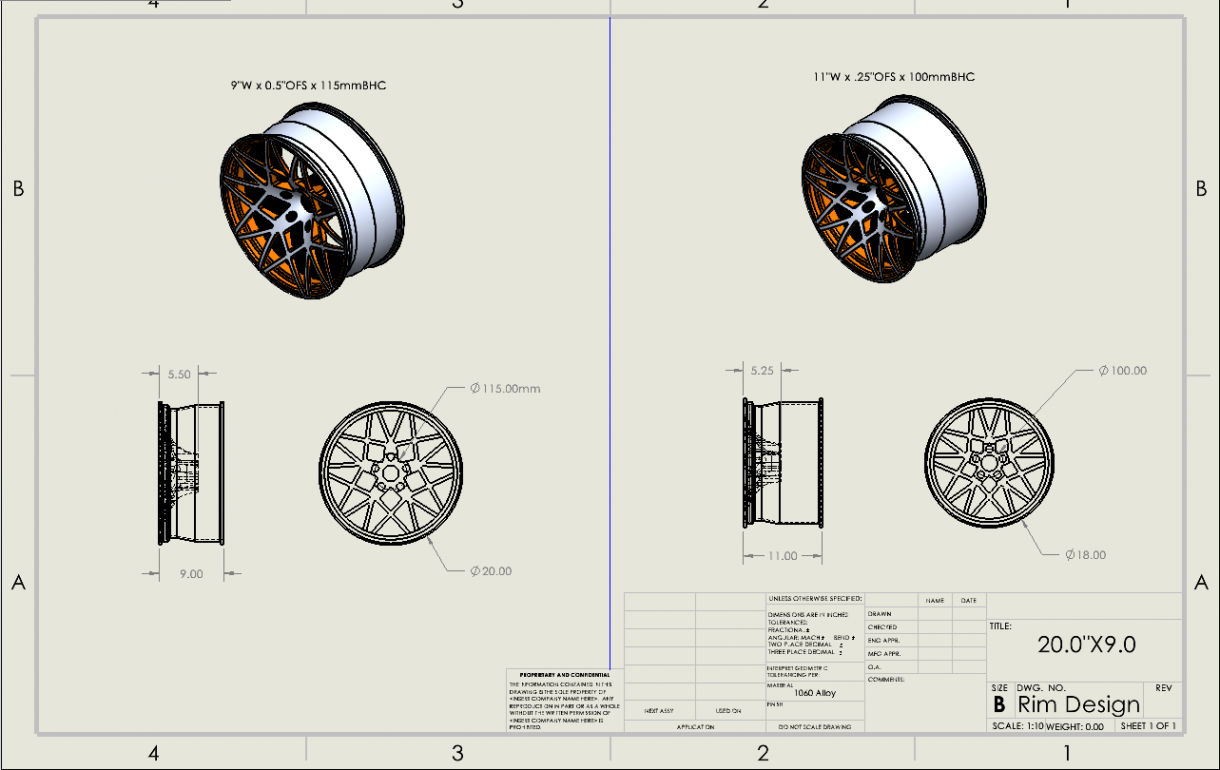