When manufacturing sheet metal parts from a SOLIDWORKS model and drawing, how can we ensure that raised features (also commonly referred to as formed features) will protrude from the correct side/face of the part?

This article guides you through how to control and communicate, in SOLIDWORKS, which side of the flattened part is up during manufacture, and in which direction the raised features protrude.

During punching/cutting of a sheet metal part from the blank, it is best practice to have any formed/raised features protruding upwards, such as louvers, lances (a.k.a. cable ties), ribs, dimples, etc., otherwise any features that protrude downwards can compromise the quality of the part as they contact the supporting bed of the machine (often comprised of brushes or roller balls) and can cause the sheet to bow upwards around the raised features.  Downward-protruding features are possible to make, but it is usually best to avoid them wherever possible.

The “up” side/face of the flat part is first set in the SOLIDWORKS model, driven which face is selected in the Sheet-Metal feature at the bottom of the tree.  Edit that feature to confirm which face is the Fixed face… that face will be considered as “up” when exporting to a DXF file.  If desired, an alternate face can be selected, on either the inside or outside of the formed/bent/folded part.  Once the DXF file is saved, it should then drive which side is up in the punching/cutting CNC programming software: 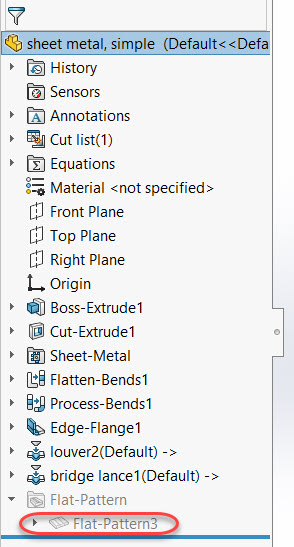 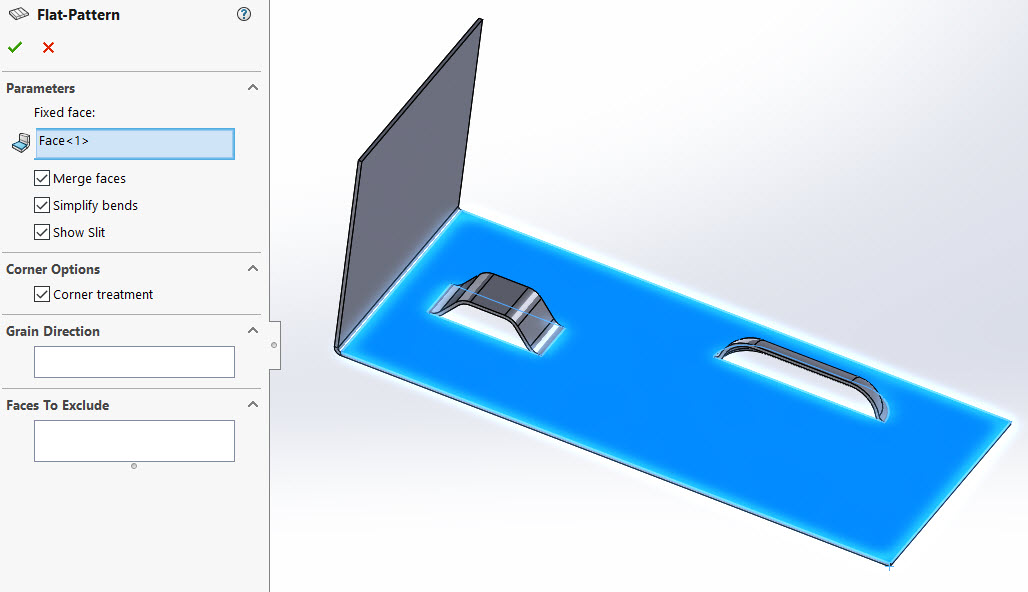 When editing the Flat-Pattern feature, the Fixed face determines what is the upward-facing side of the flat part during cutting/punching.  All faces tangent to that (due to round bends) will be up in the flat state.

To draw the reader’s attention to the presence of raised (formed) features, we can set the color of those features to something more striking than the default color.  The setting is found in in the drawing under Document Properties > Sheet Metal MBD > Flat Patten colors > Form Feature and should also be set in the drawing template so that it applies to all future drawings created from that template.

If you find that the settings do not immediately take effect in the flat pattern view, then you will want to try this workaround: try setting other colors in the list, such as Model Edges, to some other color than the default, OK the changes, and inspect the drawing view.  The Form Feature color should by now show as the new color.  If it doesn’t, then go back into Document Properties and change Model Edges back into black again (at which point we may feel compelled to break out into an AC/DC song!).  That should be enough to trigger the change to the Form Feature color and complete the workaround. 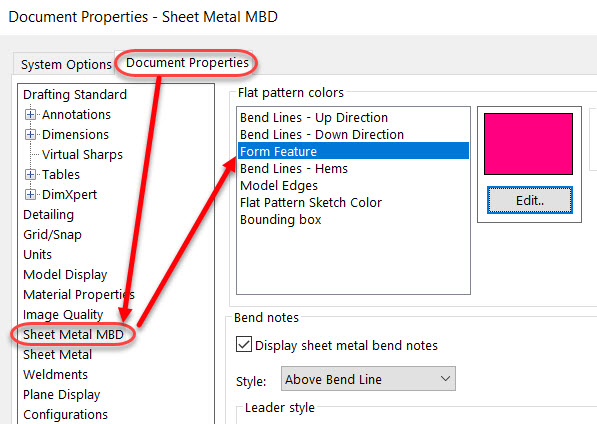 And the result in the drawing:

By projecting a view from the flat pattern view, it becomes clear which way the formed features protrude (ideally upwards), to the benefit of the designer, and CNC programmers, and machine operators doing inspection on the flat part prior to completing the run of parts in their flat state.  Note that the drawing shown here uses Third angle projection (commonly used in North America) in Sheet Properties .  If first angle projection (used more in Europe) were used, then formed features would show as protruding in the opposite direction. 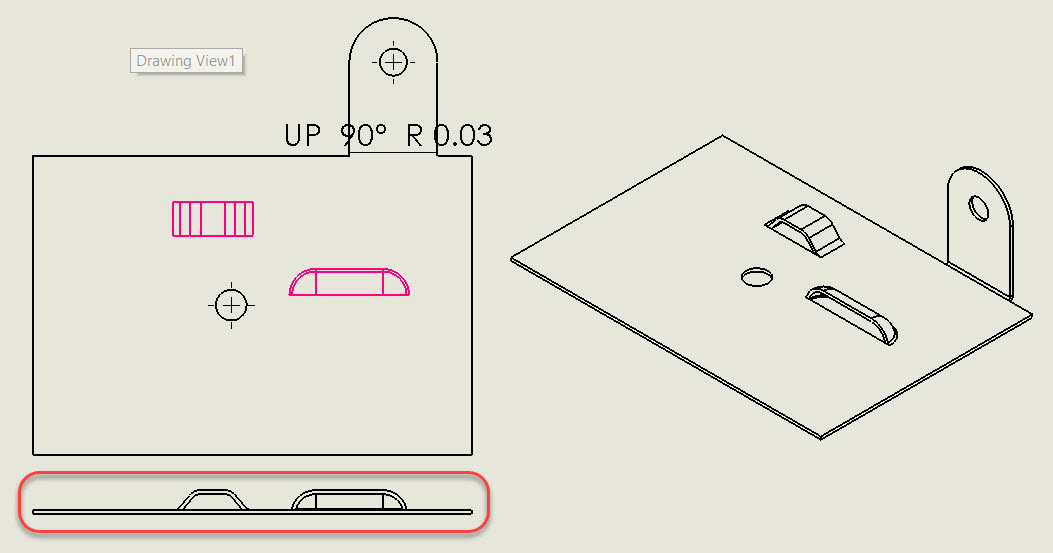 Projecting a view from the flat pattern view (third angle projection), in order to show protrusion direction of the formed features

Learn more SOLIDWORKS tips and tricks in our Sheet Metal and Drawings courses!

How to Split and Merge a SOLIDWORKS BOM Table

How to Copy and Paste in SOLIDWORKS

How to Automate Sheet Borders and Title Block Options in SOLIDWORKS

How to Automatically Exclude a Component from a SOLIDWORKS Section View