In this tutorial, I am going to walk through how to do some design work from a 3D scan file of a pipe cluster that I imported into Geomagic for SOLIDWORKS. Let’s take a look.

The first step is to reorient the mesh so that the mesh is centered on the front, top, and right plane and facing in the right direction. I’ve also used a Geomagic tool to extract a couple of bits of geometry, a couple of planes, and cylinders that represent the locations of critical components that my coworker is going to focus on and use as a starting point. I don’t want to do the entire redesign in Geomagic for SOLIDWORKS, and I also don’t want to try and auto-surface the whole thing because that will be time-consuming, and this is not a very clean mesh to begin with. 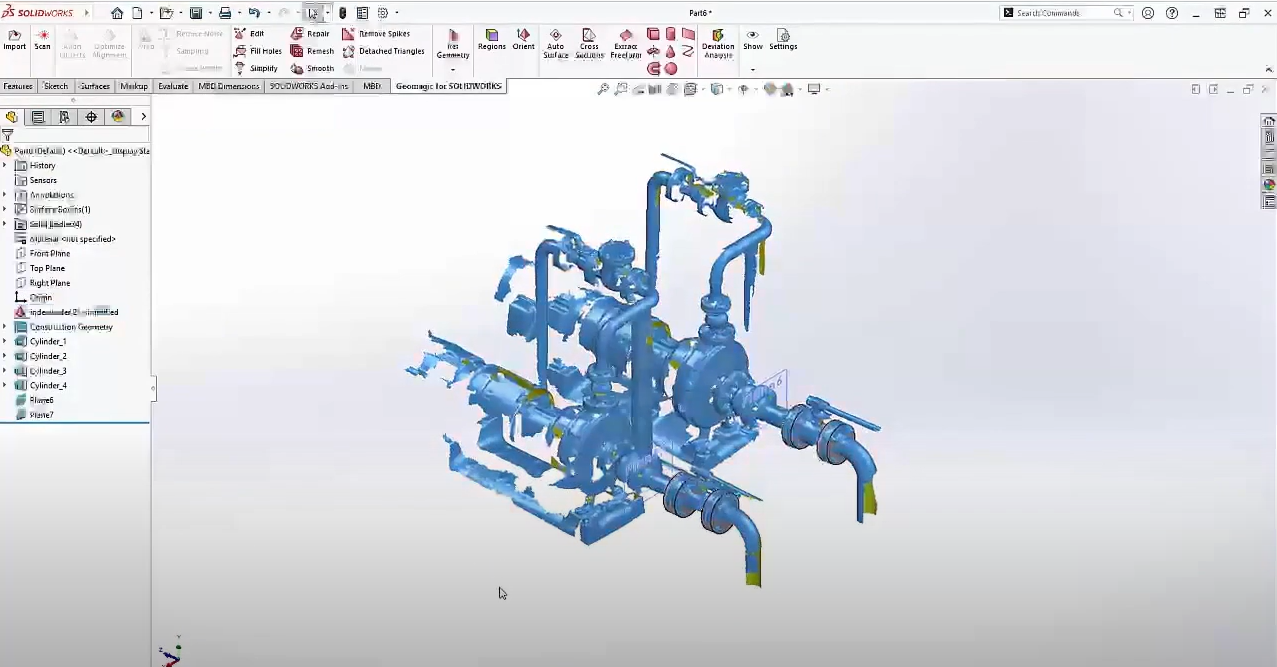 Geomagic for SOLIDWORKS plug-in is only active in SOLIDWORKS part mode. That means when I bring this part file into a SOLIDWORKS assembly, all I can see, and all my coworker is going to be able to see, is the cylinders and planes that I’ve created. How do I fix that? I’m going to take this mesh file and save it as a new STL file. I’m then going to rename it so that I can find it later. When I go to open the file, I won’t open it using the Geomagic tool, but simply do a File > Open in SOLIDWORKS. 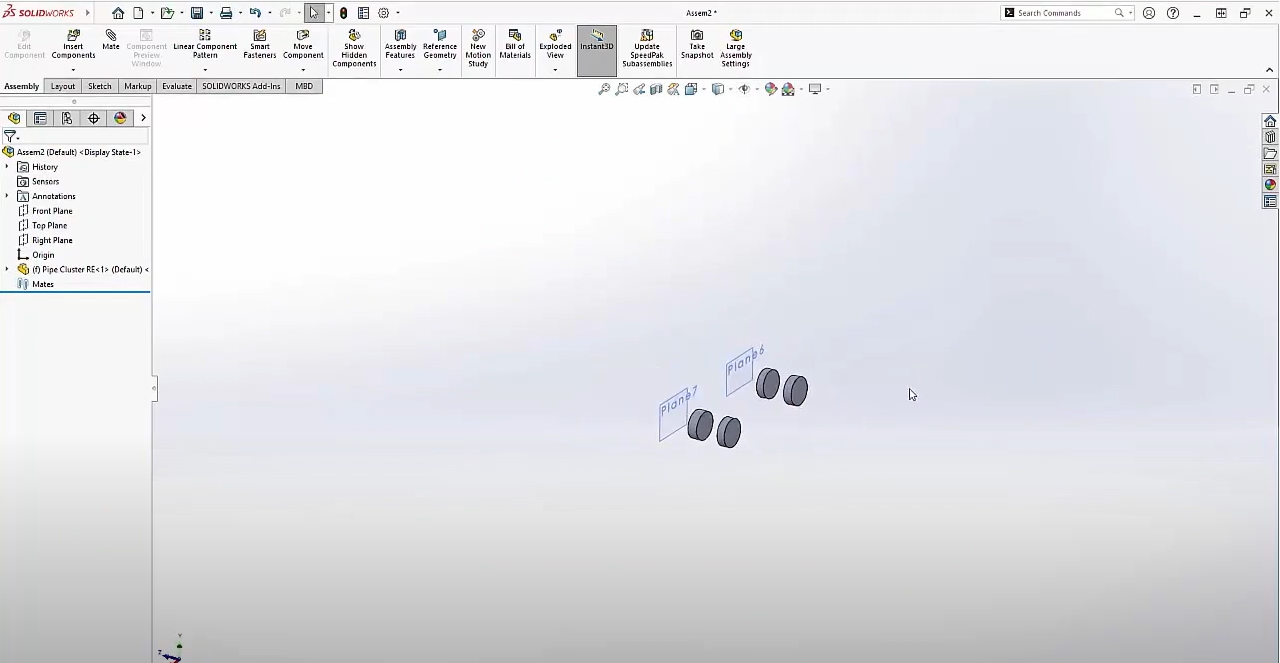 Cylinders and Planes shown in SOLIDWORKS

When opening a file in SOLIDWORKS, it is important to take the time to go into the STL import options to make sure the units match up and that the graphics body are brought in. Now I have a separate part file that shows this mesh as it was after I reoriented it, but it is opening the way SOLIDWORKS opens a mesh – as a graphics body. I will save this as a separate part file. And this, unlike the blue version of the mesh that Geomagic gave me, will show in an assembly. I can now save it as a part file. 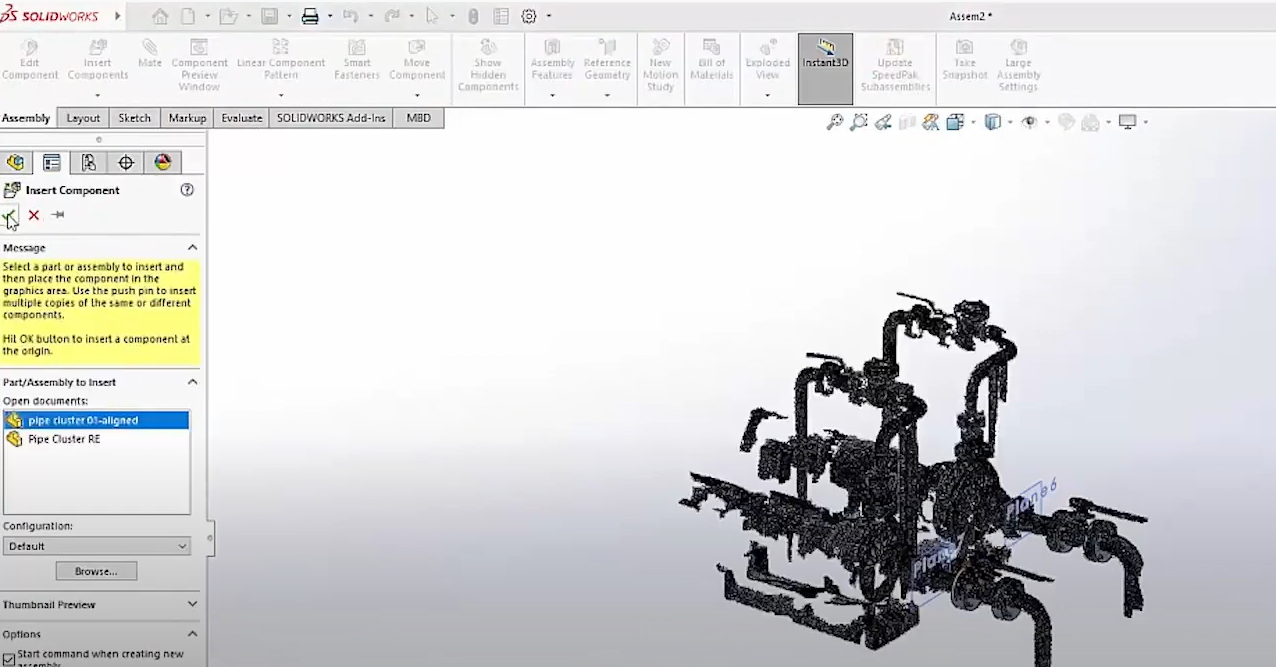 And very importantly, I am clicking the green checkmark. I am not using Mates to orient this; I want them both to be oriented as they are so that everything matches up and they come in fixed to the coordinate system and look good next to each other. I changed the appearance of the mesh so I don’t see the triangles, and now I can hand this over to any SOLIDWORKS user. They can visualize the scan and reference the cylinders and planes.

Learn more about 3D Scanning with training from Javelin