A 3D Solid Body can be scaled up or down using the SOLIDWORKS Scale feature. In this blog article other than introducing the Scale feature, a few scaling scenarios are also reviewed. The Scale Feature could be can under the Insert menu > Features > Scale or Insert menu > Molds > Scale. A 3D model can be scaled about its Centroid, the Origin, or a reference Coordinate System.

In most cases, the solid bodies are scaled uniformly about their centroid. Therefore, the “Uniform Scaling” option is checked off by default under the SOLIDWORKS Scale feature property manager. In this scenario, the center point of the model will be fixed and the rest of the model will scale up/down with respect to the defined value. 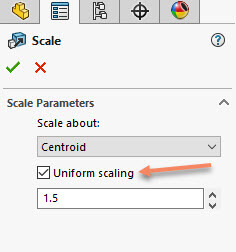 One other method of scaling is nonuniform scaling. In this method different scale values could be used for X, Y, or Z direction. SOLIDWORKS in this case uses only Cartesian Coordinate. For instance in the following scaling only in Y direction is shown. 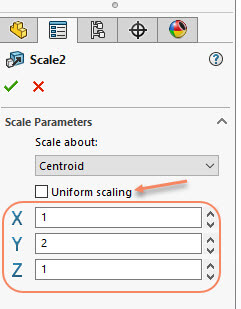 Scaling Only Along with Y Axis

Scaling Dimensions as well as the Solid Body

Here is a concerned raised by some users. When the SOLIDWORKS Scale feature is used, only the 3D solid body scales up or down. The dimension values stay as they were before applying the scale feature. In the following image, the dimensions of a solid body are shown before and after scaling. The dimensions values and also their position stays as they were. In case, you need to scale dimension values as well as the solid body, you need to take advantage of configurations and design table capabilities.

Scaled 3D Model Keeps the Dimension Values As Before

This method is very straight forward for uniform scaling but could be complicated for nonuniform scaling. In cases of more complex models, it could be near impossible and must be discussed case by case. Here is how we can scale dimension values at the same time as solid bodies:

Now we have two configurations. One has the default size, and the second one is a uniform scaled version of the default configuration. In this case not only the solid body is scaled up, all the dimensions match the new size of the model.

Posts related to 'Methods of Scaling Solid Bodies in SOLIDWORKS'