How to know when the mouse is acting up in SOLIDWORKS

Checkboxes ignoring your clicks?  Seeing strange behavior when trying to sketch something?  No, you’re not necessarily losing your mind (well, hopefully not today, at least).  And it’s likely not a Cylon computer virus trying to learn your system, either.  In fact, as we learn on Battlestar Galactica, “All of this has happened before, and all of this will happen again.”

The mishaps may seem random: maybe you were sketching several lines in succession in SOLIDWORKS using the click-move-click method (without dragging) and all of a sudden the next line doesn’t get automatically started, and so you have to manually start it.  Or, a spline may prematurely complete.  Maybe that checkbox you clicked in didn’t change state as it was supposed to, as if it completely ignored your click.  These are some of the most common symptoms.

If any of this sounds familiar, then it’s possible that the system was occasionally registering double-clicks from the mouse, even though you were attempting single-clicks.  Double-clicks are intended functionality in SOLIDWORKS that cause some sketch geometry like splines or connected lines to complete.  But when the mouse is faulty, and sends an unwanted double-click that your system registers, then these sketch attempts will sometimes complete prematurely.  And that checkbox you clicked in?  It will make that appear as though you never clicked it at all, but actually it could have changed state twice very rapidly.

These unwanted behaviors could be symptoms of a faulty mousing device, but there a simple confirmation test we can do in SOLIDWORKS: create a sketch and click your way through a few dozen lines using that click-move-click method.  If you suddenly stop getting that next automatic line, then it’s likely that the mouse is at fault.  Try switching to a different mouse and see if you can reproduce the behavior. 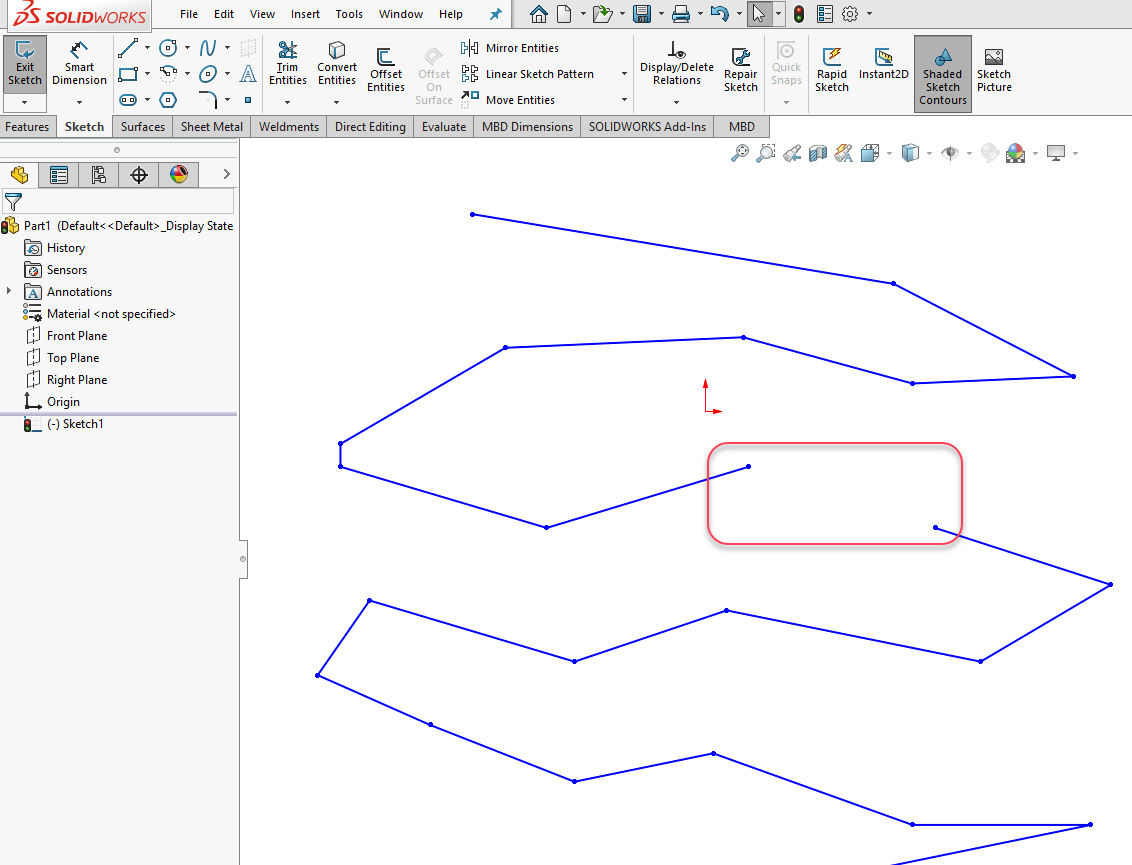 Single-clicking line endpoints to test for inadvertent double-clicks. A gap like this one will appear when a double-click is registered, causing termination of automatic next line.  Be careful not to click+drag as that too will end the continuity and give a false positive. Just click, move, click, move, etc.

Faulty mouse behavior can manifest in other sketch situations, such as circles appearing much smaller than intended, where the first click sets the center and the second click sets the radius.