Let’s look at a quite different topic today, PhotoView 360 video rendering. It’s not just creating animation and record it.  You can actually add photo rendering in the video. I am quite amazed SOLIDWORKS can do this now so the animation doesn’t look dull. However, if you are looking for real professional animation software, then you can now choose SOLIDWORKS Visualize Professional software.

Here is a video I created with SOLIDWORKS and PhotoView 360:

I added the sound separately using a simple video editing program. The video is only 30 sec but it took me a week to build the models, setup the appearances/textures, and create the animation.

Then it took me more than one day to render this video. Let’s look at some of the setup to create this video.

1. Camera path for the cruise ship:

The green spline in the graphical area from lower left corner to upper right corner is the path.  The globe is a sphere so the spline is a 3D spline on surface.  The two highlighted path mates are for the cruise boat to travel on the spline path.  The path mate motor (only available for motion analysis, not animation or basic motion) can be used to setup the speed of the boat. 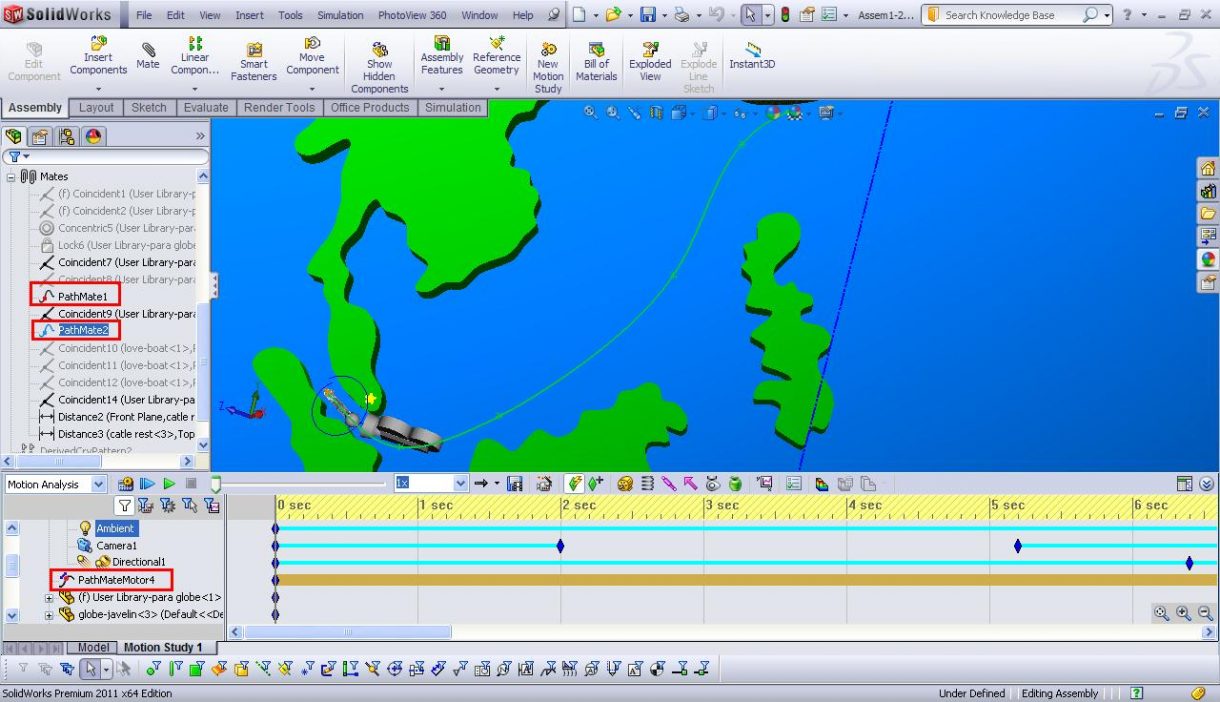 You can setup the lighting in two ways for PhotoView 360. 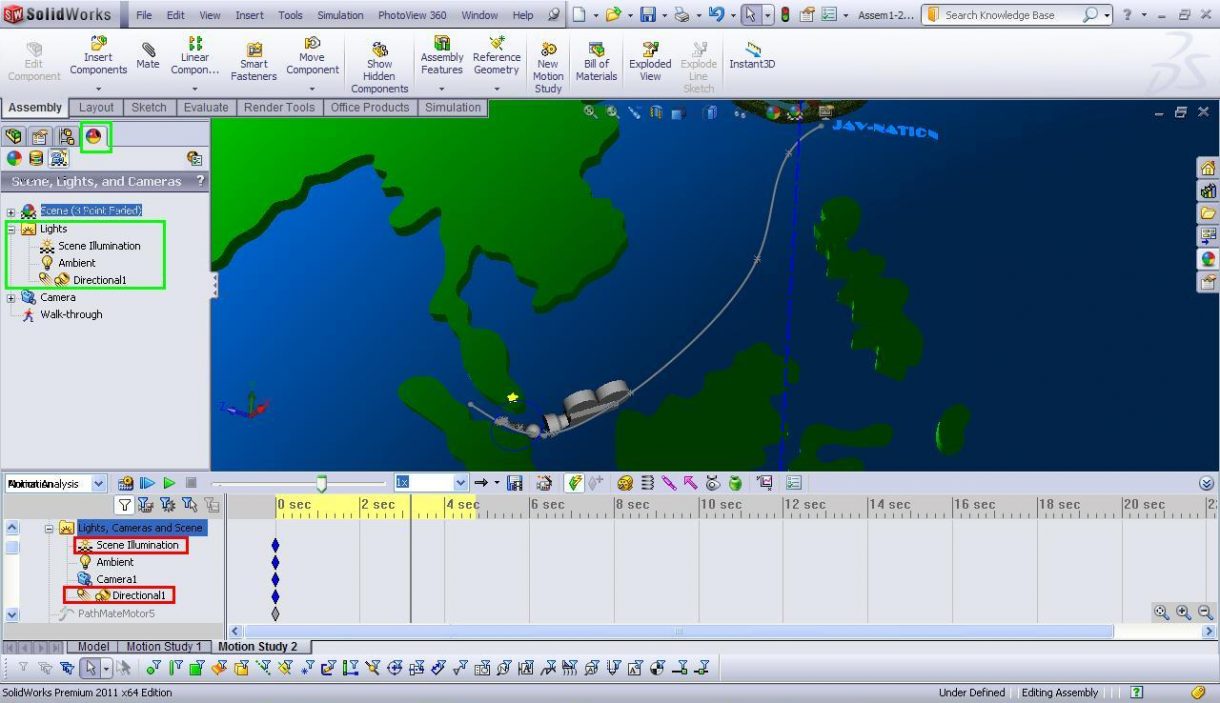 I find this is one of the most interesting and important features in the video rendering.  Without a camera, the view is dull and the original “perspective” setting is not a real perspective view, especially when there is large model (globe) and small model (boat) involved in one assembly. 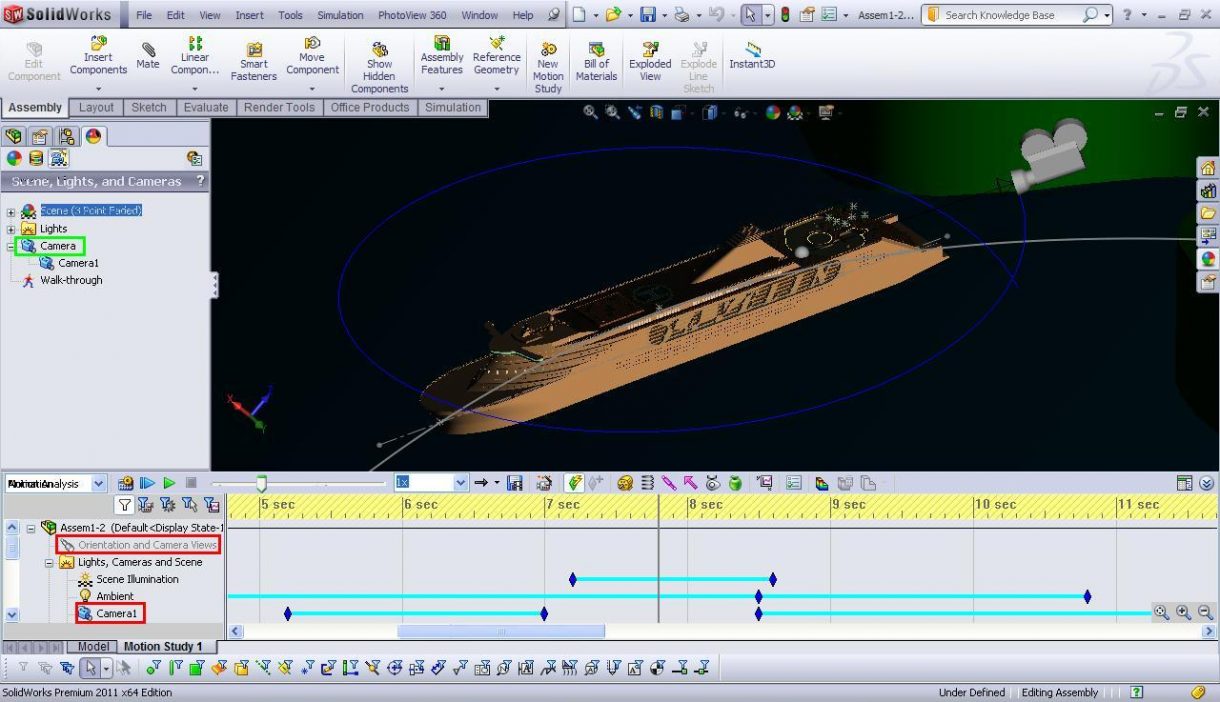 To create a camera, right click on the green highlighted item and add a camera.  Right click on the new camera in the tree to activate “camera view”.  In the motion manager, make sure you turn on the “disable playback of view keys” because the camera is not part of the view keys in the motion timeline.  You don’t want these two to fight over control. 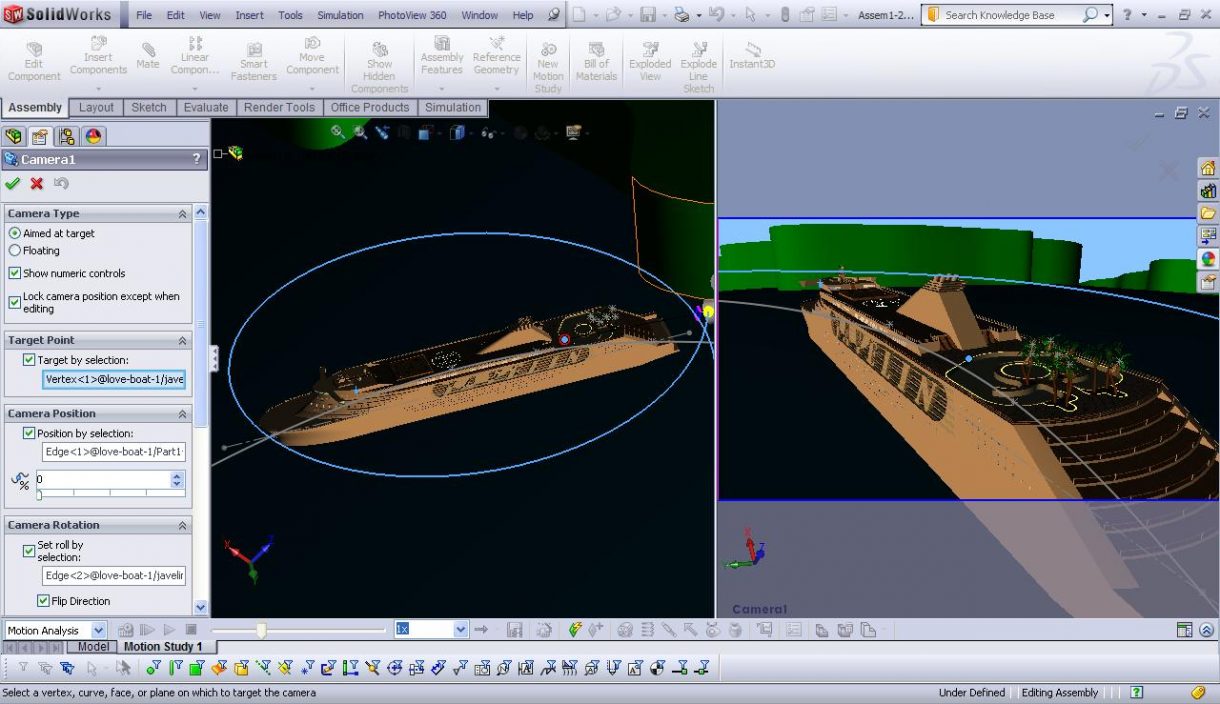 In the timeline, different positions of the camera is setup within the helix so in the video it looks like the camera is flying around the boat.  For camera rotation, if your entire model is straight up correctly (on top plane), you won’t have too much to worry about because zero degree roll is the straight up position of the camera.  In my case, the globe is round and the boat is not necessary at the top.  Also when it moves along the path, the “straight up” direction changes with respect to the global coordinate system.

To keep the camera straight up relative to an object, select a line/axis pointing straight up on the object.  Field of view, which is used to setup the camera view angles.  There are some preset options (35mm, 50mm, etc) which are just like DSLR lenses.  The last one is depth of field.  I have it disabled because I don’t have that much time to create this video.  Also the rendering speed will slow down because of the depth of field.  However this is still an interesting feature.  If you are not familiar with depth of field, it is simply setting up where you want to focus (like camera).  If the camera is focusing on a close object, the objects in the background far away will be blurry (out of focus). 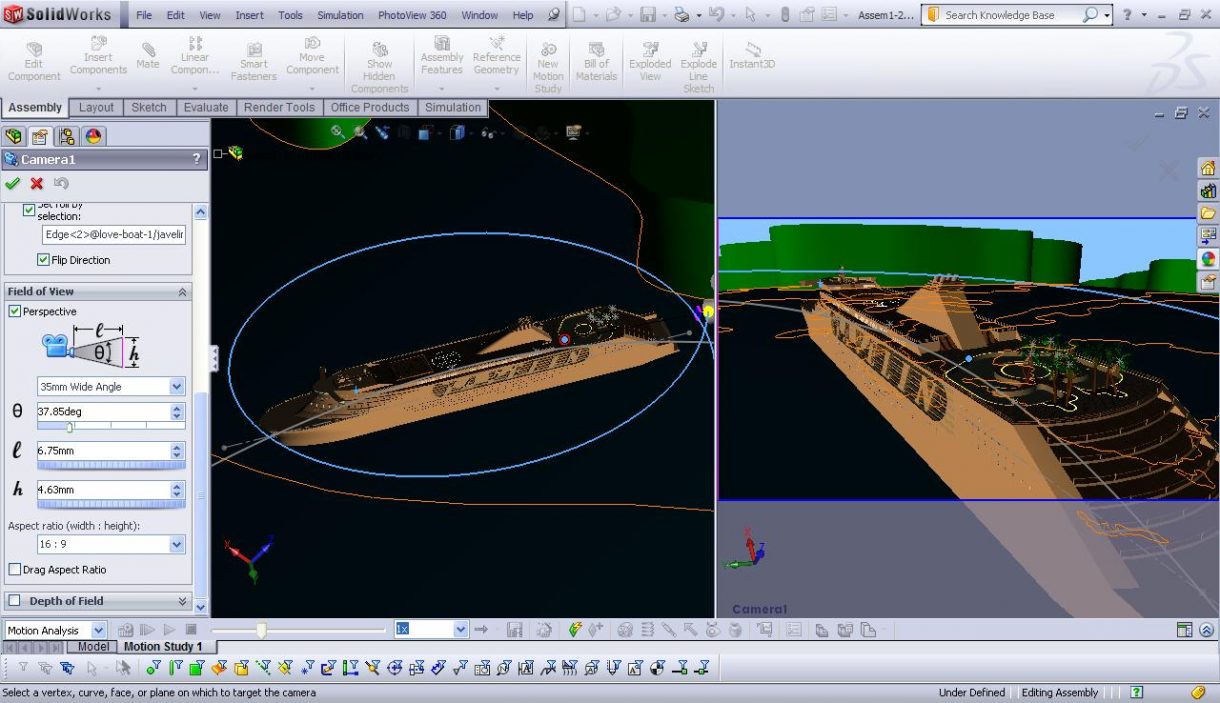 The limitation of the camera movement is that there is no true “smooth” movement when a key is added.  The interpolation mode choices are really limited if the camera moves in all different directions (enhancement request!).

The ship was created from scratch.  Which took me a lot of time.  All the windows on the ship have lights in the video because illumination can be setup on faces/features/bodies/…etc.  In the appearance property manager, go to “advanced” button and then you can add all different types of illumination properties.  If there is texture involved, you can change the size/rotation of the texture under “mapping”.  Remember to use preview from time to time to check what it’s going to look like in the video.  The appearance/texture may not look alike between SOLIDWORKS screen and PhotoView 360.

As for the Javelin and SOLIDWORKS logos, I use decals from PhotoView 360.  For the decals, illumination can be added as well (so in the video these logos are emitting light).  A limitation for the decals is that GIF is not supported, also change of decal on the same face in the animation is not supported.  I mention this limitation because I wanted to create a video within a video.  There is a workaround where you create multiple instances of the same object occupying the same space.  Put series of decals on them and show them in sequence.  This will take a lot of time so I just gave up. 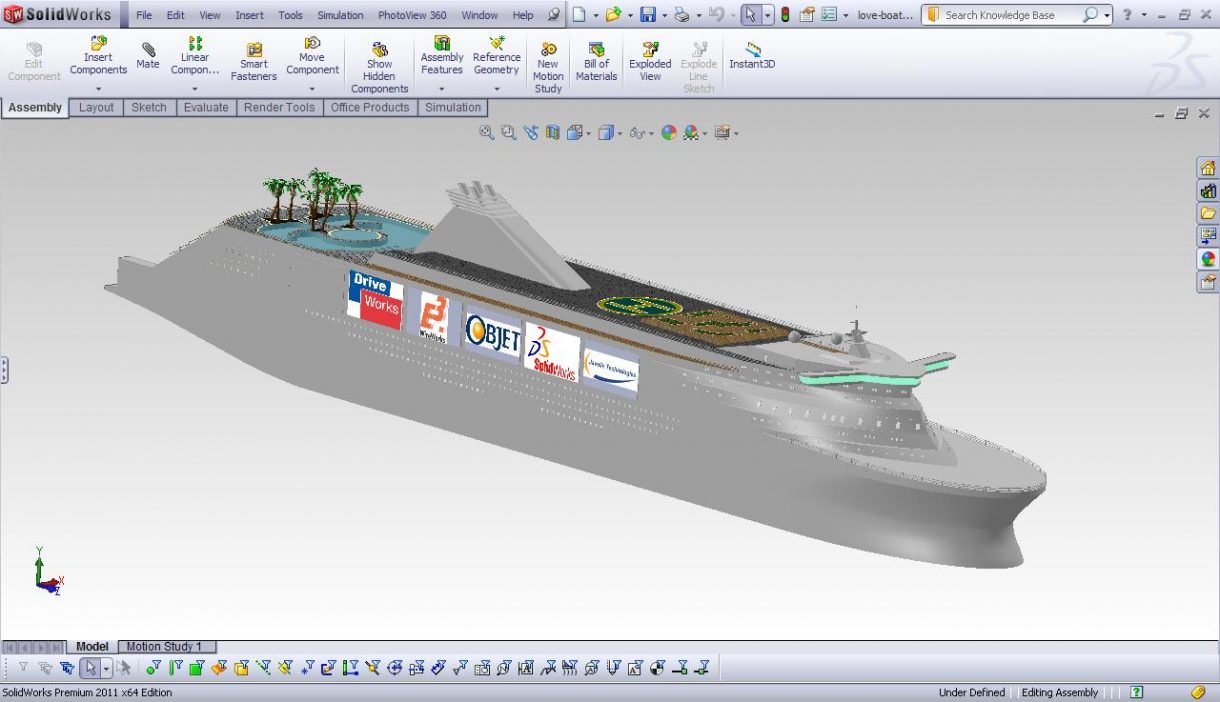 To create animation with PhotoView 360 rendering, change the highlighted option toPhotoView 360.  Setup the frame size, rate, and just sit back and relax because the rendering won’t finish anytime soon.  The render quality option can be found under “PhotoView 360” > “Options“.

In my video, I used only “good” quality, and it took me 30+ hrs to finish on a Core i7 machine rated at 3GHz.  PhotoView 360 supports multiple core processing, so the Core i7 CPU was at 100% utilized for 30+ hours.  If “max” is used, it may take 10 times longer to finish a 30 second video, but of course the quality will be amazing.  I hope that a future SOLIDWORKS release can take advantage of remote processing (or cloud computing) for PhotoView 360, so the master computer can use CPU power and RAM on other computers in the network to share the rendering. 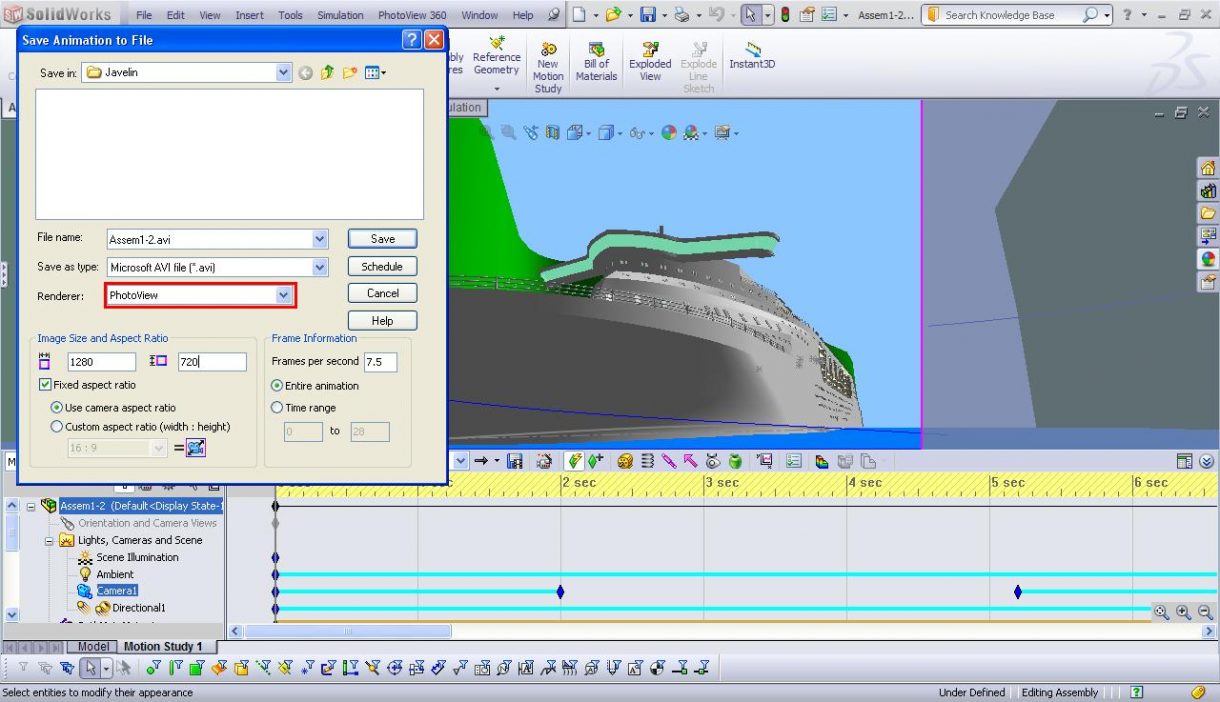 Save Animation to File

Hope you enjoyed this article!