How to find a Corrupt SOLIDWORKS Component

If you find that a SOLIDWORKS Component in your assembly or drawing has become corrupted, there are a couple of common causes for a file corruption:

Usually a user will receive an indication that the file is corrupt when they try to open it, but if the corrupted file is in an open top level document, such as an assembly or drawing, there may not be any indication of a corruption until the top-level document is saved.

When there is a corrupt file, a user will receive a message that indicates that the file cannot be opened or saved and to contact their SOLIDWORKS reseller. In a top level document, though, there is no indication whether it is the top-level document or a referenced document that is corrupt. So how do we find the corrupt file? This does require a process of elimination.

The first step is to open the top-level document and then to set Advanced from the Configuration pull-down as shown in the figure below: 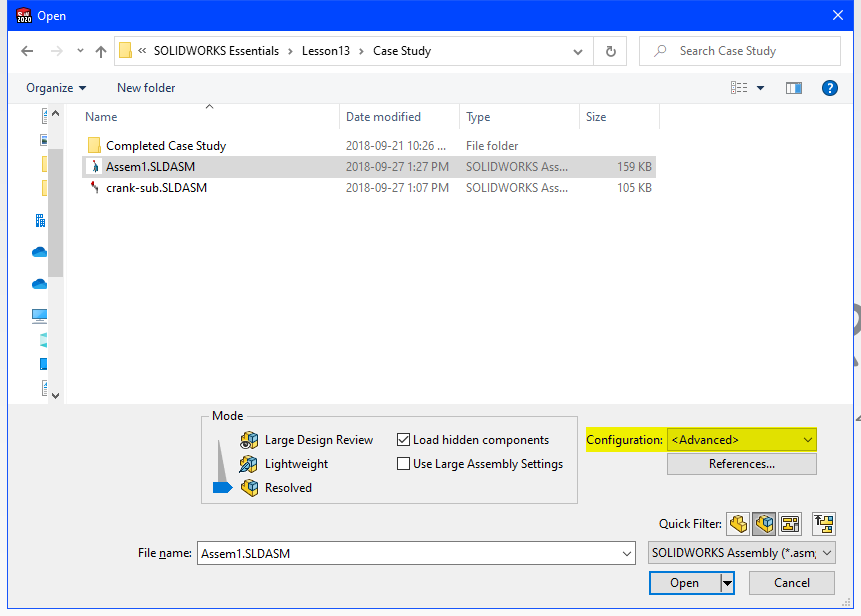 After clicking on Open, in the ensuing dialog box, select ‘New configuration showing assembly structure only’ and provide a name for the new configuration, i.e. Troubleshooting. This will suppress all components referenced in the assembly. 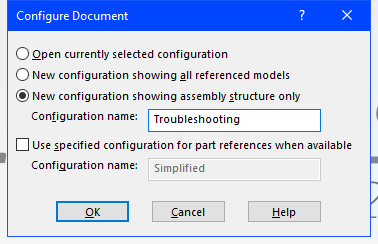 Once the assembly is open, starting from the top of the FeatureManager, unsuppress each component, one at a time, until you get a warning about not be able to load the component. This will be the corrupt file. If the issue is with a sub-assembly, you may need to open each sub-assembly, from the Open dialog box using Advanced mode for Configurations.

Now that you have identified the corrupt component, send it your SOLIDWORKS reseller, who will confirm that the component is corrupt and will then send it to DS SOLIDWORKS support, so that they can attempt to repair it.

For the most part, DS SOLIDWORKS support can repair corrupt files, but this can take some time and there is a chance that the file cannot be repaired. If a back-up or an earlier version of the file exists, using and/or updating this file may provide the fastest resolution. For simple parts then recreating part may be the fastest solution.

Posts related to 'How to find a Corrupt SOLIDWORKS Component'