Based on some of the UK’s most popular architectural styles, the miniature model houses were 3D printed with ultimate precision that could even make a hermit crab feel at home.

Artem Ltd. (Artem) has almost 30 years’ experience in the film and television industry creating props, effects and sets for global marketing campaigns. Simon Tayler, Artem’s owner, creative director and designer, recently worked with Zoopla, a property website in the UK, to create a unique television advertisement starring hermit crabs with their own mini model homes “shells.” Although Tayler and his team certainly had the industry know-how to complete the task, the job was a unique one. The production team wanted the shells to be realistic enough to fool real-life hermit crabs, and they only had one month to do it.

Highlighting Zoopla’s impressive portfolio of properties for sale or rent on a miniature scale meant each townhouse and country cottage had to be the size of a matchbox. This requirement made traditional hand model-making close to impossible, especially given the project’s time constraints. But by using 3D printing and the multi-material capabilities of the Connex3™, Tayler and his team were able to customize every tiny house design with ease and realistic details. “With 3D printing, we could work with minute details like individual tiles, or roof or brick texture that was only 30 mm across with no compromise on the precision,” Tayler said.

In addition to creating intricate details for the “shell” homes, Tayler and his team also knew the 3D printed shells had to be suitable alternatives to the real thing for the stars of the ad, the hermit crabs.

“We were keen to ensure the shells weren’t rejected, and wouldn’t harm the crabs,” Tayler said. To make certain the models replicated shells hermit crabs would actually want to call home, Tayler and his team obtained shells on-site in Costa Rica and created exact 3D scans with a laser scanner. With little time to take the design from scan to prototype to final model ready for filming, Tayler’s team knew 3D printing was the only viable option. “It was clear that it would have been impossible to achieve the level of realism required in such a short time frame with conventional, model-making,” Tayler said. “This was always a job for 3D printing.”

Thanks to the round-the-clock ability of their Connex3 3D Printer, Tayler and his team quickly produced prototypes of the shell houses, which were tested on site with a crab at the filming location in Costa Rica. The hermit crab took to the prototype shell, so the team converted the prototype into 30 high-quality models in Digital ABS material. 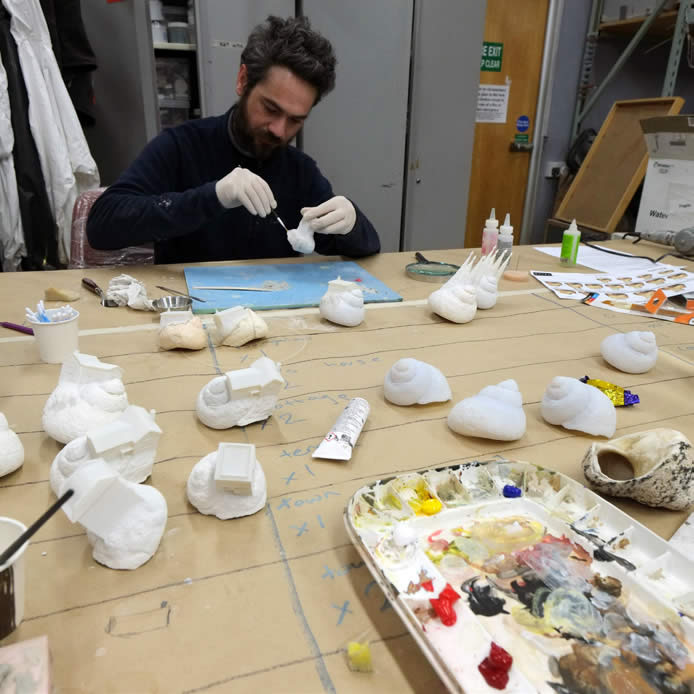 Each 3D printed shell was created from the scan of an actual shell and produced in Digital ABS material.

The shell home designs were based on some the U.K.’s most popular architectural styles, while also mirroring every curve, bump and nook of a hermit crab shell’s natural shape and internal structure. After each model home was 3D printed, the team added finishing touches by hand with paint.

By implementing Stratasys multi-material, PolyJet 3D printing capabilities, the team overcame the design restraints of traditional hand model-making and produced highly accurate, beautiful models within a strict time frame, 3D printing all 30 intricate models in just one week. The final advertisement starring Tayler’s 3D printed homes for hermit crabs is currently being broadcast in the U.K., and is just one part of Zoopla’s long-running, multi-series campaign.

“It was clear that it would have been impossible to achieve the level of realism required in such a short time frame with conventional, hand model-making. This was always a job for 3D printing.”