The hardware has arrived! Javelin’s Alin Vargatu awarded Reseller AE of the Year by the SOLIDWORKS User Group Network (SWUGN) 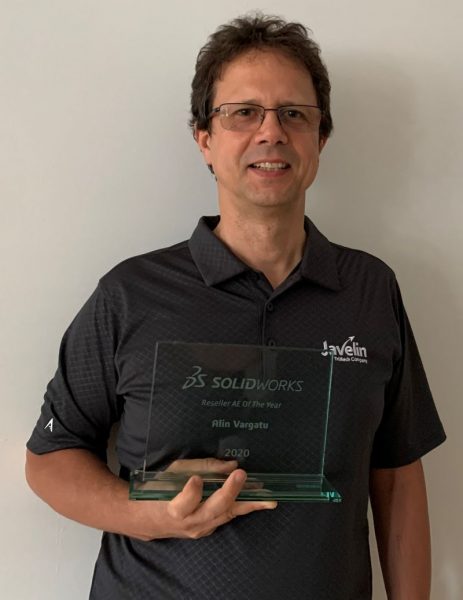 Dan Wagner, Manager, SOLIDWORKS User Group Network, was the first to inform Alin and thank him for his continued support and contributions to the development of the user group network. The announcement was made at the SWUGN summit on February 8, 2021.

A legend in the community

Alin is a SOLIDWORKS Elite Applications Engineer and an avid contributor to the SOLIDWORKS community. He presents regularly at conferences, summits, and user group meetings, while being very active on the SOLIDWORKS forum.

“The energy Alin devotes to the SOLIDWORKS community is second to none,” said Chris White, Engineering Manager for Quickmill Inc. and a prominent member of the user group community in Ontario, Canada.

“Alin is one of the major reasons for user groups being all across Canada. He is a legend in the community – everyone knows him in some capacity – and he is a strong voice communicating what users want, helping to drive future improvements to SOLIDWORKS.”

History has been made

The first Reseller AE of the Year was awarded to Alin for 2020. Members of the SWUGN voted and selected Alin for his willingness to help other users all over the world, often on his own time.

“It’s great to be recognized by industry peers,” Alin said. “I believe strongly in the value of networking and sharing knowledge throughout the SOLIDWORKS community. We all benefit from being able to make connections and work faster and smarter.”

The Power of SOLIDWORKS Toolbox and Standard Parts

Taking Engineering Drawings to the next level with GD&T