It’s an awe-inspiring and irregular shape, towering sharply over the tundra landscape, reaching up into the sunlight. It’s an iceberg, but its home is not the Arctic; it lives at the Canadian Museum of Nature in Ottawa, Ontario.

Made of stainless steel, and perhaps the most striking new art installation in the city, this 13-metre iceberg does exactly as it was meant to do – it transports onlookers to a part of Canada they may never be able to visit in person. Official unveiling of the iceberg sculpture is on June 17, 2016, at the museum in Ottawa.

Its artist is Bill Lishman, known by many as “Father Goose” because of his amazing adventures leading birds through the air while flying his aircraft. At Javelin Technologies, he is likely better known for his wild yet practical ideas, as he and business partner and friend Tom Sommerville use SOLIDWORKS® to bring those ideas to reality.

It’s been more than four years since Bill started planning the iceberg sculpture. On June 17, 2016, it will be officially unveiled in a ceremony at the museum, where Bill’s sculpture is the highlight of a massive garden redevelopment project that shows the many landscapes of Canada.

From cardboard mockup to 13-metre sculpture

The iceberg sculpture got its start as a small cardboard mockup that Bill carried in to Tom’s shop. “I know when I have to go to the expert,” Bill says. “Tom is the SOLIDWORKS guy. Technically, he always has it all figured out.”

Tom has been working with SOLIDWORKS since 1997, and Javelin has been his SOLIDWORKS partner almost since the beginning of Javelin itself. Bill says he was working in 2D CAD when Tom introduced him to SOLIDWORKS for 3D design. 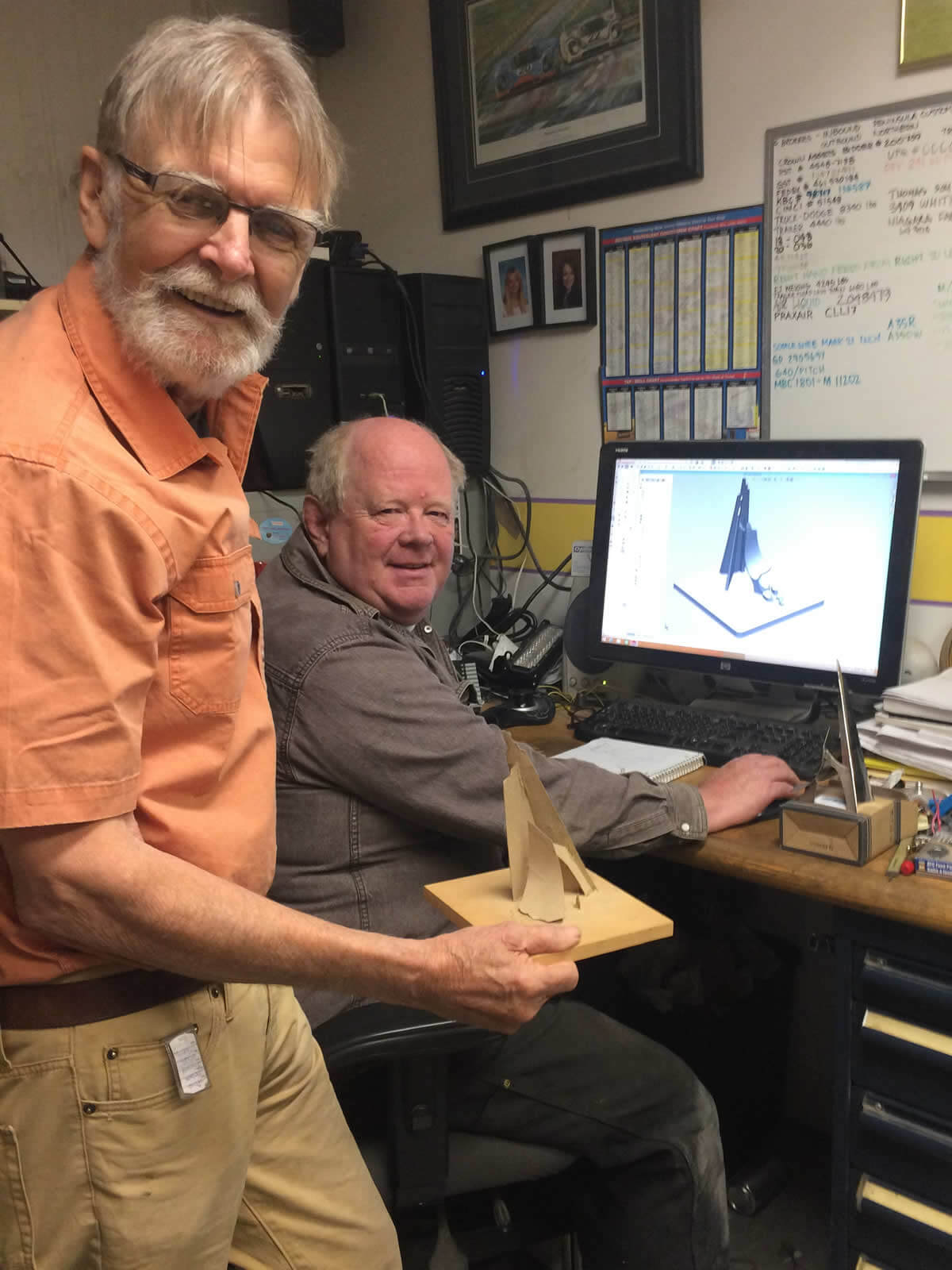 Bill and Tom with their Iceberg model in SOLIDWORKS

“I remember thinking that sculptors could do amazing things with this,” he says. Bill dabbles a bit in the software, but relies on Tom for his expertise. While Bill does the dreaming, Tom creates the design.

“Bill is an idea factory,” Tom says. “If he shows up with two coffees, one in each hand, I know it’s a design day. My job is to get the shapes out of Bill’s brain and into a design that can actually be fabricated.”

SOLIDWORKS helps Tom play his role as liaison between artist and fabricator. He says artists use soft thinking, while the builder needs hard and fast thinking. What are the individual components? What are the machining requirements?

“Bill has to compromise sometimes,” Tom says. “He’ll say, ‘well, I don’t like it as much, but it will do.’ His original iceberg was full of compound curves and very labour intensive. We eliminated those to ensure someone could build this thing. We left everything monoplane with no complex shapes.”

He says that’s part of the beauty of SOLIDWORKS. 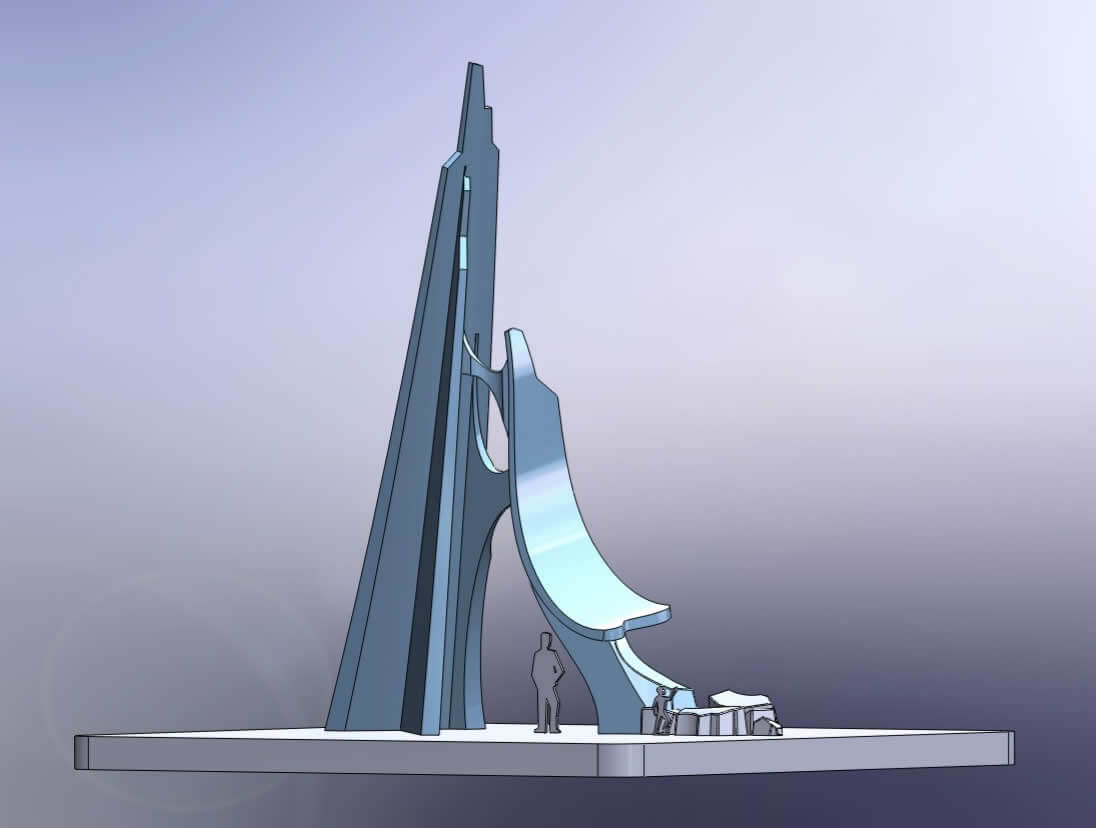 “The main reason we used SOLIDWORKS is the ease of grooming parts. Bill was forever wanting to adjust this or that. You never lose anything. You can go back and change something, even start again. It’s hard to reverse your work when it’s already in stainless steel.”

He laughs and adds, “Not that you’d want to go back very far with the iceberg design. You should see the design tree for that project – it’s so scary. And in reality it was probably 10 times bigger than that. It’s just like the tip of the iceberg.” 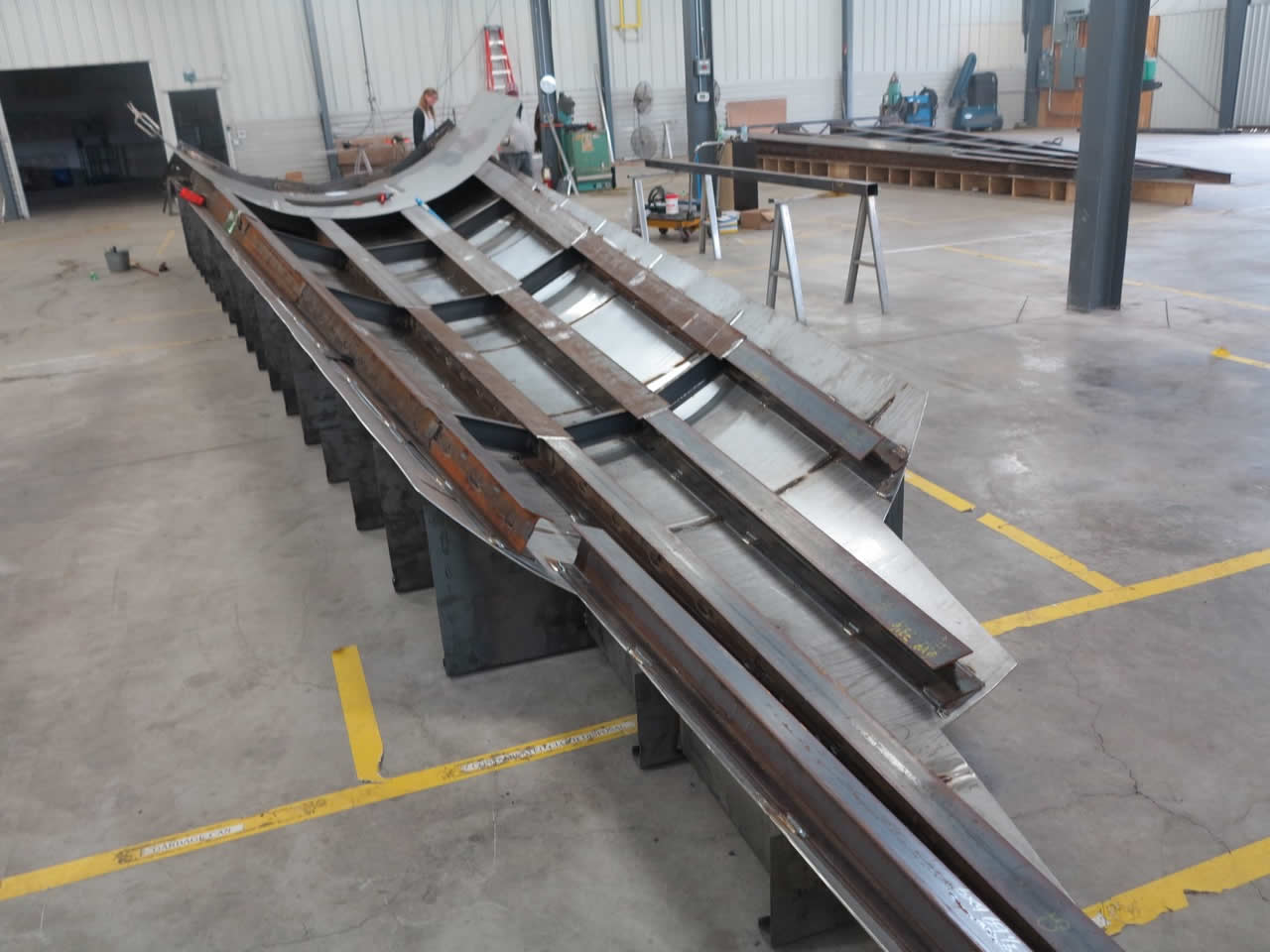 The two agree that using SOLIDWORKS over 2D design is like the difference between modelling in clay and painting.

“A sculpture is not seen from only one point of view, it’s seen from every angle. You can walk around it, stand under it, or fly over it.”

Bill told Tom he wanted a 40-foot high sculpture that would appear 70 feet tall when you stood underneath it. Tom accomplished this using the extrusion angle, to trick the viewer into thinking the sculpture is much taller than it actually is. 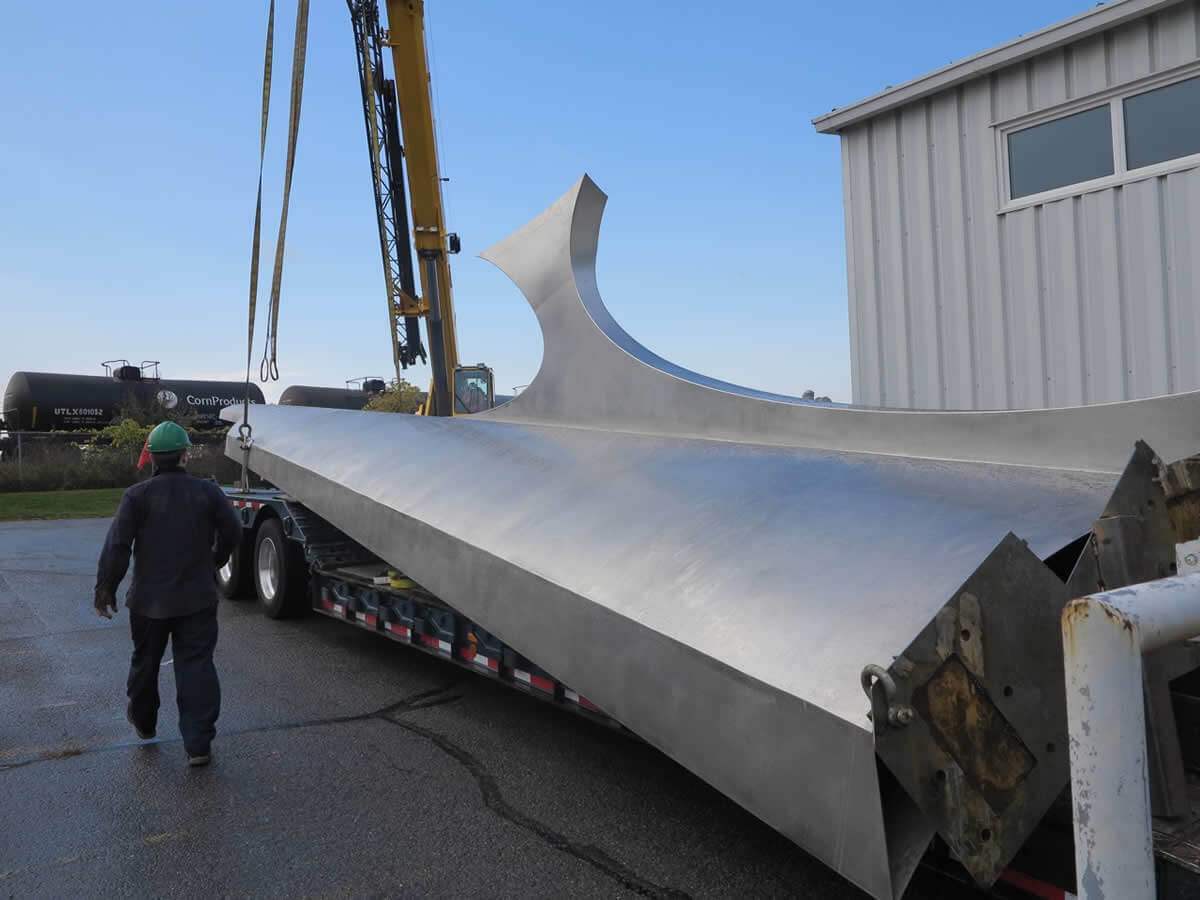 Pure Ingenuity of Kingston, ON fabricated the enormous sculpture. They refined Tom’s SOLIDWORKS design, created the necessary internal structures to reinforce the largest sections, developed cutting patterns, and ultimately figured out how to build, transport, and assemble the pieces (in a week-long choreographed installation). Five large components were anchored to the footings, then assembled and welded together. Smaller pieces representing ice chunks were installed around the base. Surrounding the sculpture, landscapers laid down granite and limestone rocks and Arctic plants. 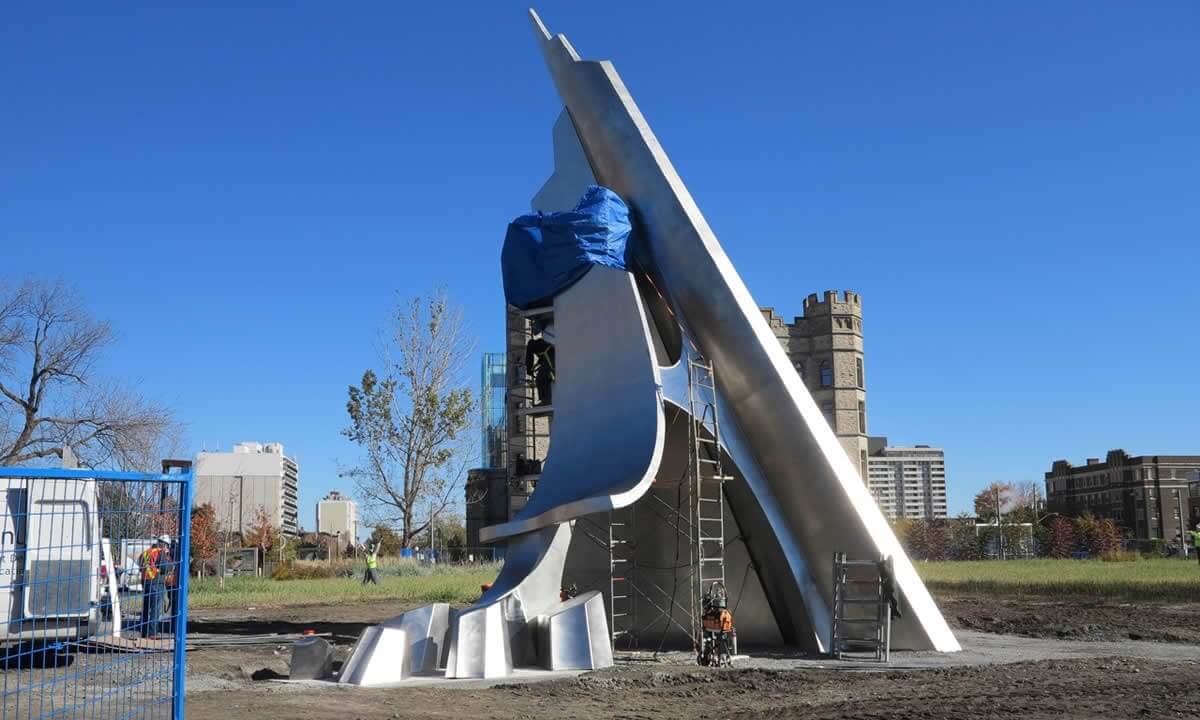 A vision of Canada’s north

Bill has travelled to the Arctic and Antarctic and been captivated by the colossal and varied shapes of the icebergs he’s been close to and photographed. His hope is that visitors to the museum may also have the feeling of experiencing the landscape of the Canadian north. Thanks to his vision, SOLIDWORKS, and a talented friend, people in Ottawa will have that chance.

“I have said many times that I am Bill’s hands,” Tom says. “He’ll say, ‘make that taller, stretch that out, make that skinnier.’ You can feel the process working.” 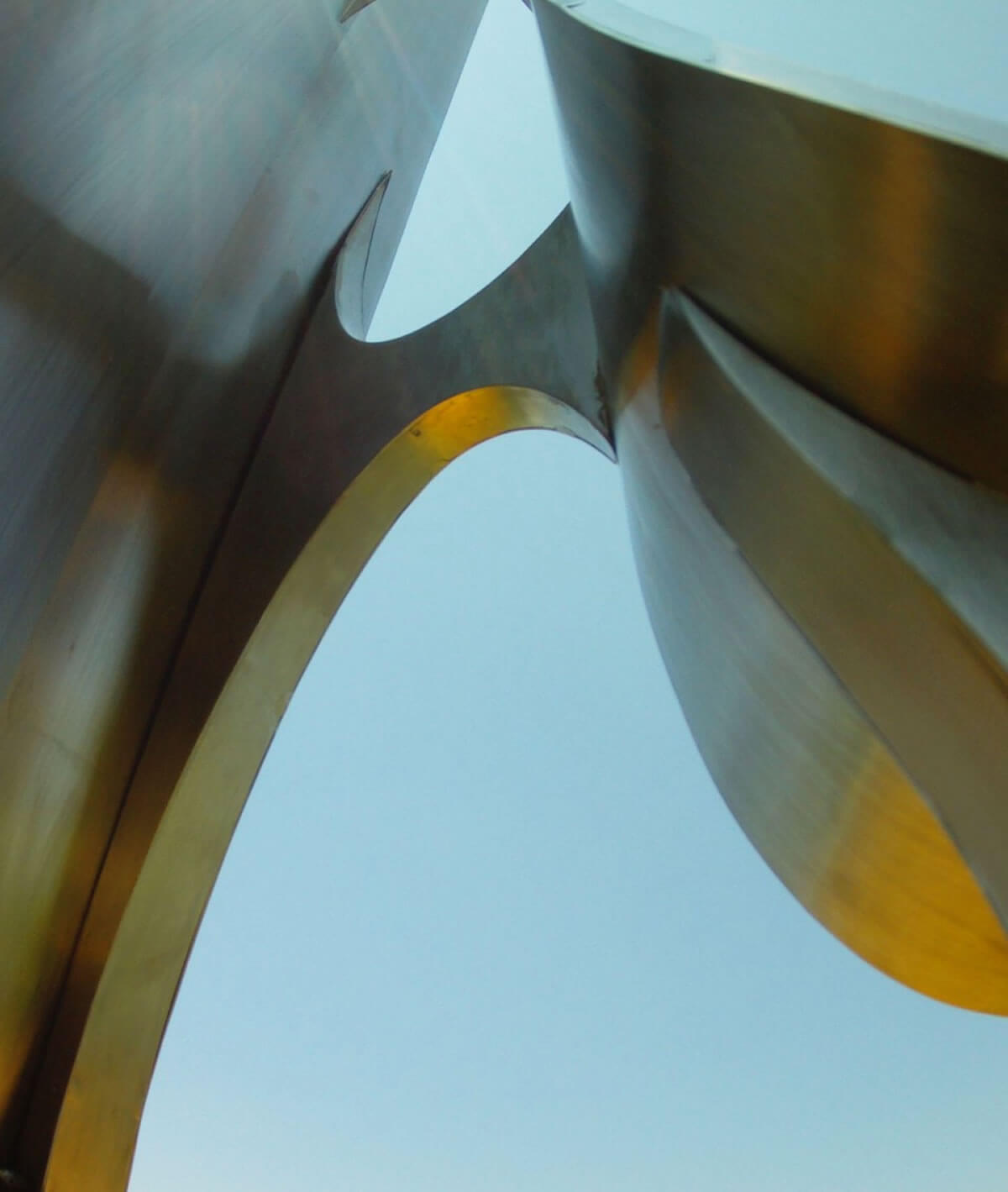 Inside the iceberg sculpture

He also says that before SOLIDWORKS, getting geometry on to the screen and manipulating it was very tedious, and that CAD operators resisted making changes.

“SOLIDWORKS has made editing a part so simple that it is almost painless to make many iterations for the client to choose from. And there are so many software engineers continually working on it that there seems to be no end to what it can do.”

SOLIDWORKS Manage Mondays: Bring processes together while teams are apart

Moving from AutoCAD to SOLIDWORKS