Space is an unforgiving place. Temperature extremes, radiation, and orbital debris stand ready to cause havoc with any ill-prepared spacecraft. Ever since humans first ventured beyond Earth’s protective atmosphere, the vehicles used to get there and back have pushed the limits of engineering and material science. It’s a challenge the team at Sierra Space faces every day, but armed with the right technology, it’s one the company is well prepared to meet.

“Bringing 3D printing in-house opened the eyes of a lot of the designers to utilize and take advantage of the technology, using it for different types of things.”

The Right Solution for Unique Parts

Sierra Space builds the Dream Chaser spaceplane, a multi-mission utility vehicle for transporting cargo into low-Earth orbit destinations like the International Space Station. Being a reusable spacecraft means the Dream Chaser has to endure the intense heat of reentry to Earth’s atmosphere. Surviving this critical part of spaceflight requires a thermal protection system (TPS). The TPS forms a protective layer on the outside of the spacecraft, comprised of 2000 heat-resistant tiles, similar to what cloaked the space shuttle.

The tiles are adhered to the skin of the Dream Chaser using “chucks” – tools that correctly position the tiles and also verify a proper bond during pull testing. Manufacturing these chucks the traditional way involves casting them from resin using the thermal tiles as a mold. But because a matching chuck is required for each tile, this becomes a time- and labor-intensive process.

Looking for a better solution, the Sierra Space manufacturing team opted to 3D print the chucks instead of casting them, to capitalize on several of the technology’s benefits. For starters, 3D printing offers hands-off production, alleviating the time-consuming resin casting process for each chuck. 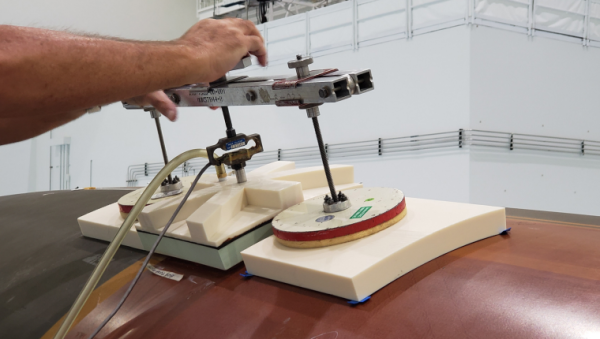 “When you look at the time it takes to do all of that manual casting and do a trade study on the time vs. the cost for 3D printing, it’s just a slam-dunk to automate this process,” says Bob Gjestvang, Sierra Space’s lead TPS manufacturing engineer. In fact, the labor savings alone essentially paid for the acquisition of the printer, a Stratasys F900™.

But beyond saving the time to physically cast each chuck, Sierra Space leveraged the digital nature of 3D printing to automate the development of the chuck design. Using the tile CAD models, engineers autogenerated the chuck CAD models, saving development time for the individual chuck designs. “If you were going by an old manual process for CAD design, there would have been tens of thousands of hours involved in manufacturing those chucks. The labor savings alone has been impactful for the program,” says Gjestvang. 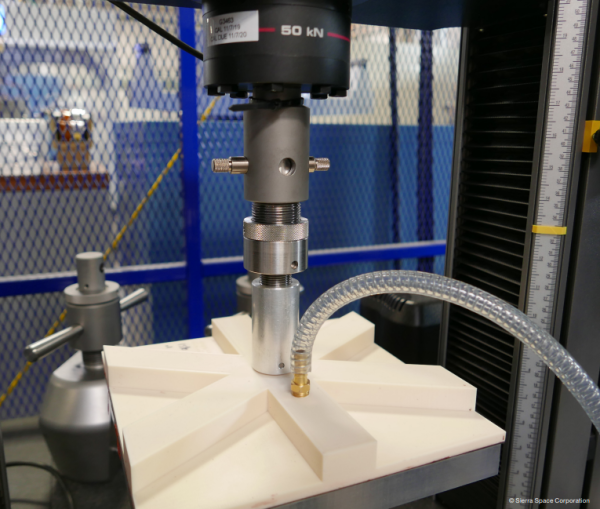 When it just has to be right

Perhaps even more significant, however, is the precision that 3D printing brings to the manufacturing process, a critical factor for safe spaceflight. As Gjestvang puts it, “You can’t pull this vehicle over to the side of the road if something doesn’t work.” It means Sierra Space must get things right the first time. TPS is a critical flight system with no redundancy. It has to withstand reentry heating, so it’s essential the Sierra Space team gets it right during design, build and test, before the first flight.

According to Gjestvang, 3D printing helps achieve that in a number of ways. “It’s time- and cost-effective, which allows our personnel to focus on other issues instead of performing repetitive tasks. Also, 3D printing allows us to bring additional methods and tools to bear with more precision than previously available.” Examples include simulator parts printed to test-fit their location or precision tooling to align components, all of which can be produced quickly and effectively with 3D printing. “These types of advantages raise the bar of quality and ensure we get things right,” says Gjestvang. 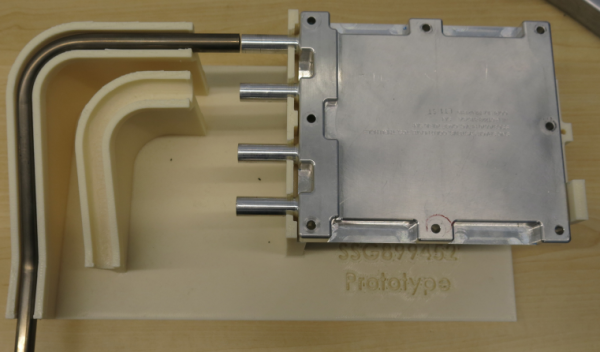 Not satisfied with just avoiding the laborious hand casting process, Sierra Space engineers worked on perfecting the chuck’s initial design, looking for additional savings. Optimizing the strength geometry paid off by reducing material usage, but it also cut the original print time projection by 75%. This opened up printer availability and it didn’t take long before other engineers were taking advantage of the opportunity.

“Bringing 3D printing in-house opened the eyes of a lot of the designers to utilize and take advantage of the technology, using it for different types of things,” says Gjestvang. In his estimation, about 80% of the 3D printing utilization is now made up of other projects, outside of chuck production. They include various types of tooling, mock-ups, and simulators, the latter being full-sized parts used for fit checks or testing prior to final design release. “Once you have the technology and engineers have access to it, they find ways to use that technology to solve problems in ways different than they would have before,” Gjestvang adds.

Like other aerospace manufacturers that experience the advantages of 3D printing with FDM® technology, for Sierra Space, there’s no going back. Beyond the production of thermal tile chucks and other forms of tooling, Gjestvang sees qualifying ULTEM™ material for flight parts as the next logical application of the technology. Besides being the best solution for efficiently making tile chucks, additive manufacturing gives Sierra Space the capability to do things right the first time. Because in space, there’s not much room for error.

FDM Production on a bigger scale!