The University of Notre Dame’s IDEA Center is a crucible for entrepreneurial activity that brings new innovations to market. Within the IDEA Center is the Innovation Lab, providing the university’s budding entrepreneurs the tools to turn ideas into products, and products into new businesses.

Matthew Leevy serves as the Innovation Lab’s director and views 3D printing as an essential element for incubating concepts into new startups. 3D printing is not a new technology at Notre Dame. The University has employed 3D printers for 20 years for the purposes of education, innovation and student club activity. Although some printers are distributed around the campus, the Innovation Lab provides an important resource center for 3D printing activity.

Serving faculty and the student body puts a steady demand on the Lab’s 3D printing resources and Leevy’s team can’t afford to waste time with equipment that’s unreliable. Unfortunately, it has firsthand experience with the deficiencies of undependable printers promoted as industrial grade but don’t live up to that aspirational standard.

“What we’ve realized in providing 3D printing services is that while consumer-grade printers are very attractive to purchase because of the low price, you end up spending a lot of time on maintenance, servicing and troubleshooting, just to keep them operating.”
Matthew Leevy University of Notre Dame, Innovation Lab Director

Typically, it’s the low price of these printers that attracts schools and businesses to buy them. But the lure of making innovative products with an inexpensive printer is quickly dampened by the reality of poor results. When asked about the issues these printers exhibit, Leevy’s response is blunt: “What isn’t the issue? You’ve always got extruders that get plugged or you have to troubleshoot the bed and get it level. And when you’re using a printer that doesn’t offer soluble support, you’re going to have more failed prints and the part quality is lower.”

Leevy continues, “What we’ve realized in providing 3D printing services is that while consumer-grade printers are very attractive to purchase because of the low price, you end up spending a lot of time on maintenance, servicing and troubleshooting, just to keep them operating.”

Compounding the problem is the need to support classes with up to 30 students trying to make multiple parts over the semester. “That’s a significant load on some of these consumer-grade machines,” says Leevy. And when prints don’t turn out like they should, it results in frustration and additional work. “You have to spend more time troubleshooting and trying to get it to come out right the next time. Then you’ve wasted the plastic, wasted the machine time and wasted the human time trying to figure out what went wrong,” says Leevy.

The Innovation Lab’s role isn’t to teach students how to 3D print – rather, its 3D printers provide the means to bring their ideas to life. They need to work reliably, as any dependable tool should. To get that kind of performance, the Lab purchased professional F120™ and F370™ 3D printers from Stratasys, which have sufficiently met the needs of Leevy and his staff. “The whole F Series printers are just workhorses,” says Leevy. “They work so reliably.”

For Leevy, justifying the price difference between professional printers and lower-priced consumer grade machines is easy because he knows the added costs associated with troubleshooting less capable printers. “Reliability means less staff input. If you have to spend two hours a week troubleshooting a machine, that’s 100 hours per year. If that time is worth $50 per hour that could be spent on billable or other projects, that’s $5000.

So over the course of one year, the machine has paid for itself,” says Leevy. “Staff time is money, so if I have a staff member that spends an entire day with tech support trying to fix machines that consistently don’t work, it’s a real drain on resources. It’s just not worth it – life is too short,” he adds.

The reliability and consistent performance of the Lab’s F123 Series™ printers enticed Leevy to pursue the Stratasys F770™. This large-format printer leverages the benefits of FDM® technology while offering over 13 cubic feet of build volume. Now the Lab has printers sized to address the varied needs of the students. According to Leevy, the F770 caps a “pyramid” model where multiple F120 printers bear the primary printing load without much staff input. Stepping up in size is the F370, providing the capability for larger parts. Topping the pyramid is the F770, filling the need for even larger parts or large batches of smaller parts. “I envision a world where we end up having no fewer than 20 F120s on campus, probably two or three F370s and then one F770 that’s really the capstone printer for people who want to do super-big projects,” says Leevy. 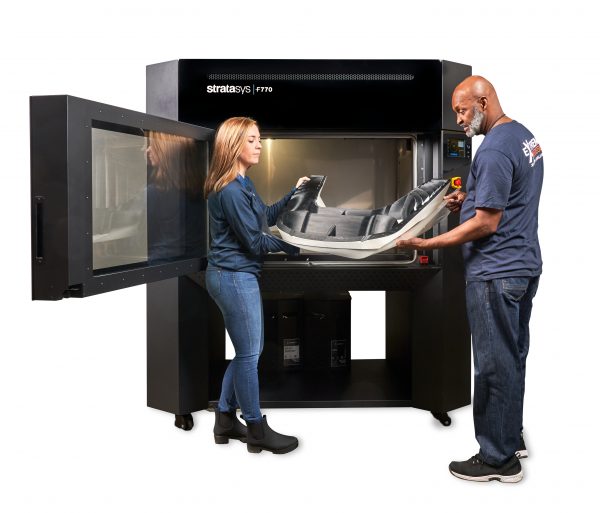 While the small to mid-sized printers do a good job handling most of the demand, Leevy admits that the F770 is somewhat of a game-changer. As an example of its versatility, Leevy relates the story of a student who needed to produce 150 skateboard parts to support a small business venture. That’s where the F770 provided the key. “We just set it up for a weekend run and made 150 parts,” says Leevy. “You don’t have to do three or more changeouts on another machine. You just run it, come back in a couple of days and the parts are done.”

The F770 also has also alleviated another problem – having to section large parts. Previously, students had to spend extra design time to determine the best way to break large parts into multiple pieces that could be mechanically fastened together. Not only does this demand more time, it doesn’t necessarily result in an optimal design. Now with the F770, students can build large parts in one print job, avoiding a segmented design. “It’s been so convenient to not worry about seaming a product or putting in additional design time. You’re saving the time of trying to sort out how you’ll build it in multiple parts,” says Leevy.

The University of Notre Dame’s IDEA Center mission is, in Leevy’s words, “to unlock discovery, fuel genius and advance the common good.” The right 3D printers help the IDEA Center’s Innovation Lab focus on achieving that goal, without the distraction and wasted resources associated with less capable printers. And since the IDEA Center helped launch 30 new startup businesses in 2020, a year that saw many businesses close due to a global pandemic, it’s clear that the “idea” is working.

The F770 is designed with size in mind. Print one or several large parts or take advantage of the printer’s generous capacity to make multiple parts for maximum productivity. The Stratasys F770™ 3D printer makes printing large, complex parts affordable, reliable and easy.