An orthopedic specialist brought a unique kind of design thinking, and the latest in 3D scanning and printing, to create a thought-controlled bionic arm for a patient.

Paul Teupel was born without most of his left arm. He has had many prosthetic arms over the years, starting at the age of 3. Then at the age of 12, Paul received his first myoelectric prosthesis (with an Ottobock hand). It was a milestone for him, as it was the first time he could grip and hold things using his left arm. Even so, this new arm allowed him to bend his elbow only 30 degrees, which was an improvement, but still left much to be desired.

Paul became a patient of Sanitätshaus Klinz of Bernburg, Germany, in the early 1990s, not long after the reunification of Germany, and has been working with the firm’s orthopedic technician Carsten Suhle since 1997. One day in the spring of 2017, with a plan to create an innovative new arm as part of his Master’s thesis, he told Paul not to get used to the prosthetic arm he had, “We’re going to make one for you that will be better than anything you’ve ever tried or even seen, what do you say?” Paul enthusiastically agreed, and over the course of the next 5 months, while working closely with Carsten, Paul’s bionic arm came to life.

Bringing together a synergy of his years of expertise in orthopedics, his own kind of design thinking, and the latest in 3D scanning and printing, it was only a short while before he had built his first prototype for Paul.

Carsten understood that they needed the guidance of trusted experts in the field for help in choosing the right scanners, so they turned to a certified reseller, whose experienced technicians and consultants introduced them to Artec’s professional handheld 3D scanners Eva and Space Spider and provided them with training on both.

Artec Eva is a professional colour 3D scanner that uses safe structured white light. Lightweight and comfortable to use, Eva is ideal for digitally capturing medium-sized objects, such as arms, legs, and the human body. Boasting a point accuracy of up to .1 mm, Eva is one of most popular 3D scanners across a variety of industries, from healthcare to industrial design and science. 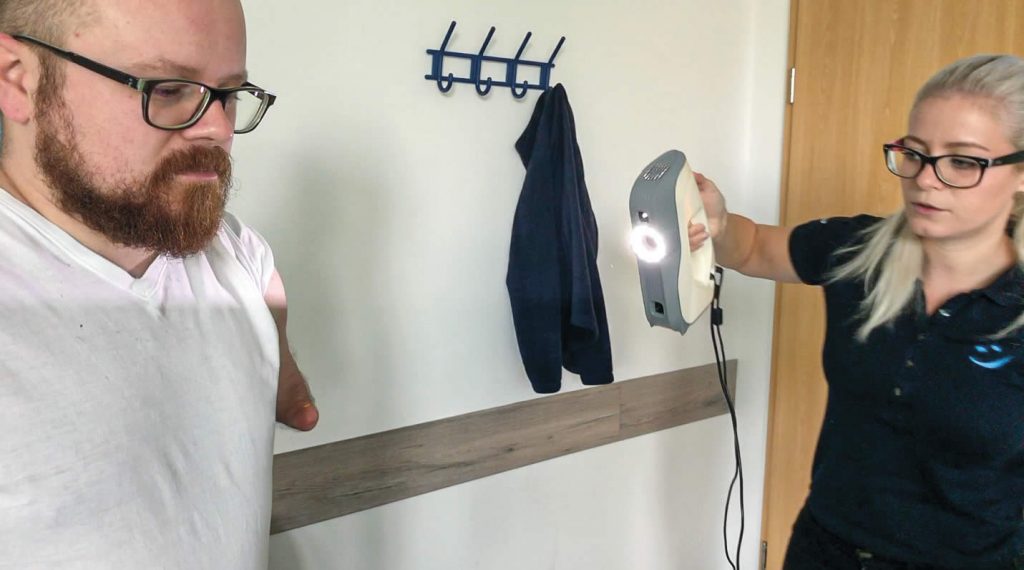 A handheld colour 3D structured light scanner with an extraordinary point accuracy of up to .05mm, Artec Space Spider excels at scanning small objects quickly, and is easy to learn and use, with a long-standing track record of perfectly scanning fingers, hands, ears, faces, and more. During the digital capture process, scanning takes place directly within the industry-acclaimed Artec Studio software in real time. Both Eva and Space Spider are fluidly integrated with Geomagic Freeform modelling software.

Altogether, it took about 10 months from first prototype until the final arm was ready for fitting. The hand (bebionic) was purchased from Ottobock, while the prosthesis itself was entirely created by Carsten, designed in Geomagic Freeform, and 3D printed out of PA2200 plastic.

There is also blue silicone padding used as an interface between the prosthesis and Paul’s residual limb. Inside the body of the prosthesis are cables and wires leading to sensors from Paul’s skin that use muscle electricity (myoelectricity) to move the new arm and hand. So, simply by thinking about a specific movement, the muscles that would normally move the arm in that way are activated, the sensors pick up the electricity via the skin sensors, and the prosthesis moves and functions as Paul has intended.

“When I first began to look at 3D scanners, I imagined that we could just make up for any shortcomings in the scanner by becoming more skilled with the scan processing. But that didn’t work. When you start out with flawed data, you can spend hours and hours with it, and it will never be perfect.”