Lucas becomes a Certified SOLIDWORKS Expert (CSWE) at the age of 15!

Using SOLIDWORKS is new for Lucas, as he only started working with the software in the spring of 2018. It started with sponsored licenses for his FIRST Robotics team and his interest and passion grew from there. The team was started by a classmate and Lucas was enamored right from the start.

A career in engineering is the goal for Lucas, with his main interests in mechanical engineering and Formula 1 racing; designing cars is of interest to him. He is currently working on designs for his FIRST Robotics Team at high school.

FIRST Robotics is fairly new at his school and he is currently the VP of the team. His friend, Kevin Bai, is the president of the team and recruited Lucas at the team’s inception, they now have 25 members. In the first year of competition, the team placed 16 out of 36 teams, which is amazing. Lucas is very dedicated to this cause. After the qualifying rounds, the team was rushing to prepare for the playoff competitions in Durham Regional where Lucas fell, breaking his arm. He tried to continue but after some time it became obvious that he need to go to the Emergency Room. The time of the return flight and the hospital visit prevented the team from taking part in the Playoffs.

Lucas’ interest in engineering and making things started with his Grandfather, who built his own CNC machine. Lucas would make things using this technology and wanted to do things faster, so he invested in a 3D printer. He started making small things and continues to share his knowledge with his younger sister. She is following in her big brother’s footsteps and continues to develop her interest in building and creating.

The family business uses large machines and Lucas gets his fill between his father’s shop and his Grandfather’s workshop.  His family is extremely supportive, and fully backed him with his aspirations of attending MIT (Massachusetts Institute of Technology) to study Engineering. 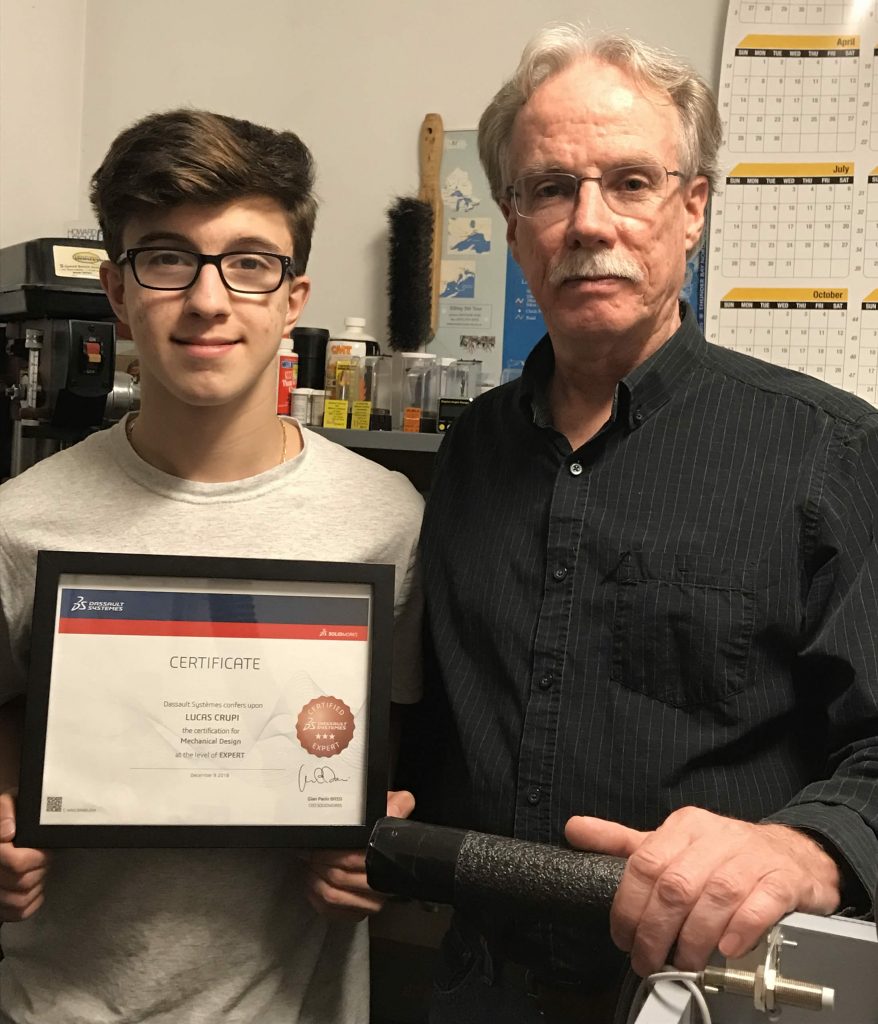 Lucas is self taught when it comes to SOLIDWORKS and used resources that Javelin Technologies provides online. We are honored that we were able to help Lucas reach this milestone.

In addition to his love of designing and building, Lucas is preparing for his Grade 8 Piano exam through the Royal Conservatory of Music.

He wants to be the next Elon Musk, but I feel that he will surpass that goal, with his eyes closed.

We wish you all the best as you start your journey and will be there to help you along the way in any way we can.

Canadian Academia Partnering with Local Industry is a Recipe for Innovation

SOLIDWORKS Manage: Bring processes together while teams are apart

Home › Resources › Lucas becomes a Certified SOLIDWORKS Expert (CSWE) at the age of 15!
Scroll To Top