From 3D Printed Jig Prototyping to Production at Ricoh

Founded more than 80 years ago, the Ricoh Company, Ltd., is no newcomer to imaging and solutions-based production. Although they have a decidedly shorter history with 3D printing, the multinational company still credits the additive technology for its success in rapid prototyping. But progress stands still for no one, and innovators at the company knew there was traction to be gained by expanding 3D printing beyond prototyping all the way to actual production.

“Jigs tooled from metal are both heavy and difficult to iterate,” said Masami Hirama, director of the Production Innovation Center. The heavy jigs required a proportionately heavier, wide workbench and operators frequently struggled to move the parts from the shelf to the workbench. Ricoh knew the solution to their problems lay in 3D printing and they set out to not only transform prototyping, but also begin 3D printing jigs for the production line.

From Prototyping to Manufacturing

“In a production line where each operator may account for 200 parts, eliminating assembly errors is very important,” said Hirama. Operators had been tasked with determining the orientation and angle to place the part each time, making precision difficult. The first step for Ricoh was implementing the Stratasys F900 3D Printer, which enabled faster build time and the use of well-rounded thermoplastics for advanced applications. The company put in place a moveable trolley, equipped with 3D printed jigs, designed so it could move in the sequence of operation. This has further reduced “the quantity of tools needed by 40%, along with the associated management costs. These reductions are realized because electric tools individually optimized for fixed workbenches are no longer needed,” said Hirama. 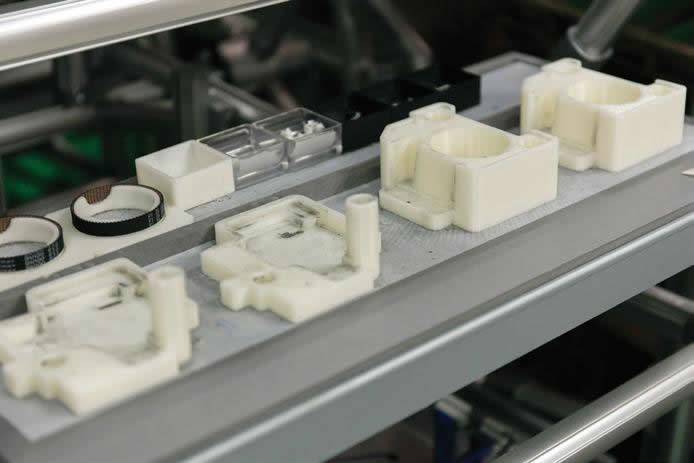 Jigs and fixtures that once took two weeks to produce can now be printed in a few hours.

Utilizing the high-flexibility of these plastic jigs enables the shape of the jigs to easily match the shape of the parts placed there. “These jigs are ultralight yet fully-functional, which has helped turn the Ricoh Industry assembly line into an example of innovative equipment,” said Hirama. Additionally, the trolley has reduced assembly errors and greatly shortened the time for new operators to become skilled from one week to two days,” said Hirama. “There used to be 12 assembly errors each month, on average,” said Hirama. “But there have been no assembly errors since the introduction of this new mobile workbench, made possible thanks to 3D printing.”

The factory floor at Ricoh continued to evolve as the special department moved from 3D printing a jig to designing jigs in optimized geometry and then 3D printing, further reducing the jig production time from two weeks to as little as a few hours. “Even complex shapes don’t increase lead times or cost,” said Taiki Saito, technical officer and senior development specialist. “Previously, shapes often changed before mass production so the jigs were not used in the pilot stage. But with 3D printing, jigs can be manufactured quickly so they are used from the beginning,” said Hirama.

“The materials are high strength, heat-resistant and functional, which makes them well-matched to their purpose,” said Hirama. As for the materials used with the 3D printer, “Stratasys FDM materials are anti-static which is no small thing given the high number of electronic parts used in manufacturing,” said Hirama.

“We provide the know-how developed within Ricoh and deliver it to our customers as a service,” said Hirama. “We are excited to bring 3D printing into our business, from prototyping for R&D, to the manufacturing of tools and now for production,” said Taizo Sakagi, senior manager of business development, Ricoh.

“We are excited to have discovered a way to bring three 3D printing applications into our  business, moving from advanced prototyping for R&D to manufacturing tools, and finally to production itself.”

The Effect of Hardware Upgrades on Maximizing Productivity in SOLIDWORKS