Since 2014, the Hudson Valley Additive Manufacturing Center (HVAMC) at SUNY New Paltz in upstate New York has been a 3D printing resource for both the university and surrounding communities. The HVAMC houses a variety of 3D printers and 3D printing technologies, including Stratasys PolyJet and FDM technologies. The team works with local businesses and individuals in several fields, creating everything from engineering prototypes to medical models. 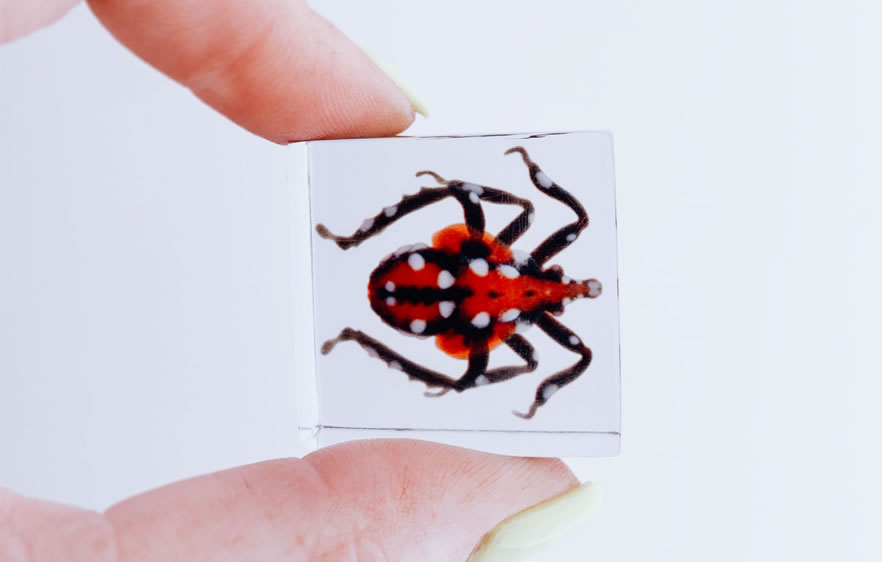 To prevent the insect from “hitchhiking” into New York, CCE wanted to inform and educate members of the agricultural community. It needed an effective way to help community members accurately identify spotted lanternflies in multiple developing stages. Previously, O’Connell and his team had been using posters and specimens preserved in alcohol. However, these methods had several drawbacks:

The HVAMC designed and 3D printed models of the spotted lanternfly with PolyJet technology – specifically, with the Stratasys J Series. The high resolution and full colour capabilities meant the team could create life-size, highly accurate models showing the full range of development stages. They encased the insect models in a cube of VeroUltraClear™ material, which meant the parts could be easily handled and transported. Best of all, these models retained their colour accuracy, unlike the preserved specimens.

Compared with the preservation method, which could take days or even weeks, the most complex 3D printed insect model took less than an hour to print. J series technology allowed for vibrant, highly accurate colours, and the VeroUltraClear provided 100% transparency so that the insects could be seen clearly and handled easily. The team at CCE plans to circulate 3D printed models of the spotted lanternfly all over New York State to raise awareness of the invasive species.