For many years RUSTIN has deployed traditional design and manufacturing techniques to develop prototypes and final parts for customers, as well as for its own internal production line tooling requirements. In more recent times, the company has faced challenges to increase the efficiency of these applications and introduce more flexibility into production.

To achieve this objective, while also ensuring there was no compromise to quality standards, RUSTIN identified additive manufacturing to complement its operations.

Created at the turn of the 20th Century, France based RUSTIN’s pioneering heritage can be traced directly back to its founder, Louis Rustin, a cyclist and tire repairer who is acknowledged as being the inventor of the puncture patch – still known as “rustines” to this day in France. Having expanded into other areas of the rubber industry over the last hundred years, the company is now a leader in the design, development and production of advanced rubber and silicone sealing systems for an array of applications that ensure water or dust-proofness, airtightness, or noise isolation.

Led by its founder’s great-grandson, also named Louis, the company’s solutions are particularly sought by those operating within the rail sector. Among them is Alstom, a rolling stock provider, and the SCNF, France’s national railway company.

Having already experimented with a number of industrial-grade additive manufacturing technologies, RUSTIN decided to invest in an FDM®-based Stratasys Fortus 450mc™ 3D printer for its facility. The Fortus 450mc made such an immediate impact that RUSTIN subsequently strengthened its design and production capability with the addition of a Stratasys F370™ 3D printer.

“Having seen a demonstration of the Fortus 450mc, our minds were made up quickly. It is an easy-to-operate, industrial-level solution that offers a comprehensive portfolio of high performance materials,” explains Louis Rustin, Managing Director, RUSTIN. “Importantly, we needed something that would enable us to develop production-line tooling quickly and cost-effectively – everything from cutting guides and jigs to pliers – without the need for machining.” According to Rustin, the reduction in tool production lead times since using the Fortus 450mc has been a huge benefit for the company.

“It’s about time, operational speed and production capabilities, and with FDM additive manufacturing, we have more of each than we would with traditional machining methods,” he says. 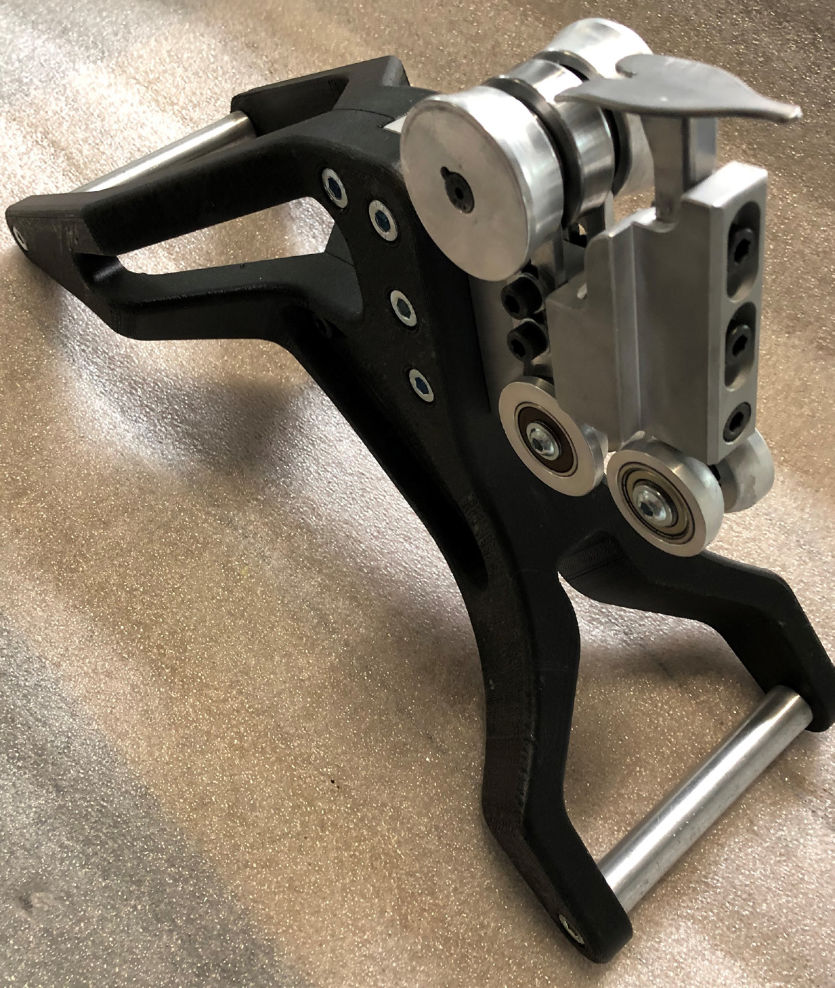 Looking at this from a quantifiable perspective, the company says that the difference is witnessed in the lead-time savings when comparing traditionally produced tooling with those created via additive manufacturing.

“The time savings are enormous and it is no exaggeration to say that we’re comparing something that would take up to five or six weeks, versus having something in our hands within just a few days,” adds Guillaume Rigaud, CAD designer/ developer at RUSTIN. As well as producing tooling completely in FDM materials like ABS, ULTEM™ 9085 resin, and FDM Nylon12 CF™ (carbon fiber), RUSTIN often develops items that combine 3D printed parts with those produced in metal.

“The flexibility of additive manufacturing allows us to blend materials according to requirements, but it’s definitely fair to say that, due to the complexity of certain components, much of what we produce with the technology wouldn’t be possible through other more basic machining methods. With FDM additive manufacturing, we can produce any tool design we want – even complex items – in just one step. The technology removes barriers for us”.

RUSTIN clearly recognizes that time-savings and improved production agility naturally enhance capacity levels and overall responsiveness to customers. This is why, despite some significant cost savings, it has been quick to assess the value of its Stratasys investment in overall terms, as opposed to merely comparing the cost per part using additive manufacturing to that of traditional methods.

“From a cost perspective, it is around 50% less expensive to produce production tooling or parts with FDM additive manufacturing compared to traditional machining – but I would maintain that isolating the cost alone to produce something just doesn’t give you the full picture,” explains Louis Rustin. “With our Fortus 450mc, we have less machine downtime, less capital and less labor, which means we can redistribute manpower elsewhere.

The push-and-play element of the technology means that once a print job has been set to run, the operator can do something else. That’s a hidden, but also very obvious advantage that is extremely important, as it increases our overall performance, reactiveness and ability to serve our customers more quickly,” he adds. Rigaud cites an example from Alstom, a Rustin customer, involving the failure of a production line motor air duct, which halted manufacturing. Rustin used its Fortus 450mc to quickly make components to fix the duct using ULTEM™ 9085 resin, allowing production to continue.

“We received the request from Alstom and had their production line back up and running inside of four days, which was much more favourable than the several weeks they would have been looking at to have traditional parts made and installed,” says Rigaud. 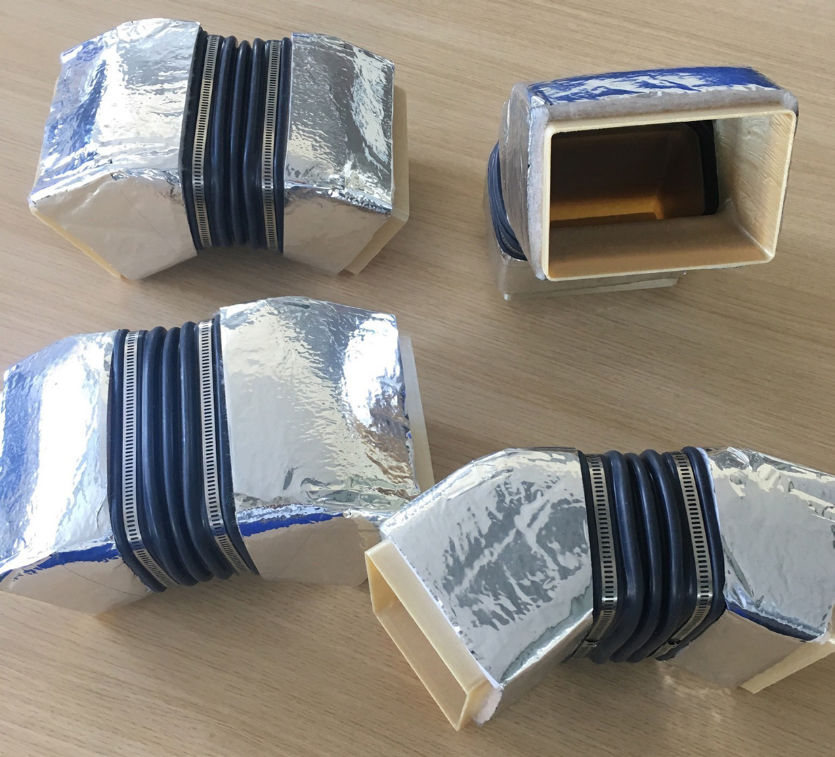 RUSTIN minimized downtime on Alstom’s production lines by producing end connectors for a right-angled joint that were 3D printed in ULTEM™ 9085 resin.

While the Fortus 450mc spearheads much of the additive manufacturing production projects undertaken by RUSTIN, the Stratasys F370 provides an admirable complement that lets the company add rubber-like materials to its range. RUSTIN’s F370 currently accounts for around a third of jobs handled by the company. “The F370 has been a great addition to our hardware line-up. It’s easy to set up and get running, and the fact that we don’t need to change the nozzle heads saves a lot of time,” says Rigaud. “We mainly run FDM™ TPU 92A material for functional prototyping applications, as it’s a resilient thermoplastic polyurethane with great flexibility and tear resistance. This makes it perfect for testing, such as assembly tests on air conditioning unit seals, as well as for iterations to gaskets. It gives us a clear view on things when it comes to assembly.”

For RUSTIN, the Stratasys Fortus 450mc and F370 provide a perfect combination to differentiate its service offering and sharpen its competitive edge from that of other companies in the same field. The improved ability to respond to urgent and exacting customer requirements is particularly important.

It is also fitting that the company still upholds the very raison-d’etre upon which it was founded over 120 years ago, with a technology designed specifically to provide a rapid solution to ensure continued operation.

“The nature of the problems our customers bring to us typically does not afford us several weeks to solve. It’s all about reaction speed, and the flexibility of additive manufacturing gives us the versatility to solve critical issues in just a few days. As long as we can do that, then we satisfy customers and keep them coming back, which is what it is all about,” Louis Rustin concludes.