To create a highly-detailed 3D model of a historical bronze monument for the then-upcoming 200th anniversary of Napoleon’s return from exile an Artec handheld 3D scanner was used to digitally capture the entire monument and ultimately create a viewable/printable 3D model.

Benjamin Moreno, the CEO of IMA Solutions SARL, based in Toulouse, France. IMA Solutions employ 3D scanning and visualization to develop new multimedia tools, such as 3D interactive systems, for the world’s leading museums. Among their clients are the British Museum, the Acropolis Museum and the Louvre-Lens art museum located in Lens, northern France.

Benjamin created a ready-to-print 3D model of a bronze monument to Napoleon on horseback, which he scanned using an Artec Eva 3D scanner and Artec Studio software. You can download the following model in OBJ format.

The task was commissioned by the Musée de la Révolution Française in Vizille, France, with a view to preserving the monument’s 3D copy for posterity and preparing a 3D model for an exhibition celebrating the 200th anniversary of Napoleon’s return to France from his exile on the island of Elba. The monument, cast by the famous French sculptor Emmanuel Frémiet in 1867, is located near the neighboring village of Laffrey.

“I’ve already 3D scanned some artworks representing horses and each time I think: that’s one of the hardest things to scan because of the legs and hidden areas,” Benjamin says.

“In the past I used other 3D scanner equipment like laser heads mounted on arms and I can say that only Artec technology is able to perform 3D scanning of this kind of artwork on the fly or in hard environmental conditions.”

“Also, Artec scanners grab textures in real-time and this is a really great feature,” he adds. “Before that, we’d grab 3D geometry using a laser scanner, then make many pictures to reproject texture on the 3D model by hand. That was a really time consuming task and not really precise because of human intervention. Now textures are perfectly captured and mapped on the geometry. The acquisition time has been reduced 5 to 10 times depending on the object to 3D scan. Also, some masterpieces we 3D scan today cannot be scanned with other kind of 3D systems than Artec 3D. I often say to my clients: this kind of 3D acquisition was not possible before Artec equipment went to the market!” 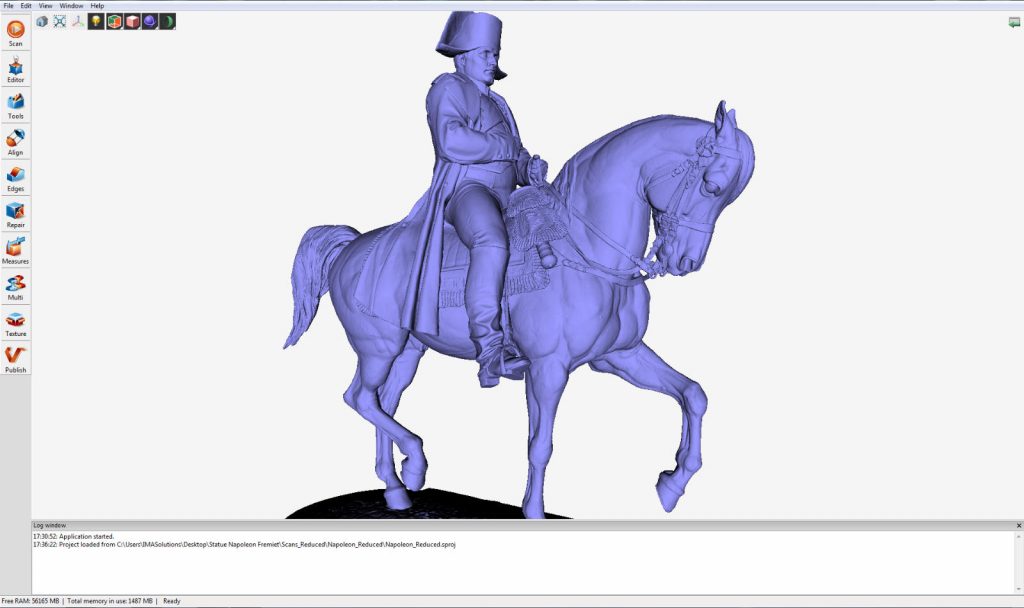 With the Napoleon monument, the only prop Benjamin needed was a scaffold to access the monument from all sides, and the museum provided him with one. He also made sure to bring a battery pack to the site, which he used mainly when scanning the upper part of the monument. Most of the time Benjamin worked with a laptop and the Eva plugged into a generator. “What is limiting in terms of 3D scanning with the battery pack is not the Artec battery pack but the battery of the computer!” Benjamin says. 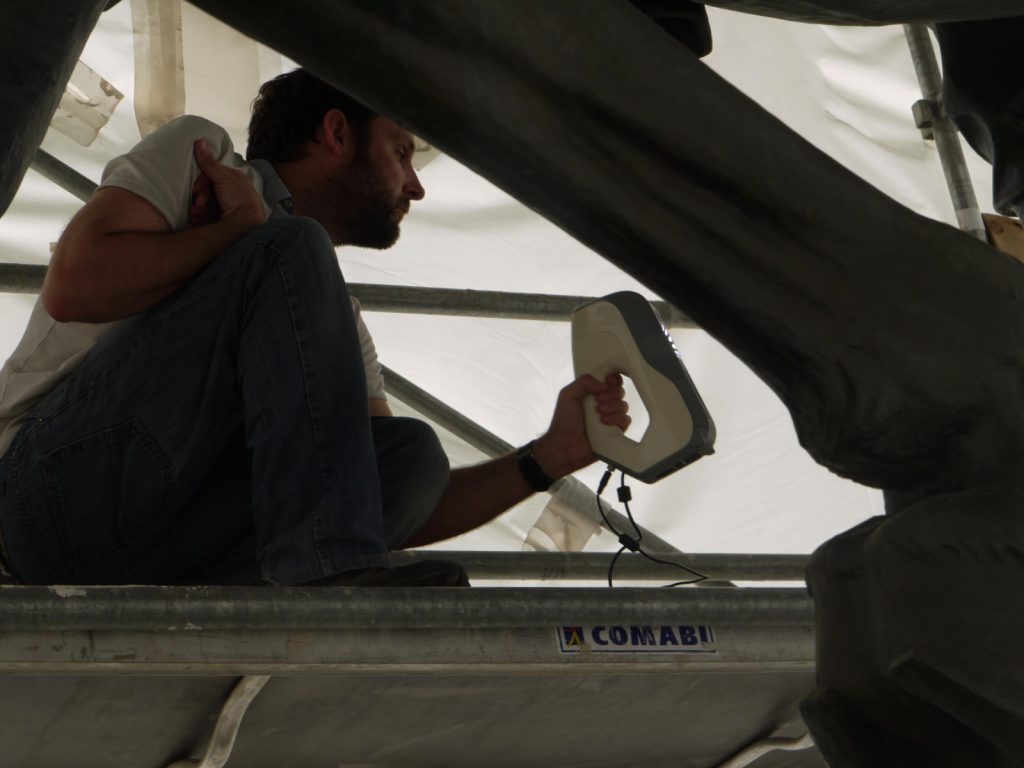 In fact Benjamin uses the battery pack quite often. Recently he scanned an engraved prehistoric artwork depicting a mammoth, for which he had to take to a cave hidden four meters below the ground. “I was able to 3D scan quickly on site using Eva and the battery pack,” Benjamin says.

Because the surface area of the Napoleon monument was quite large, Benjamin developed his own 3D scanning strategy for the project: “I divided my work into 18 areas taking care of having big overlapping areas for post-production alignment.”

Scanning took two days in total and post-production another 10 days because of the huge amount of data, 57 GB. To streamline it, Benjamin did sharp fusion at the 1 mm resolution for each of the 18 scanning sessions. Each was around 25 million polygons, so he decimated them to 1.5 million polygons. Then he performed non-rigid alignment and sharp fusion at 1 mm, which landed him at just 20 million polygons. Finally, he used textured frames to apply texture to the resulting optimized geometrical model and made some tweaks in Zbrush. 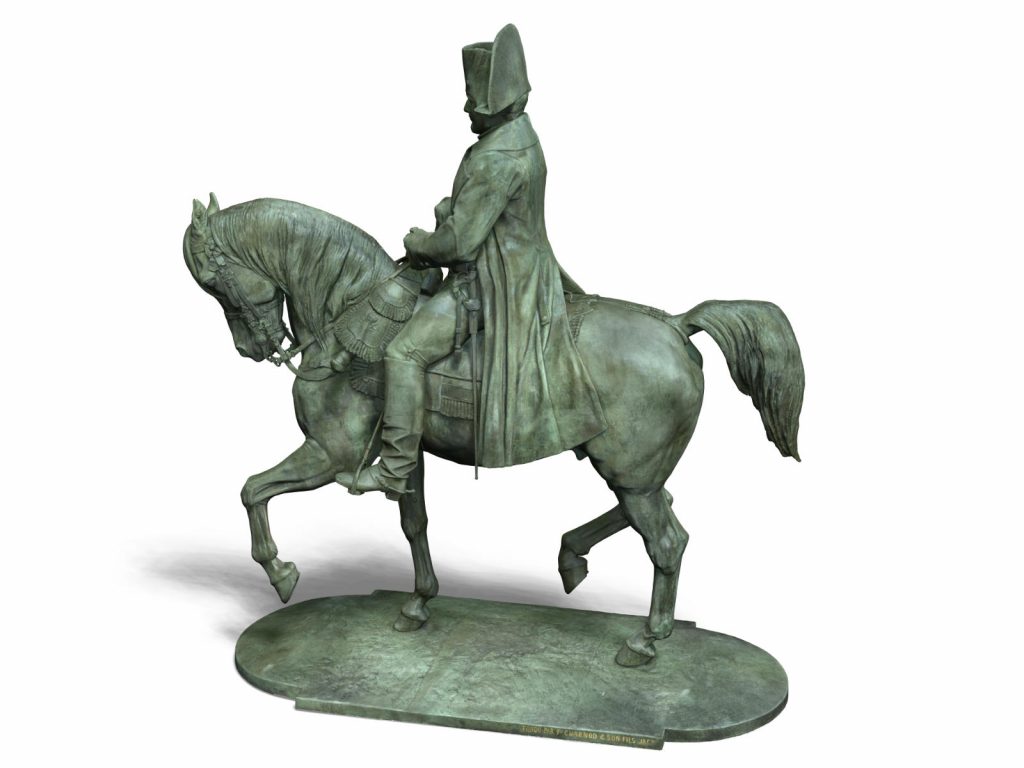 “The museum is really happy with the result, especially because they can now manipulate the 3D model virtually and see the monument from any angle with a click of a mouse!” Benjamin says.

Discover the limitless possibilities of 3D scanning with the portable 3D devices. Lightweight, mobile and compatible with several popular tablets.

Artec scanners can be used absolutely anywhere to ensure a smooth capturing process without having to relocate objects to a particular place.