In order to push the boundaries of innovation for every vehicle designed, Italdesign leverages a number of technologies – with Stratasys additive manufacturing at the forefront. This includes a wide range of PolyJet™ and FDM® 3D printers.

Founded in 1968 in Moncalieri, Italy, Italdesign is best known for its automotive design work for both concept and production cars. At the Barcelona division, the R&D team has built a strong reputation for its creative design techniques and deployment of innovative technologies to bring their concepts to life.

Italdesign R&D team were challenged to construct the company’s 2019 concept car, the Italdesign DaVinci, in time for its inauguration at the Geneva Motor Show. The idea behind the DaVinci car is to revive the best of Italian elegance, integrating different luxury materials and textures within the interior that reflect the avant-garde style of the outer body.

Having explored a number of the ways in which this material sophistication could be achieved, The Italdesign DaVinci concept car. 3D printed air conditioning diffusor with marble effect, made with a Stratasys 3D printer. the use of marble had strong appeal due to its elegant appearance and finish. However, producing such parts in time for the show using the traditional stonemasonry process was not possible. 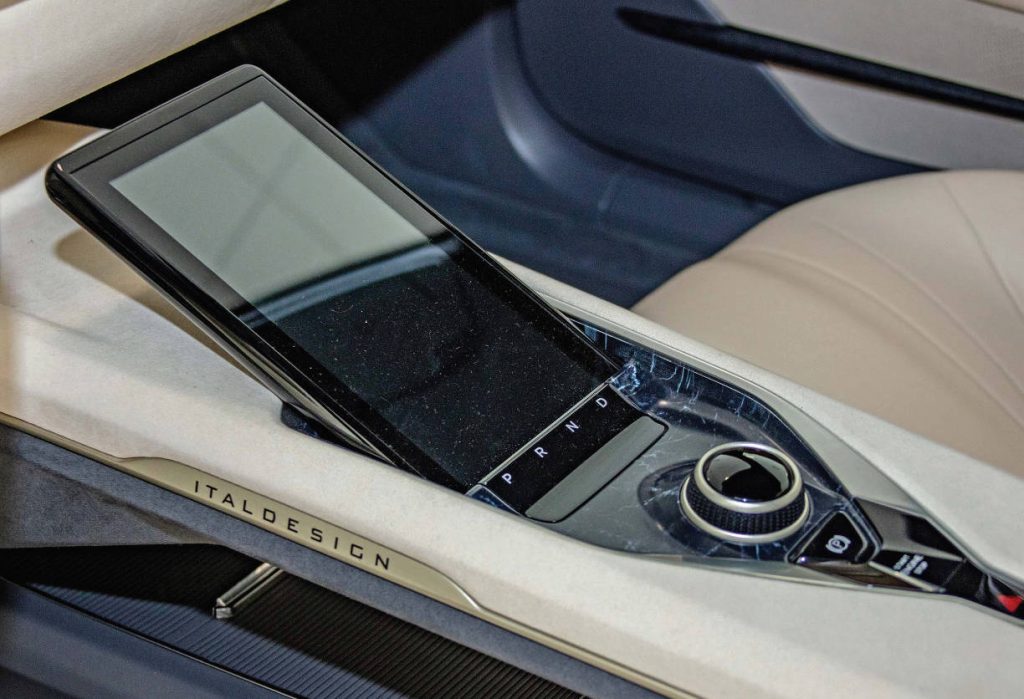 “We identified the key areas of the vehicle interior we wanted to produce in marble – the central console, air conditioning diffusors and door inlays – but quickly realized that we couldn’t use traditional techniques to achieve the marble finish in the remaining timeframe we had ahead of the Geneva Motor Show,” explained Agulló. To overcome these obstacles, Italdesign looked for technology alternatives capable of providing an ultra-realistic imitation marble, including the color nuances and feel – all within the tight deadline. Having tested several possible solutions, the team turned to the Stratasys J Series and its unique capability to 3D print marble effects and textures directly onto parts. To achieve this, the team designed each part via CAD and using a render software, digitally overlaid the marble texture onto the part to deliver the desired effect. Once the design was validated, the final file was uploaded to GrabCAD Print™ to enable printing.

Reimagining the Cars of Tomorrow

“Instead of several weeks of work, in just over a weekend we were able to produce four air conditioning diffusers, two door inlays and the central console,” he continued. “Everyone was taken aback by the results, both in terms of the resolution accuracy and material quality – so much so that no design iterations were required. In fact, we started 3D printing on the Friday and by Monday morning, the final parts were ready to be presented to the Italian headquarters for validation.”

Italdesign intends to use its 3D printer to influence future car designs in a similar vein to the marble effects implemented within the DaVinci concept car.

"With the addition of the Stratasys PolyJet 3D Printer and its unique capabilities, we have been able to expand our offering even further and undertake completely new interior design concepts with ultra-realistic appearance, feel and textures for our automotive customers that would simply not be possible with any other technology.”