Korea-based Innodesign was founded in Silicon Valley in 1986 by design guru and unflinching innovator Kim Young-se. Chosen as one of the world’s top 10 design groups by Nikkei BP in Japan 2009, Innodesign is known for adding winsome touches to the designs of many sought-after consumer products across the globe, such as LG Electronics’ double-door refrigerator, Samsung’s cutting-edge clamshell cellphone and Laneige’s Foundation Sliding Pact.

As its name suggests, the company constantly looks for ways to improve and innovate their designs during the concept and rendering process. Kim often questioned why the design industry was not changing at the same pace as other industries going through digital transformations, until he was ushered into a new world by the Stratasys J750™ 3D Printer.

Even as an experienced user of digital fabrication technology including 3D printing, Kim was surprised by the unprecedented realism provided by the Stratasys J750. “Digital technology has become the backbone to support a person’s wildest ideas and concepts, making things happen in the design world while keeping the concept as original as a model can be, regardless of its design complexity and fabrication technicality,” Kim said.

With the Stratasys J750, the Innodesign team brings new products to life by 3D printing models in multi-materials and in as many colours as their designers can assign. The multi-colour, multi-material 3D printer adds value to the team in addition to the aesthetic benefits of prototypes. What used to be a monochromatic model has now become photorealistic prototype made possible through the automatic colour mapping function, 360,000 colour options and an unmatched range of materials. 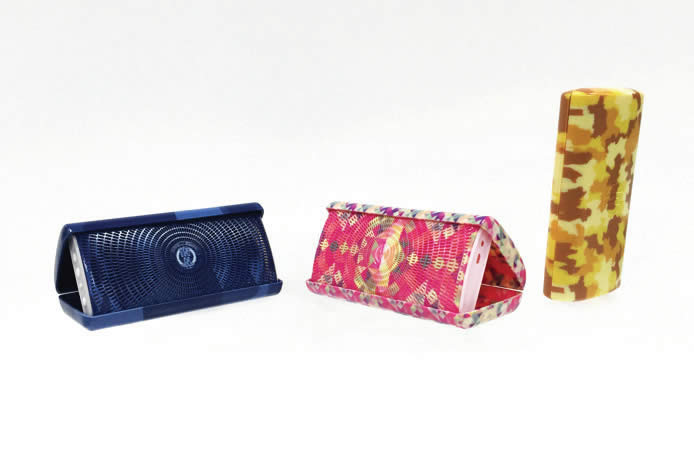 To test the capability of the Stratasys J750, Kim and his team used one of their headphone designs and mapped different patterns according to customer’s original request. The result? “It was unexpectedly successful and everybody was happy about the fine details and the original colour the 3D printer was able to reproduce,” said Kim.

At the Stratasys J750 launch event at the Dongdaemun Design Plaza, a hub famous for its cultivation in modern design coupled with cutting-edge technology, the audience was able to witness the multi-colour, multi-material 3D printed headphones will full photorealism firsthand.

Innodesign says the Stratasys J750 3D Printer is the first 3D printer that answers all of their needs in texture and colour mapping, saving them massive amounts of time and cost in their conceptualization and professional rendering process. In their previous fabrication methods, 3D printed prototypes went through post processing steps, including sanding, lacquering and silicon engraving. With the Stratasys J750, the team can take care of everything in fewer steps, giving them more time for their designs. Innodesign has yet to find any drawback to the Stratasys J750 3D Printer.

3D printing enables Innodesign to reproduce product-matching prototypes at a fraction of the original cost through traditional fabrication methods. Before 3D printing, creating a concept model cost the team $900 to $1,300 while producing a high-fidelity functional prototype cost $2,700 to $4,500. The Stratasys J750 3D Printer, however, blurs the line between concept mockups and high-fidelity prototypes. Now, creating a functional prototype with full photorealistic patterns costs less than $100. The time used in prototyping has also been reduced from two weeks to 8 hours, making the product development cycle more efficient and streamlining go-to-market plans for Innodesign and its partners.

Create prototypes that look, feel and operate like finished products, without the need for painting or assembly. With an astounding 500,000+ colour combinations to choose from and multi-material capability, you can bring even your most imaginative ideas to life.

“The Stratasys J750 truly amazes everyone on the team, and boosts the energy for designers to keep thinking out of the box for more and better ideas. We look forward to opening up a whole new world full of colourful and new designs together with Stratasys”