Customization is the name of the game for Utah Trikes, a producer of trikes, quads and custom wheelchairs, located in Payson, Utah.

President and CEO, Ashley Guy, said from the very beginning the company was all about personalization. “We started making our quad using existing frame platforms and built custom two-wheel drive rear ends that we’d add on and effectively turn the trikes into quads. That grew into something where suddenly everybody who wanted something customized came to us.”

But customization has its obstacles, namely time and cost. “The production run might only be 100 parts and it’s hard to get your cost down with such a small run,” said Guy. Utah Trikes’ next step was trying to solve its manufacturing issues. “We have some CNC machines we ran pretty much nonstop,” Guy said. “But this was always a hassle without committing to jigs and fixtures, which meant a lot of man hours to prototype.” Also, as the parts became more complicated it became harder and harder for Utah Trikes to outsource.

What Utah Trikes needed was the ability to make prototype pieces they could actually test, and that would be both cost and time efficient. About this time, 3D printing showed up on Guy’s radar. “I was intrigued but had no idea what I was looking for. But it didn’t take long for Guy and his team to see what 3D printing could do for them.”

A Whole New Way to Design

With 3D printing, the design process is no longer impeded by machining restrictions. “I no longer have to constrain my designs because of prototyping limitations. Now I can focus on designing better, more functional parts, without worrying about how to shape the aluminum or how to lay up carbon fiber onto the molds,” said Guy.

The ability to quickly go from design to in-use part means designers at Utah Trikes can now spend a lot more time perfecting their designs. Guy has made sure the entire team at Utah Trikes now has access to SOLIDWORKS 3D CAD software so they can easily design and then print their designs. “Even the machinists can design to fit their needs, then simply print it out,” Guy said. “It’s taken me a while to wrap my brain around the idea that we can now design for functionality rather than machining.”

But there was still the issue of being able to test their new designs. In his quest to find printers that could make real production parts, Guy’s investigation led him to Stratasys Fortus 3D printers. “We started out using Nylon 12 material and it got us about 75% of the way there,” Guy said. “We made a quad prototype using parts printed with other materials that were either too brittle or too flexible.” It wasn’t until Guy tried FDM Nylon 12 Carbon Fiber that he realized he had found a tool that would change his business. 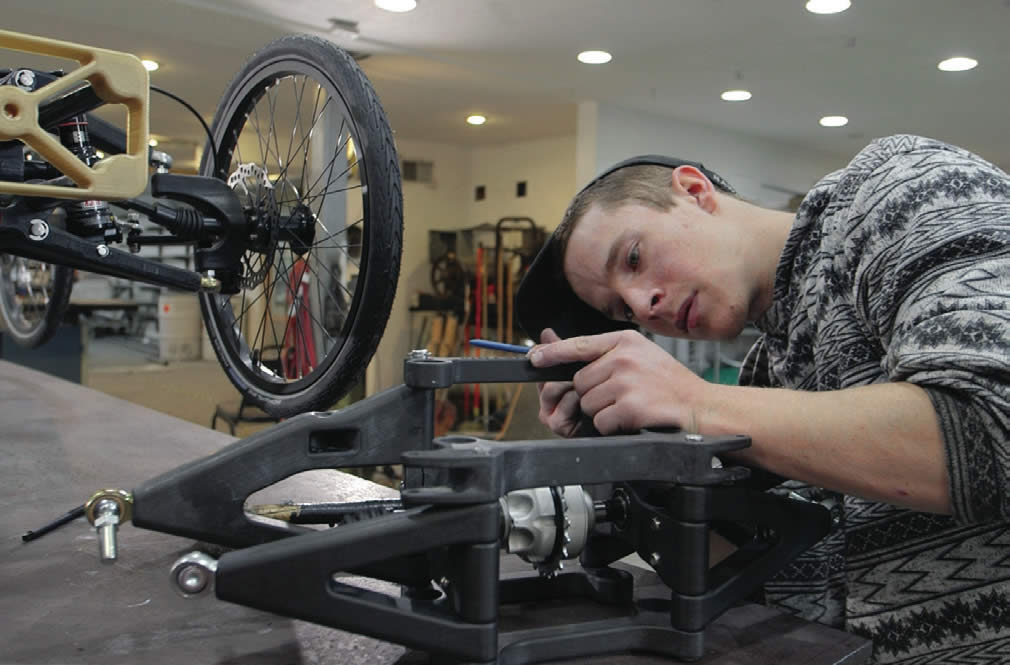 The ability to use Stratasys FDM Nylon 12CF in all stages of the manufacturing process is a game-changer for Utah Trikes.

“The FDM Nylon 12CF is fantastic. It’s changing everything for us,” Guy said. He cites the strength of the material, as well as its soluble support as game changers. Additionally, “We can take the part and put it into our tumbler overnight and it comes out with a smooth, polished finish,” said Guy.

The new carbon-fiber version of FDM Nylon 12 was just right, according to Guy. “Let’s face it, when it came down to bolting a part on a trike and heading down a hill on it, it was only the Stratasys FDM Nylon 12CF that held up.” A pedal-powered wheelchair in production at Utah Trikes has 450 distinct parts, 120 of which are 3D printed. Also game-changing for the custom manufacturer is their ability to now design and print on-site, which has cut production time from two months to two weeks, reducing the company’s costs 8-10 times.

“Stratasys FDM Nylon 12CF parts can be printed faster, with superior stiffness-to-weight performance and with better repeatability than any other 3D printing technology we’ve seen.”

Guy cites the superior mechanical properties of FDM Nylon 12CF Carbon Fiber and its ability to be used in all stages of the manufacturing process, from rapid prototyping to jigs and fixtures to final production parts for short-runs and custom orders. “With FDM Nylon 12CF, we’re able to make parts we wouldn’t otherwise be able to make.”