Founded in 1994, Angel Trains is the leading rolling stock provider for the UK rail industry, financing and delivering high-quality trains to UK passenger service operators. Each year, it makes significant investment in innovative solutions to modernize and improve UK train fleets. One of the company’s biggest challenges is finding an alternative to the traditional supply chain for replacement parts, which struggles to cope with growing demands.

Unlike the automotive industry, where vehicles are mass produced in millions each year, the number of fleets in the rail industry is comparatively very small and over 30 years old in some cases. This combination presents several challenges for train operators, especially regarding vehicle maintenance and part replacement.

“In recent times, we’ve seen growing concern among operators that sourcing replacement parts for older train fleets at a reasonable cost and in a short timeframe is proving increasingly difficult,” explained James Brown, Data and Performance Engineer at Angel Trains. “The problem is that traditional manufacturing methods only make it cost-effective to produce high volumes of spare parts, even though an operator may only need a few obsolete train parts replaced. Lead times can also take months, exacerbating the issue even further.”

As a result, Angel Trains teamed up with engineering consultancy DB ESG, and Stratasys, to show train operators how they can overcome these hurdles by 3D printing lower quantities of parts in a fraction of the time and cost of traditional methods. This cross-industry collaboration soon resulted in the first 3D printed parts ever deployed within an in-service passenger train in the UK. They included four passenger armrests and seven grab handles, installed on Chiltern Railways’ trains. 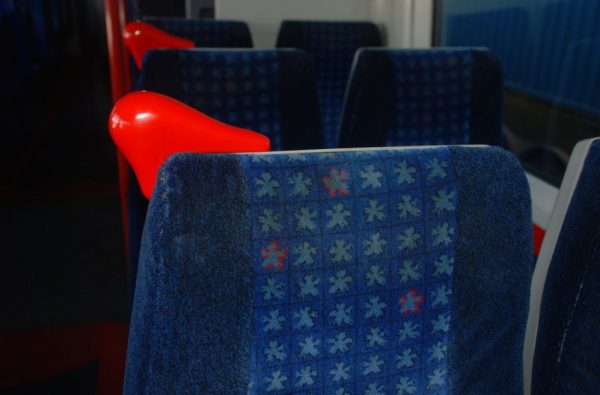 The lead time for this part using conventional manufacturing would be approximately four months. However, according to Brown, the final armrest can be produced within one week with Stratasys’ Rail Industry Solution, representing a lead-time decrease of almost 94%. Brown also believes that cost savings of up to 50% per part are achievable.

Similarly, in the case of the on-seat grab handle, the replacement part was obsolete and the original supplier was no longer in operation. To make new grab handles, a new manufacturing tool would have been required, costing up to £15,000, with an expected lead time of two and a half months. With the Rail Industry Solution, the grab handles were produced in just three weeks at a significantly lower cost per part.

“This is an exciting time for the UK rail industry,” said Brown. “With Stratasys’ Rail Industry Solution, train operators can be much more responsive to replacing passenger-facing parts that get damaged or vandalized. An obsolete replacement part can be 3D printed on demand and installed immediately, enabling operators to get vehicles back into service quicker and better maintain their trains – improving the quality of service for passengers.”

To overcome the challenge of certifying 3D printed parts for use in passenger trains, DB ESG conducted comprehensive testing on a range of industrial-grade 3D printing materials. The final parts were 3D printed in ULTEM™ 9085 resin using a Stratasys Fortus 450mc™ 3D printer. The highly accurate production printer features a large heated build chamber, so parts meet the strict tolerances and repeatability requirements of industry, as well as allowing large single parts or multiple smaller parts to be printed in one run. Last year, ULTEM™ 9085 resin was certified to the rail industry’s fire, smoke and toxicity standard, EN45545-2, a first for the rail industry.

Martin Stevens, Mechanical Engineering Manager DB ESG commented, “Gaining this certification removes a major barrier that has prevented more widespread implementation of 3D printing across UK trains. Our role in this project has been to investigate the design, production and finishing of parts produced using Stratasys FDM technology, verifying whether the parts comply with rail standards and checking whether they work in the operating environments. We have also optimized the component design of FDM manufacture.”

With low-volume production now achievable, Angel Trains is already exploring how it can leverage the Rail Industry Solution to customize interiors better suited to the passenger commute.

“We’ve tested 3D-printed seat-back tables with braille, informing the passenger that the toilet is ten rows back from that particular seat,” said Brown. “This level of customization is unprecedented and can only be enabled by 3D printing, offering the potential to significantly improve passenger experience in the future.”

Following the success of the Chiltern Railways trial, the group has established a repeatable process for future projects that produces parts compliant with rail industry standards that are suitable for use in passenger vehicles. With positive responses from train operators, the three-way consortium will be extending the deployment of 3D printed parts onto UK passenger trains with another train operator, the latest trial designed to transform rail production as we know it.