Doosan Infracore is a global leader in the production of heavy duty, best-of-breed excavation equipment. Until recently, the company created prototype models using CNC and silicon molds, or it would outsource its concept modeling to a service provider. Outsourcing was slow, however, and the resulting models were not printed in fine enough detail.

Doosan Infracore installed the Objet Eden260VS 3D Printer in-house at its design headquarters because of the printer’s ease of use and speed. Doosan Infracore saw immediate benefits from the printer’s ability to produce fully cured concept models more quickly – no matter how complex the design. The result radically decreased production costs and times, and increased creativity.

“Concept modeling before we had the Objet Eden260VS 3D Printer was a lengthy and wasteful process,” says Yoonkwan Park, senior designer. “After design, the project went to manufacturing, and then it took a few months until the complete concept model was ready. This was expensive, and I was always concerned about exposing our cutting-edge designs to a third party.”

“The Eden 3D printer is the perfect solution for preparing concept models in our industry. It is useful for a multitude of applications such as dyeing and chrome coating. It is also good at silicon molding because of its fine surface detailing. This further increases its value.”

Doosan Infracore integrated the 3D printer into its production processes and uses this machine to print concept models and cure parts.Recently, Doosan Infracore won a commendation in one of the world’s most prestigious design competitions. The 2009 Red Dot Competition attracted more than 2,733 entries, of which only 15 received a “best of the best” commendation. Doosan Infracore’s award-winning model, built on the Objet Eden 3D Printer, was the CX Eco Transformer, an innovative excavator scheduled for release in 2018. The CX Eco Transformer was chosen by Red Dot for its ecological soundness, safety, usability and efficiency. 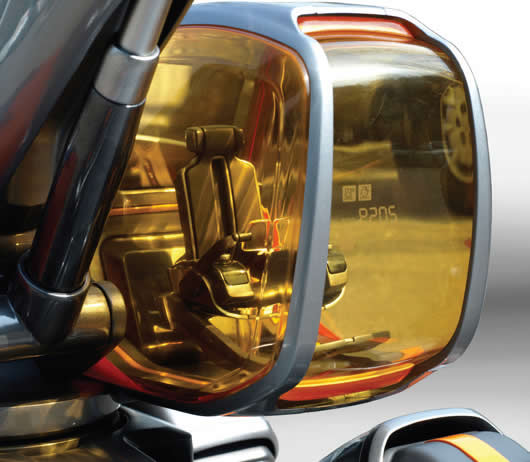 In order to take part in the Red Dot Design Award, Doosan Infracore prepared a concept model using the Objet Eden260VS Printer and Rigid Opaque material. This robust material offers a wide range of mechanical properties, including the ability to withstand bending. It has good impact strength and high contrast between the model and support materials. In addition, the surfaces enhance visualization of details and edges. The company had only a very short lead time, and Park says that without the Eden 3D Printer, “I do not think we could have met the lead time on this project. Our processes are so much faster and simpler now.”

“Other rapid prototyping machines are very limited; they cannot print fine detail and are terrible at post-processing. In contrast, the Objet Eden260VS provides superb 3D printing.”

How to Optimize Production for Agile Manufacturing

Efficient Design for the Oil and Gas Industry