3D Scanning tested against Photography in a study on Forensic Methods

Traditionally, forensic pathologists have documented scenes of crime and autopsies with the aid of photography. However, as the research conducted by Janujah Sivanandan and Eugene Liscio (University of Toronto) underlines, the 2D images cameras generate lack crucial data that only spatial relations between objects can create.

The objective of the experiment was to put conventional forensic methods to the test by comparing them to 3D imaging technology. For their experiment, the researchers chose Artec Eva structured light 3D scanner to determine how well it measured up against current photographic documentation tools.

For this particular experiment, a live participant was given 11 temporary tattoos on various regions of their body. This way the authors of the study could assess the performance of 3D scanners in obtaining, firstly, high quality colour – an element in forensic pathology that can reveal much beyond the identity of the victim vis-à-vis body modifications. 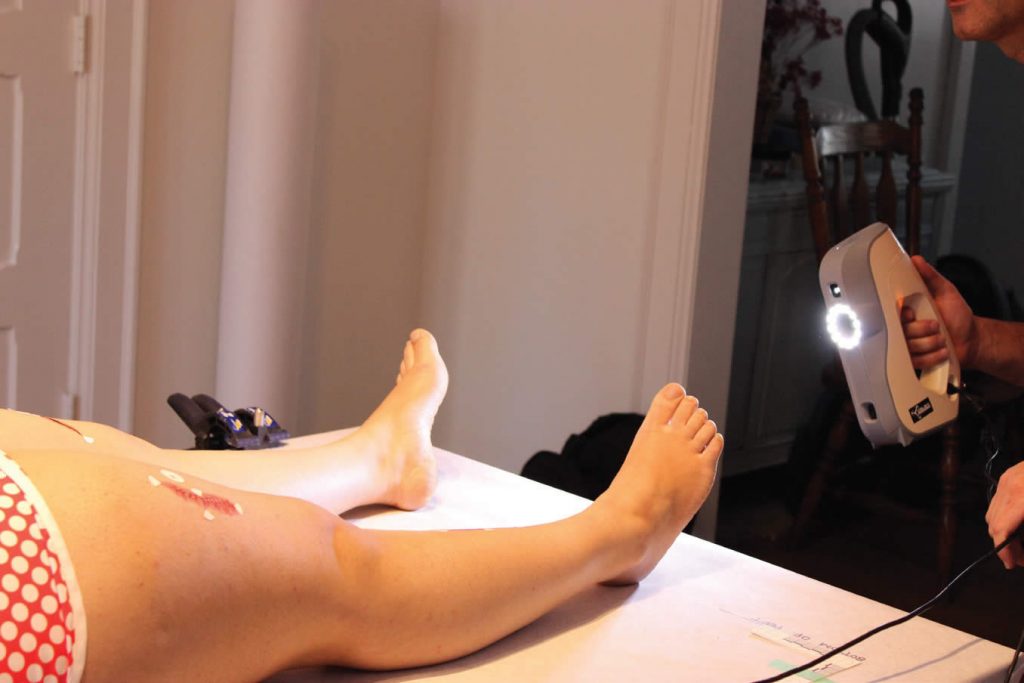 Artec Eva being used to scan a live participant

The experiment consisted of two tests performed and observed under uniform conditions: one for photography and the other for Artec Eva. In the first test, the participant was asked to lie down. To register distances, a tape measure was used throughout with reference to orientation sites of the face and body (i.e., nose, elbows, knees, etc.). The body was then photographed along with scaling drawn out on the sides of the table. Meanwhile, additional photographs of the injuries were made at closer ranges.

With Artec Eva, for the second test, the process was noticeably smoother. The body of the participant was scanned several times with the 3D imager. Artec Studio’s geodesic tool helped record measurements of injuries and curvatures. A colour map was applied in order to register colour. Meanwhile, during the scan, the output on the computer displayed 3D mesh data or point clouds, which help with adjusting viewing angles and orientations. Notably, they result in meshed surface data which allows for higher resolution. The platform for these scans was Artec Studio 3D scan software, where the images underwent alignment and fusion for the assembly of the 3D digital replica. 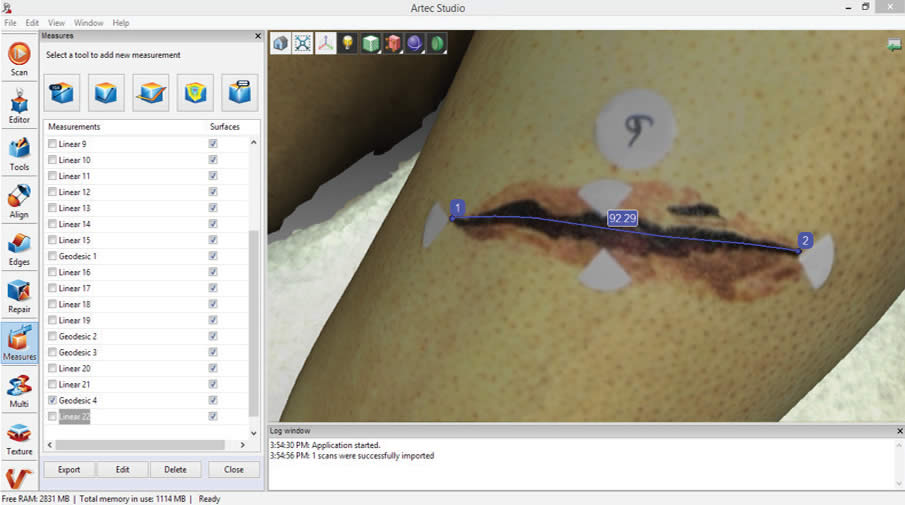 Users of 3D data truly benefit from the flexibility and versatility with which the images can be manipulated and viewed. They allow for a greater range of use, thus providing a fuller and more realistic account, in this case, to forensic pathologists. For the purposes of the experiment, the authors of the study attempted to recreate the trajectory of a bullet entering the body. They erected tripods at the sides of the examination table and placed steel rods to represent the bullet’s path. Due to their gloss, rods are often hard to capture, especially for structured light scanners, where the conflicting light sources generate a great deal of noise.

Nevertheless, Artec Eva handled the task well. Such exercise would have been out of the question for photographic documentation, which fails to convey geometries.

Indeed, the capacity of Artec Eva to reproduce geometric details proved the most effective improvement when one compares it to conventional forensic methods. Its combined capacity to capture color is also noteworthy. Yet the authors of the study did not stop there. They also pursued a parallel inquiry, namely how easy these methods were and how error-free these devices were. To quantify ease of photographing and 3D scanning, the experimenters devised a method for calculating efficiency and ease of use.

The method constituted a scoring system based on technical difficulty and the time spent on documenting. The results were immediately evident. While it took exactly 54 minutes and 30 seconds to complete full photographic documentation, Artec Eva beat out the conventional method by nearly half at a swift 26 minutes and 1 second.

The researchers from the University of Toronto concluded that Artec Eva held substantial advantages over current forensic documentation methods. Not only did Artec Eva record colour better than photo cameras, it could also render rich datasets in 3D without any of the technological complexity.

Moreover, its generated 3D data can reveal and preserve findings more tangibly and efficiently. Of particular note is the apparent “freshness” that the data retains whether now or in posterity. In other words, the difficulty of having to recreate the crime scene is virtually eliminated with Artec Eva.

"While it took exactly 54 minutes and 30 seconds to complete full photographic documentation, Artec Eva beat out the conventional method by nearly half at a swift 26 minutes and 1 second."

How to Scan Multiple Parts with multiple GOM 3D Scanners